Awareness and treatment of Diabetes

Why is Diabetes worrisome?

Diabetes mellitus is a major clinical and public health problem accounting for 4.6 million deaths annually world-wide. According to the International Diabetes Federation, around 366 million people globally are currently estimated to have diabetes, of which 80% live in low and middle income countries. The more worrisome fact is that about 50% of those with diabetes remain undiagnosed.

India’s diabetes burden has more than doubled between 1990 and 2016, with the total number of cases going up from 26 million to 65 million. The death rate due to diabetes increased by 131 per cent, found a study published in Lancet Global Health. The prevalence of diabetes in adults above 20 years increased from 5.5 per cent in 1990 to 7.7 per cent in 2016, the paper found. The disability-adjusted life years (DALY) rate for diabetes increased in India by 39.6 per cent — the highest increase among major non-communicable diseases. 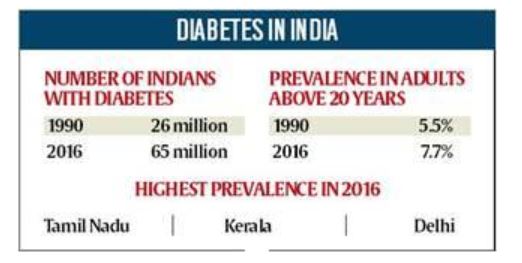 Diabetes is a “high maintenance” disease that leads to severe damage to the heart, kidneys and eyes apart from risk of gangrene if mismanaged. Given the state of the public health system in the country, and the fact that the poor have to pay for healthcare, the findings must be treated as a distress signal on an urgent basis.

Given that people in rural areas and poorer communities in cities are unable to access care earlier, they would be more prone to advanced complications such as renal failure and blindness due to retinopathy. Since 70% of the population lives in rural areas, even a small increase in percentage of people suffering from diabetes adds up to a large number of people who need sustained medical attention but have access to poor health services.

Junk Food & Lack of exercise: For many poorer people in cities, nutritionally well-balanced food may not be within their means. Eating “junk food” is thus not a matter of choice or taste as much as affordability. Higher income levels, less physically demanding occupations and increased availability of mechanised transport and household appliances among urban dwellers to possibly explain the higher incidence of the disease in urban areas.

The pressure of commuting long distances to work and the need to use the public transport system is also not a matter of choice for urban poor. These issues lead to the build-up of stress—another factor that is among the causes of the disease. Asian Indians progress faster through the pre-diabetes stage than those of other ethnic groups. Also, as in other countries where diabetes is spreading rapidly, in India too, recreational physical activity is very low, more so, among women from all sections.

High BMI was the most important risk factor contributing to diabetes in India. Targeting overweight might offer the best results in slowing down the rising trend in diabetes across India. The prevalence of overweight adults aged 20 years or older in India doubled from 1990 to 2016, with an increase observed in every state of India.

Other risk factors include tobacco use, occupational exposure to second-hand smoke, low physical activity and alcohol use.

A major cause of blindness, kidney failure, heart attacks, stroke, and lower limb amputation, it is important to recognise the signs of diabetes early on so that risks related to this disease could be averted.

Unexpected weight loss: In the case of type 2 diabetes, cells do not get enough glucose, which may trigger weight loss.

Constant hunger: Diabetes may keep the sugar from your food from reaching your cells, which might lead to constant hunger.

Blurred vision: Blurred vision occurs when there are rapid changes in your blood sugar levels – from low to high or vice versa – and the eye muscles have not yet adapted to it.  Blurred vision is one of the early warning signs of diabetes.

Fatigue: Fatigue is a symptom often associated with conditions related to blood sugar levels. With diabetes, poor blood sugar control typically results in hyperglycemia or high blood sugar, which can result in fatigue.

Awareness is the first step to any kind of change. More funding for research, better public support for legislation issues. More understanding and empathy. Less blame and shame.

Education is one of the key components in ensuring better treatment and control of diabetes. There is also evidence to show that increasing knowledge regarding diabetes and its complications has significant benefits including increase in compliance to treatment, thereby decreasing the complications associated with diabetes.

Knowing symptoms of type 1 can be life-saving when a diagnosis is right around the corner. If you’re at risk for type 2, education can help prevent or delay the progression of the disease (in cases where you’re able to do that). While it cannot be cured completely, diabetes can be curbed to a large extent with the help of proper medical assistance, diet and regular exercise.

Community involvement: The government, non-governmental organisations (NGOs), the medical community and diabetics will have to join hands to ensure that community involvement is encouraged. Better access to nutritious food and facilities for physical recreational activities, more long-term policy interventions that go beyond packaging and advertising of fast food as well as health care policies along with peaceful life approach would help in containing the spread of diabetes in the country at an alarming rate in the country