TOPPER’S STRATEGY and MOTIVATION: Rahul Sankanur, Rank 17 UPSC CSE 2018 – Inspiring Journey of the Topper from Karnataka, had been to Interview twice, before clearing the exam in his 4th Attempt!!

TOPPER’S STRATEGY/MOTIVATION: Rahul Sankanur, Rank 17 UPSC CSE 2018 – Inspiring Journey of the Topper from Karnataka, had been to Interview twice, before clearing the exam in his 4th Attempt!!

I am Rahul Sankanur. I have secured AIR 17 in UPSC CSE 2018. My optional is Anthropology.

My father S.V.Sankanur is a retired Govt servant and my mother Savita Sankanur is a Home Maker. I hail from Hubli town of Karnataka. Due to the transferrable nature of my father’s job, I did my schooling in Hidkal of Belagavi district , Khanapur town and in Mysuru. Later, I did my Engineering in R.V. College, Bangalore. I also worked for 2 years in an IT company after which I decided to pursue studying for CSE.

Unlike most of the aspirants who have an IAS/IPS officer( or an incident) that inspired them, I had none. Factors such as simplicity of my father, secular and egalitarian outlook of my mother and overall family’s service orientation influenced me to aspire for a life based on public welfare. Also, my stay in Sri Ramakrishna Vidyashala, Mysuru and subsequent study of Swami Vivekananda literature further strengthened the resolve for public service.

Though I wanted to do public service, I wasn’t sure how exactly it is to be done. Various options were available like joining NGO while I work in Private, CSE etc. It was only during my 3rd year of Engineering that I started thinking seriously about CSE. After graduation, the job I got was interesting. But I soon realized that I could not dedicate time to pursue my passion. Therefore I quit my job and started full time preparation for CSE.

What went Wrong in Previous attempt?

Every success story is a story of great failures. I believe I am a good example for it. Let me dwell on the mistakes I did in my CSE journey:

Mistakes in MAINS: I had a lackadaisical approach towards answers writing and always felt I could ‘manage’ it in exams(which I never could). My writing speed was slow and handwriting was really bad(especially towards the end of paper). In Mains,the content and quality of last 4-5 answers in every paper was very bad due to bad time management.

Mistakes in PERSONALITY TEST : I followed the same strategy that I followed for Mains. I would only read current affairs magazines instead of forming my own opinion on various issues.

Though it may sound silly, another problem I faced was that, I was quite hesitant to speak in front of elders. This affected me in answering in front of panel members in Personality Test. I would not express myself openly and would give single sentence answers. This led to average scores in Personality test.

What went Right in this attempt?

In previous attempts, I was in the cycle of going through Prelims-mains-Personality Test and Failure. Therefore, I didn’t get time to improvise on the mistakes I committed. In third attempt when I didn’t get through Mains, I knew I had around 4 months time till next prelims and I had to make best use of it. The following conversation with my college friend was an eye opener.

Friend: Hey Rahul, 2 interviews and 3 mains, yet you aren’t getting into the list. What’s going wrong?

Myself: I have no idea buddy. I think I am doing everything but things are not falling in place.

Friend: okay. Let me ask you something. Tell me what is stupidity ?

Somehow , this statement stuck a chord. All previous attempts, I was following the same approach and was expecting that I succeed , which didn’t happen. As I had decided this would be my last attempt, I though of doing things a bit differently.

I knew my weakness was answer writing (including handwriting). I was confident that I can manage Prelims so I took the risk of allocating only 30-35 days for Prelims.

I joined Insights test series(between Feb and Apr). Though the papers weren’t evaluated, discussion after writing test helped. I had also realised that my optional score in previous attempts were above average . So I did some value addition in time available to get few more marks.

Once Prelims was over, I joined a Test series. Slowly, I started getting good scores which boosted my confidence. Also, I tried to improve my handwriting. On those days when there was no tests, I would write static answers (TLP) from IASBaba website. This exercise enabled me to practice writing and since I wrote few questions, it didn’t consume lot of time.

For optional subject, I spent very less time. I didn’t join test series nor did I do any value addition post prelims. I was confident that with improvement in writing speed, I will get additional 10-20 marks (which I subsequently got).

Once I cleared Mains exam , I again wanted to change strategy for Personality test preparation . I used to spend 75-85 days for Personality test preparation in previous attempts. This time, I travelled to different places (my hobby) and spent more time with my friends. This exercise helped in becoming more composed. Also, as I spent less time in discussions with others aspirants,the ‘INTERVIEW HEAT’ didn’t affect me lot.

CIVIL SERVICES EXAM-UNDERSTAND YOURSELF TO SUCCEED

CSE is not a test of our intellectual ability , but a test of one’s personality. The pressures from outside is immense. To succeed, one ought to be patient and persistent and this can be achieved if one understands oneself. For instance, spending time with friends , listening to music acted as a stress buster for me . So I made it a point to have them in my routine each day.

What I want to convey is that , each one of us has to make our own strategy based on our personality. Something(like studying in night) may work for some but may not work for others.

Some lessons I learnt which I would like to convey:

I would like to thank Pruthvik Shankar(IPS-2017 Batch) who guided me in the course of preparation. His guidance in answer writing helped me get good marks. Also, his energy and humility was and is ever inspiring.

My friends played a great part in securing this rank. Mention should be made of Rajavardhan K, Praveen, Naveen Kumar, Madhu, Prateek and many more who had faith in me when I doubted myself the most.

I would like to end with some Swami Vivekananda’s quotes which guided me in my preparation.

-The greatest sin is to think that your are weak.

-Conquer yourself and the whole universe is yours.

-Arise,Awake and stop not until the goal is achieved. 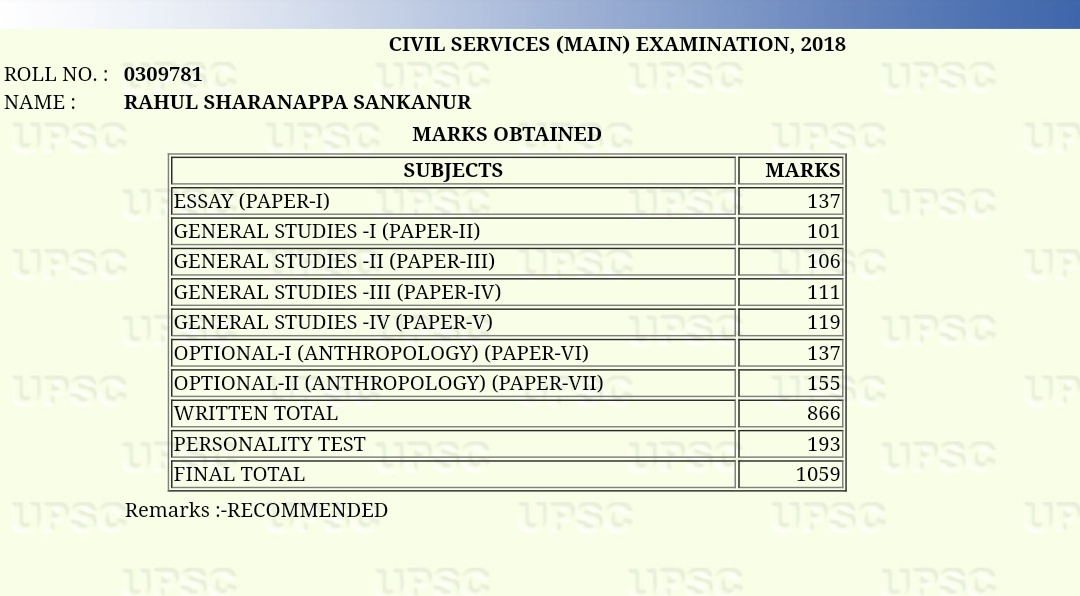 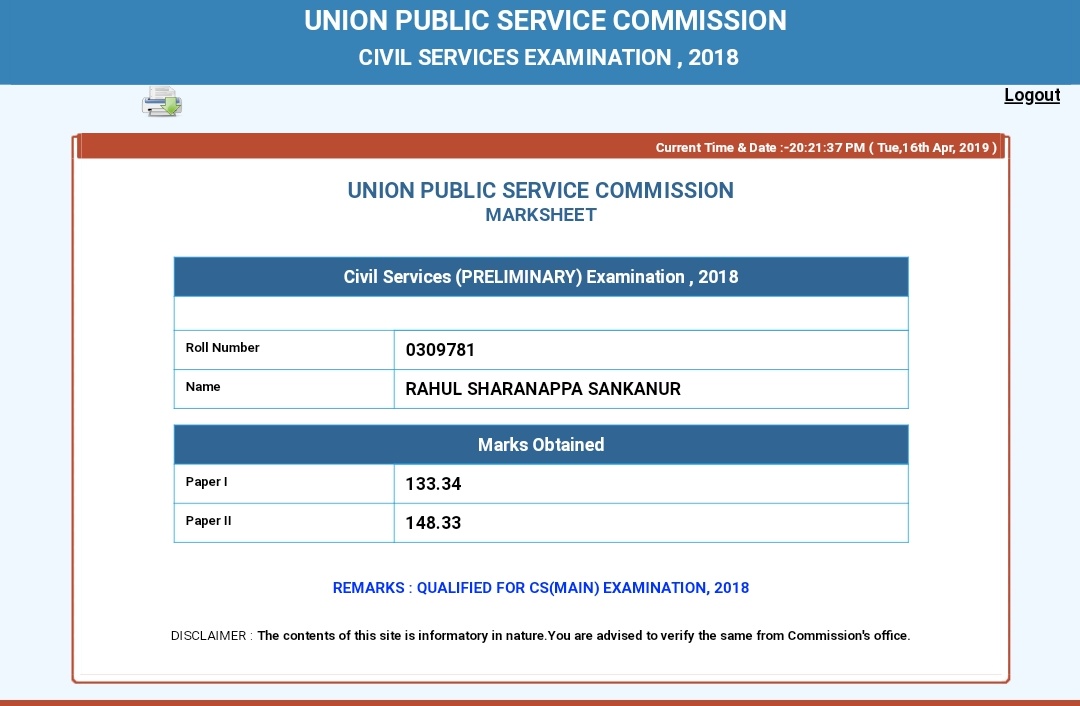