Awareness and Cure for Haemophilia

Haemophilia is a mostly inherited genetic disorder that impairs the body’s ability to make blood clots, a process needed to stop bleeding. This results in people bleeding longer after an injury, easy bruising, and an increased risk of bleeding inside joints or the brain.

Because of the genetics involved in the way the sex of a child is determined, men are more vulnerable to haemophilia than women.

If not diagnosed early, the repeated bleeding into joints, bones muscles may lead to synovitis, arthritis and permanent joint deformities. The bleeding itself can lead to wasting and atrophy of muscles.

The sex of an individual is determined by a pair of “sex chromosomes” (a chromosome is a DNA molecule that contains genetic information).

Females are identified with an XX pair of sex chromosomes, and males with an XY pair.

Haemophilia is caused by a defect in the X chromosome.

It is a rare disorder worldwide — one type, called Haemophilia A, occurs in about 1 in 5,000 births, while Haemophilia B is even rarer at about 1 in about 20,000 births. A vast number of cases, however, are believed to go unreported, particularly in India. According to the World Federation of Haemophilia’s Annual Global Survey 2017, released in October 2018, there were over 1.96 lakh persons living with haemophilia across the world in 2017. In the country-wise data, India emerges with the highest count at nearly 19,000. 80% cases go unregistered, so that the actual count is close to 2 lakh.

India is fast progressing in the field of hemophilia treatment but the core problem is of diagnosis.

Tests for diagnosing Hemophilia are not expensive and can be done at district hospitals. There are two types of tests – Activated Partial Thromboplastin Time (APTT) Test and Prothrombin Time (PT) Test. The PT and APTT screenings are blood tests that show if the blood is clotting properly. Currently the only challenge is about screening which has a huge gap in the rural parts of India. 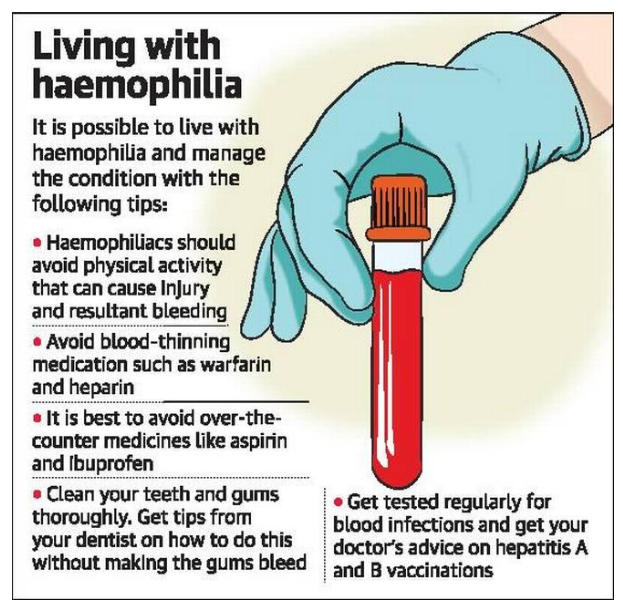 The key to leading a better life with hemophilia is early detection and condition management and the responsibility for that lies with the parents. There is no cure for haemophilia, only management.

Medical management of the condition includes infusing blood clotting factor concentrates into the body to prevent bleeding. This is called prophylactic therapy and is administered on the basis of the patient’s weight. It also entails giving injections to the patient whenever they bleed, also called on demand prophylactic therapy. The efficacy of the medicine, contained in vials, is measured in units. 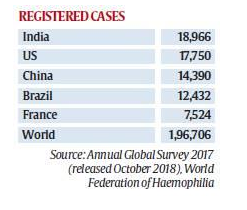 ‘Royal disease’: Britain’s Queen Victoria (1819-1901) is the world’s most widely known carrier of haemophilia. From her, the condition spread among a number of European royal families, which is why haemophilia was once known as the “royal disease”. Victoria passed on a defective X chromosome to three of her children. Her son Prince Leopold died at age 30 as a result of loss of blood after injury. Leopold’s daughter, Princess Alice of Albany, was a carrier whose son inherited haemophilia and died at age 21.

von Willebrand disease (vWD) is another genetic bleeding disorder in which patients are prone to frequent bleeding such as nosebleeds, bleeding gums, and excessive menstrual periods. Unlike hemophilia, vWD affects men and women equally. Like hemophilia, the severity of vWD depends upon the level of the blood protein. The lower the level of protein in the blood, the more severe is the bleeding.