In News: A year ago, economic activity was accelerating in almost all regions of the world. One year later, much has changed.

The above have all contributed to a significantly weakened global expansion, especially in the second half of 2018.

The International Monetary Fund cut its outlook for global growth to the lowest since the financial crisis amid a bleaker outlook in most major advanced economies and signs that higher tariffs are weighing on trade.

IMF scales down India’s growth projection for current fiscal to 7.3% 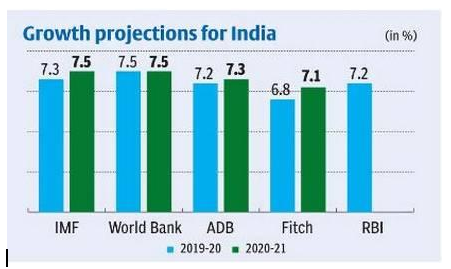 IMF said India’s growth is projected to pick up to 7.5 per cent in FY21, aided by the “continued recovery of investment and robust consumption amid a more expansionary stance of monetary policy and some expected impetus from fiscal policy”.

The Way Forward by IMF

Need for increased Collaboration at a global level: Across all economies, the imperative is to take actions that boost potential output, improve inclusiveness, and strengthen resilience. There is a need for greater multilateral cooperation to resolve trade conflicts, to address climate change and risks from cybersecurity, and to improve the effectiveness of international taxation.