Part of Prelims and mains GS III: Science and Technology 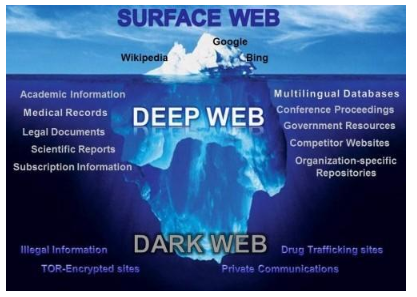 What is Dark Web?

It is considered as an informal grouping among India, Japan, Australia, and the United States. It has been seen as a prospective coalition among the four countries with a political and security perspective in the Indo- Pacific region. The group is currently only a proposal, and has not taken form of an official alliance/organization or any other designated international group.

Regional Comprehensive Economic Partnership (RCEP) is a proposed arrangement between ASEAN and six Asia-Pacific countries including India and Australia. Mainly with the focus on trade and investment.

5G is the next generation of mobile standards being defined by the International Telecommunications Union (ITU) – a specialized agency of the UN for information and communication technologies responsible for allocation of global radio spectrum and development of technical standards.
Along with high data rate, 5G will also reduce latency, save energy, and enable massive device connectivity, paving the way for next-generation applications such as autonomous vehicles, smart homes and cities, and massive machine-to-machine communications for industries.
It is estimated that the total economic impact from 5G in India can exceed $1 trillion by 2035.

India, with the second largest mobile phone subscriber base globally, has also joined the race for 5G.

The delayed adoption of previous generations of mobile networks. The commercial launch of 3G services took place in Japan in 2001, but arrived in India only in December 2008. 4G roll-out in 2012 came three years after the first commercial launch in 2009.

It was set up in 2017 to evaluate and build a roadmap or action plan for 5G deployment in India by 2020. The report laid out three priority areas in 5G:

Telecom technology generations evolve in decade time-frames. It will take foresight and strong execution of a national plan to make India a relevant player in the next evolution of telecom technology.
If India plays this situation right and plays to win, we can not only bring timely and affordable 5G to India, but do it with due consideration to our security concerns and even get an upside from our engagement with the global 5G revolution.

The government in last few years had invested considerable political capital, time and resources in cultivating critical players in the Middle East, namely, Saudi Arabia, United Arab Emirates (UAE), Qatar and Iran in the Persian Gulf region, and Israel in the Levant.
It is time to reap the fruits of political investments and elevate the engagements to a higher level.

While the government has engaged actively in last few years with the Middle Eastern countries, it is now time for action.

Which of the above are among the ‘free-trade partners’ of ASEAN ?

Which of the above are not members of the proposed Quad?

The importance of being neighbourly