India’s first solar cruise vessel to be rolled out soon

Part of Prelims and mains GS III Defence and security

It lays emphasis on incentivisation of transfer of niche technology and higher indigenous content Global Majors, who in collaboration with Indian Partners are ready to make India a Regional / Global manufacturing hub for the platform will also be incentivized.

This will give a major fillip towards encouraging self-reliance and aligning the defence sector with the ‘Make in India ‘ initiative of the Government.

‘Iran made a very big mistake by shooting down U.S. drone’- Trump

Iranian state media said the “spy” drone was brought down over the southern Iranian province of Hormozgan whereas according to a U.S. official the drone had been downed in international air space over the Strait of Hormuz.

Rising tensions in the Gulf 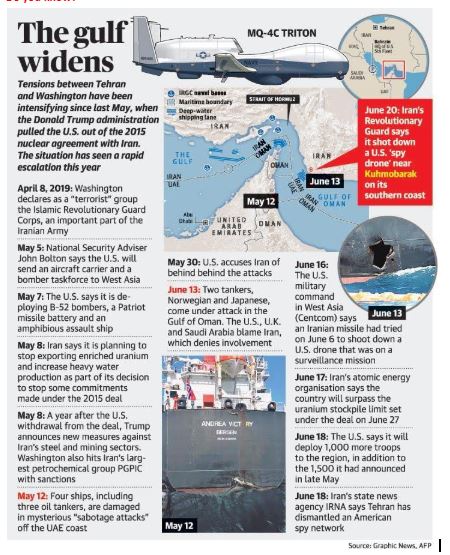 Himalayan glaciers are melting twice as fast since 2000: study

Part of: Prelims and mains GS III Environment and Ecology

Comparing data obtained by Cold War-era spy satellites with images from modern stereo satellites, scientists have shown that Himalayan glaciers have lost more than a quarter of their ice mass since 1975, with melting occurring twice as fast after the turn of the century as average temperatures rose.

WHO writes new prescription to prevent misuse of antibiotics

WHO estimates that more than 50% of antibiotics in many countries are used inappropriately for treatment of viruses, when they only treat bacterial infections, or are the wrong choice of antibiotic (broader spectrum), thus contributing to the spread of antimicrobial resistance.

At the meeting of the Governing Council of the NITI Aayog last week, Prime Minister Narendra Modi announced the target of a $5 trillion economy for India by 2024. What we would hope to find once we have reached our destination is the question.
A quantum leap in the size of the economy cannot be achieved easily. It will require design, funding and governance. In this path the pursuit should be to create a valuable economy.

Characteristics of a valuable economy:

Any improvement in the life of the majority would require a re-alignment of the growth process so that it is less damaging. This would very likely require that we have slower growth but the process can be configured to channel more of it towards poorer groups.
We may end up in a situation of less tangible goods in the aggregate than otherwise but one in which more people are happier than in the past. Such an economy is more valuable.

As over 170 countries around the world celebrate the fifth International Yoga Day on June 21.
Recognising that “yoga provides a holistic approach to health and well-being” and also that wider dissemination of information about the benefits of practising yoga would be beneficial for the health of people all over the world, the UN proclaimed June 21 as the International Day of Yoga via Resolution 69/131.
Quite appropriately, the theme of the 2019 International Yoga Day is “Climate Action”.
Establishment of the first India-China Yoga College at the Yunnan Minzu University in Kunming in China and the India-Turkmenistan Centre for Yoga and Traditional Medicine in Ashgabat, Turkmenistan are a few of the important first steps in the efforts to spread the benefits of yoga.

Practised in various forms around the world and continuing to grow in popularity, yoga is essentially an ancient physical, mental and spiritual practice that originated in India possibly around the 5th century BC.
The word yoga comes from Sanskrit and means “to join” or “unite”. The science of yoga joins different facets of human existence.
The word was first mentioned in the Rigveda , but its philosophy, science and grammar were first provided by Patanjali in his magnum opus, Patanjali Yoga Sutra .

Much more than a workout:

It is a comprehensive approach to achieve wellness. It recognises the vital connection between the body and the mind. It aims for balance and equanimity, peace, poise and grace. It is a sublime expression of the quest for excellence, for synthesis and harmony.

We are living in times of great challenges, of unprecedented change in unpredictable directions. The way we live, learn, work and enjoy is changing rapidly. Lifestyles are getting transformed through technology.
However, as the global community started drafting its development agenda in 2015, it realised that we have been missing a big component of “development”. There was a need for balance.

And that “balance” in all spheres starting with physical well-being is what yoga is all about. Yoga is an approach to life that focuses on physical balance, mental equilibrium and working towards a harmonious synthesis of diverse elements including the protection of the environment.

Yoga is something beyond physical health and material wealth. The human persona is not only a body; it is also a mind, an intellect, and a soul. Yoga attempts to harmonise all of them.
Yoga means to join. Its ultimate goal is to experience the unity of individual and universal consciousness. Yoga teaches us to recognise the fundamental unity between human beings and humankind, humans and the environment, and ultimately recognise a total interconnectedness of everything. The essence of this realisation is to experience that all is one. There is no ‘us’ and ‘they’ — everything is us. This is an integral or holistic approach.

Apart from emphasising the normal benefits of yoga, International Yoga Day should be utilised to think about how a peaceful transition can be achieved for peace, harmony and happiness.

Q.2) Consider the following statements about Strait of Homruz

Q.3) Consider the following statements about Strait of Homruz

Is India overestimating its economic growth?