In News: In line with its election promise of Rs 100 trillion investment in the infrastructure sector by 2024, the NDA government would be targeting low-hanging fruits, such as Metro projects, inland waterways, natural gas grids and airport privatisation, to give a fillip to private sector investment in the first few months of its tenure. Getting private sector back in a big way would be the topmost priority since the government has limited fiscal headroom.

Fitch said in its report that reducing general government debt to 60 per cent of the GDP ceiling by FY25, from the rating agency’s 68.8 per cent of the GDP in FY19 would require a significant deficit reduction of about 0.5 per cent of GDP annually. The government’s own budgetary support would, therefore, be largely limited to creating infrastructure support for agriculture, IT in education and digital networks for its social outreach programmes.

Transport infrastructure in India has grown at an unprecedented rate during nearly the last five years. We can, in fact, claim that this has been a period of “highest evers” and “never befores” for the sector. At the highest ever pace of construction, we have built more than 35,000 km of national highways in four and a half years. The country had never before seen world-class expressways such as the Eastern Peripheral Expressway and Western Peripheral Expressway or engineering marvels such as the Dhola Sadiya Bridge and Chenani Nashri Tunnel.

The Bharatmala Pariyojana is unique and unprecedented in terms of its size and design, as is the idea of developing ports as engines of growth under Sagarmala (help connect places of production with markets more efficiently, help reduce logistics costs, create jobs and promote regionally balanced socioeconomic growth in the country). The development of 111 waterways for transport, with multinational companies already carrying their cargo over the Ganga, is also a first ever, as are FASTags, the promotion of alternative fuels such as ethanol, methanol, biofuels, and electricity, as well as innovative modes of travel such as seaplanes and aeroboats.

The figures gleaned from official data, underline an infrastructure emergency, which is not getting addressed fast enough. Our Rail tracks, airports and roads are choked beyond capacity and there’s little relief in sight.

The high rate of accidents continues to be a matter of grave concern. There is a need to prevent the colossal loss of lives in road accidents, and give priority to rectifying accident black spots through engineering means, employing road safety features at the design stage for highways, conducting road safety audits, setting up driver training and post-trauma care centres as well as generating awareness.

Innovative solutions like seaplanes, ropeways, aeroboats and double-decker buses need to be actively explored for adoption. These will bring down the traffic pressure and congestion on roads.

Seaplanes have already been tested, and trials are soon to be conducted on aeroboats. A memorandum of understanding (MoU) has been signed with Austrian ropeway company Doppelmayr for building ropeways through congested cities and hilly areas, and another MoU has been signed with Transport for London to help us overhaul our urban transport.

To reduce pollution, it is required to promote alternative fuels like ethanol, methanol, biofuels and electricity. The concept of ‘waste to wealth’ should be employed for generating alternative fuels. Priority to also be given to greening the roads, and FASTag-based electronic toll collection, which will prevent congestion at toll plazas and bring down pollution.

Private sector participation in infrastructure delivery helps deliver tangible benefits, and there is anecdotal evidence to support this, even as the fiscal space remains constrained. In highways, airports, ports and renewables, the private sector’s role has been landscape altering. The private sector has also delivered efficiently—both on project execution (where land and clearances have not been a constraint) as well as operations.

Besides, private participation enhances public accountability. As consumers, we rarely hold public utilities to account for non-performance, and resort to coping solutions. Yet, when a public private partnership (PPP) contract is awarded, we tend to demand better services right away. When done right, PPPs bring back trust in public utilities that execute them, improve service delivery, bridge resource gaps, and help wean away dependence on unsustainable coping solutions which the poor can ill afford. 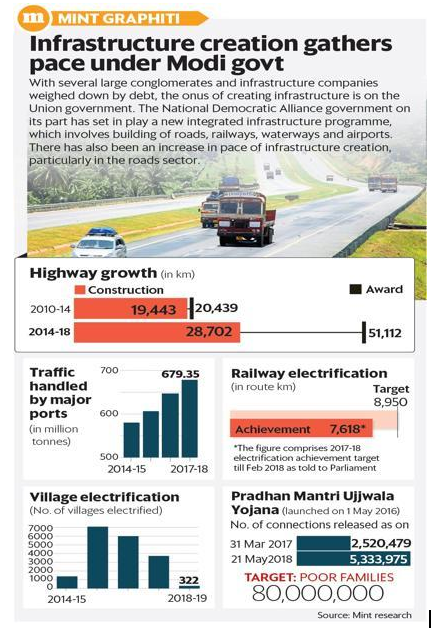 Given the need for resources to boost its ambitious infrastructure programme, the government is also exploring an independent financial institution to cater exclusively to the roads and highways sector. The roads ministry also introduced an asset monetization model in India, referred to as the toll operate transfer (ToT), which is now expected to provide a template for other infrastructure sectors.