NLFT has been banned under the Unlawful Activities (Prevention) Act since 1997 and has been involved in violence, operating from their camps across the international border. NLFT has been responsible for violent activities including 317 insurgency incidents in which 28 security forces and 62 civilians lost their lives during the period 2005-2015. Peace talks with NLFT were initiated in 2015 and there has been no violence by NLFT since 2016.

NLFT (SD) has agreed to abjure the path of violence, join the mainstream and abide by the Constitution of India. It has agreed to the surrender of its 88 cadres with their weapons. The surrendered cadres will be given surrender benefits as per the Surrender-cum-Rehabilitation Scheme, 2018 of the Ministry of Home Affairs. The State Government of Tripura will help the surrendered cadres in housing, recruitment, education etc. Government of India will consider the proposals of Tripura State Government regarding economic development of tribal areas of Tripura.

Aim: To protect the rights of consumers by establishing authorities for timely and effective administration and settlement of consumers’ dispute

The Bill will replace the more than three decades old Consumer Protection Act, 1986, and will provide a better mechanism to dispose consumer complaints in a speedy manner and will help in disposal of large number of pending cases in consumer courts across the nation.

Licence to practice: Section 32 of the NMC Act 2019 allows the proposed NMC, which will replace the Medical Council of India, to grant “limited licence to practice medicine at mid-level as a community health provider”. The Indian Medical Association (IMA) sees it as encouraging quackery. In a letter to Prime Minister Narendra Modi on July 30 calling for the Bill to be redrafted, the IMA wrote: “We are deeply concerned about granting non-medical ‘persons connected with modern scientific medical profession’, licence to practise modern medicine… This is nothing but legalising and promoting quackery in India… Who will guarantee that these ‘legalised quacks’ will work in villages only?… National Medical Commission Bill will open the floodgates for licencing 3.5 lakhs ‘legalised quacks’. This amounts to ‘licence to kill’.”

Bridge course: Doctors have expressed concerns about the licence mentioned in Section 32 being another name for a contentious “bridge course”. Such a course has been proposed in the original version of the Bill. It would have allowed practitioners of homoeopathy and Indian systems of medicine to go on to practice allopathy. In the new Bill, the bridge course has been dropped as per the recommendations of the Parliamentary Standing Committee on Health and Family Welfare, which wrote: “The Committee is of the view that the bridge course should not be made a mandatory provision in the present Bill. However, the Committee appreciates the need to build the capacity of the existing human resources in the healthcare sector, to address the shortage of healthcare professionals so as to achieve the objectives of the National Health Policy, 2017. The Committee, therefore, recommends that the State Governments may implement measures to enhance the capacity of the existing healthcare professionals including AYUSH practitioners, BSc (Nursing), BDS, B Pharma etc. to address their State specific primary healthcare issues in the rural areas.”

The original Bill had proposed a licentiate examination for doctors, and the IMA had expressed concerns about it then too. The new Bill proposes a single exit exam – the final MBBS exam, which will work as a licentiate examination, a screening test for foreign medical graduates, and an entrance test for admission in postgraduate programmes. It also provides for just one medical entrance test across the country

In the letter, IMA wrote: “The Bill condenses final year MBBS exam, Licentiate exam. and PG NEET into one examination. This effectively removes the opportunity to reappear for PG selection. Moreover, the examination being objective in nature, increases the workload and stress level of the students manifold. Allowing foreign medical graduates to take the same examination will be an injustice… The current system allows medical graduates to practise irrespective of the status of his/her PG NEET.”

Changes in the CSR Act

The main recommendations include –

MoU between India and Tunisia on Cooperation in the Exploration and Use of Outer Space for Peaceful Purposes:

UNIDO and National Institute of Solar Energy to partner for skill development program: The agreement is part of the ongoing MNRE-GEF-UNIDO project implemented jointly by UNIDO and to support capacity building and skill development of technical manpower in the Concentrated Solar Thermal Energy Technologies (CST) which are being used to replace conventional fossil fuels e.g. coal, diesel, furnace oil etc. and save costs and emissions in the industrial process heat applications.

GI is an indication used on products that have a specific geographical origin and possess qualities or a reputation that are due to that origin. Such a name conveys an assurance of quality and distinctiveness which is essentially attributable to its origin in that defined geographical locality.

GI products can benefit the rural economy in remote areas, by supplementing the incomes of artisans, farmers, weavers and craftsmen. India’s rural artisans possess unique skills and knowledge of traditional practices and methods, passed down from generation to generation, which need to be protected and promoted.The Department for Promotion of Industry and Internal Trade has taken several initiatives in this regard and is actively involved in promotion and marketing of GIs.

Expansion of Rotavirus vaccine to the entire country: Government is committed to ending morbidity and mortality in children due to diarrhoea by 2022. Strengthening routine immunization is an essential investment in India’s children and will ensure a healthy future of the country.

Why: In India, every year 37 out of every 1000 children born are unable to celebrate their 5th birthday, and one of the major reasons for this is diarrheal deaths. Out of all the causes of diarrhoea, rotavirus is a leading cause of diarrhoea in children less than 5 years of age. It is estimated that rotavirus cause 8,72,000 hospitalizations; 32,70,000 outpatient visits and estimated 78,000 deaths annually in India.

Swachh Survekshan 2020 – To be conducted in Jan 2020; the fifth edition of the annual cleanliness survey conducted by the Ministry of Housing and Urban Affairs (MoHUA) 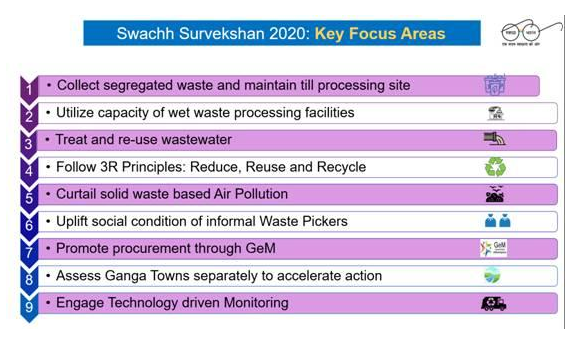 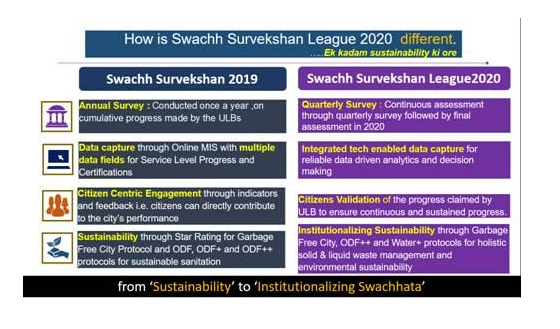 National Policy on Biofuels: Envisages production of biofuel from UCO

Stubble Burning: There has been a considerable reduction in crop residue burning incidents in 2018.

Samagra Shiksha-Jal Suraksha Drive: It is a time bound campaign with a mission mode approach. This concept of water conservation is essential for students so that they can understand the importance of water and how it is shaping their lives meaningfully, thereby enabling them to participate in water conservation activities in their day to day lives.

In July 1942, the Congress Working Committee met at Wardha and a resolution was passed which was termed The Wardha Resolution. It is also known as Quit India Resolution which demanded, “The British Rule in India must end immediately.” And it declared that free India “will assure the success by throwing his great resources in the struggle for freedom and against the aggression of Nazism, Facism and perialism”. Thus, Quit India was about enabling India’s greater participation in the war for peace and in the war of liberation from fascism and nascism. Quit India was a civil disobedience movement launched at the Bombay session of the All India Congress Committee (AICC) by Mahatma Gandhi on August 8, 1942, demanding an end to British rule in India. While message of quit India was loud and clear, the call of ‘do or die’ infused the masses with a life of its own.

Factors that led to attitude change of Mahatma Gandhi from non-compromising peaceful Gandhi to aggressive Gandhi:

All the above factors slowly one after another turned Gandhian and fellow citizens impatient, also millions perished during the Bengal famine, these things enraged Gandhi and he finally gave a call for direct confrontation with a call for “Do or Die”.

Circumstances for the launch of the movement:

Impact of the movement:

What role did students play in India’s freedom struggle?

How did Gandhi’s arrival change the discourse of the nationalist movement?

Change in discourse of national movement:

National movement was inclusive and representative:

Some of the flaws in Gandhi’s ideology:

Gandhi’ arrival was watershed in the national movement; it changed the discourse in significant way. It can be holistically said national movement was inclusive and representative as it covered whole India and its people.