In news: Global oil prices surged the most on record after a strike on a Saudi Arabian oil facility removed about 5% of global supplies, an attack the US has blamed on Iran.

For oil markets, it’s the single worst sudden disruption ever, surpassing the loss of Kuwaiti and Iraqi petroleum supply in August 1990, when Saddam Hussein invaded his neighbor. It also exceeds the loss of Iranian oil output in 1979 during the Islamic Revolution, according to the International Energy Agency.

The vulnerability of Saudi infrastructure to attacks, historically seen as a stable source of crude to the market, is a new paradigm the market will need to deal with. Saudi Arabia is the world’s biggest oil exporter and, with its comparatively large spare capacity, has been the supplier of last resort for decades.

Saudi Arabia can restart a significant volume of the halted oil production within days, but needs weeks to restore full output capacity. The kingdom — or its customers — may use stockpiles to keep oil supplies flowing in the short term.

“No matter whether it takes Saudi Arabia five days or a lot longer to get oil back into production, there is but one rational takeaway from this weekend’s drone attacks on the Kingdom’s infrastructure — that infrastructure is highly vulnerable to attack, and the market has been persistently mis-pricing oil,” Citigroup Inc.’s Ed Morse wrote in a research note.

The surge in oil prices comes at a time when the Narendra Modi government is trying to boost the economy after GDP growth slumped to the slowest in more than six years. An increase in inflation stoked by higher fuel prices will also leave less space for RBI to cut interest rates to combat the slowdown. 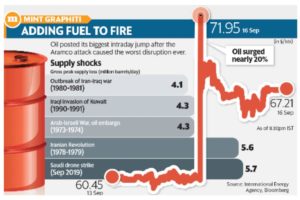 a. Since India imports a large quantity of oil from Saudi Arabia, a spike in the rates could derail India’s path to economic recovery amid growth slowdown.

b. Volatility in global crude oil prices during a period of weak demand could further weaken investor sentiments.

d. A spike in crude oil price could also make chemicals used in production of plastics, tyres, paints and a host of other items costlier.

e. While refiners are expected to benefit from inventory gains in the short term due to higher crude prices, a sustained rise would lead to an increase in the working capital borrowings and interest expense of refining firms.

World’s most important oil choke point: The Strait of Hormuz