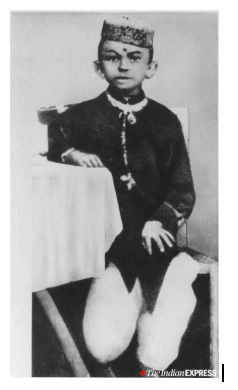 Opinions and views about his person and his non-violent technique of struggle remain deeply divided. For some, he was a puritanical, conservative critique of modernity. For them he created and perpetuated unrealistic and confused ideas about economic development and technological progress.

For his admirers, Gandhi was a man of spiritual truthfulness and democratic action, both at the public and personal levels, with a unique method of struggle that combined political pragmatism with ethical integrity. Some among these admirers evaluate Gandhi’s impact on human history as being as significant as that of Jesus, Buddha and Karl Marx.

Quest for spiritual cause – Satya

In Gandhi’s autobiography, The Story of My Experiments with Truth, one can find the idea that life is nothing but a spiritual experience with truth, and a struggle against all forms of untruth and injustice.

As such, Gandhi claimed that his life was his message, simply because he extended his practice of satyagraha to all walks of life. Gandhi, in short, was a leader looking for a spiritual cause. He found it, of course, in his non-violence and, ultimately, in independence for India. Truth, Satya, was the central axis of the Gandhian system of thought and practice.

Outcome hinges exactly on the truth of her testimony versus his defence. Only one can be true.

Home and the world

Of late, many musicians in south India have faced vicious attacks from rightwing Hindutva groups for singing hymns and psalms, thereby allegedly hijacking “Hindu” Carnatic music for “Christian” evangelical aims.This despite the fact that the violin, central to the Carnatic system in modern times, is a European gift to Indian music.

Both Christian and Muslim religious lyrics and poetry have been a constitutive part of the Carnatic repertoire throughout the 20th century. Gandhi made great use of the Bible in his prayers, teachings, writings and Ashram liturgies. He was often accused of being a crypto-Christian.

However, he flatly refused to give preference to the Vedas over the Bible. He is no Sanatani Hindu who is narrow, bigoted and considers evil to be good if it has the sanction of antiquity and is to be found supported in any Sanskrit book.

Just before the Kristallnacht (an incident known as “Kristallnacht”, Nazis in Germany torched synagogues, vandalized Jewish homes, schools and businesses and killed close to 100 Jews), Gandhi advised European Jews to relocate to Palestine and make it their homeland only with the cooperation and goodwill of native Arabs, and not otherwise. This appalled even sympathetic Jews like Buber and Magnes, who had admired and supported Gandhi at the time of the Salt March in 1930, before the Nazi takeover of Germany.

Gandhi a political thinker and a social reformer

There is more to Gandhi which makes him a political thinker and a relevant social reformer. Gandhi was a dialogical thinker who was open to other horizons of thinking. He firmly believed that the spirit of genuine reciprocity and solidarity is not just a moral requirement, but also a geopolitical necessity.

There are ample events and incidents insisting that we can continue to consult Gandhi on all manner of issues that may trouble our individual or collective conscience. Truth is the key to Gandhi’s philosophy, and we rely on Gandhi even decades after his death and long after his supposed lapse into political irrelevance.

Gandhi was a man of experimentation, a man who insisted on the quest for truth. Therefore, it should not come to us as a surprise that the literal meaning of satyagraha is “asserting for truth”.

Albert Einstein’s famous words on Gandhi: “Generations to come will scarce believe that such a one as this ever in flesh and blood walked upon this earth.”

Gandhi’s favourite hymn: “Vaishnava Jana To,” which says that a true human is one, who feels the pain of others, removes misery and is never arrogant.

In 1925, Gandhi wrote in “Young India”: “It is impossible for one to be internationalist without being a nationalist. Internationalism is possible only when nationalism becomes a fact, i.e., when peoples belonging to different countries have organized themselves and are able to act as one man.” He envisioned Indian nationalism as one that was never narrow or exclusive but one that worked for the service of humanity.

Do or Die Speech by Gandhiji: In 1942, Mahatma Gandhi gave the clarion call of ‘Do or Die’ from Gowalia Tank Maidan to end the British rule and launched the Quit India Movement.

Who gave the title of ‘Mahatma’ to the ‘Father of the Nation’: Gurudev – Rabindranath Tagore

Majoor Mahajan Sangh: Gandhi formed the Majoor Mahajan Sangh, an association for workers’ rights. During those days, “Mahajan” was used as a title of respect for elites. Gandhi inverted the social structure by attaching the name “Mahajan” to “Majoor,” or laborers. With that linguistic choice, Gandhi enhanced the pride of workers.

Dyerism: In 1919, the Rowlatt Act enacted by the British government took away the civil rights of Indians. Those who protested peacefully in Jallianwala Bagh faced merciless police firing on the orders of General R Dyer. That cold-blooded assault was described by Mahatma Gandhi as Dyerism. He employed the concept to denote practices of exclusion, including the ostracisation of the Dalits from all spheres of social life in 1919.

Pietermaritzburg: A railway station in South Africa where a young Mahatma Gandhi was thrown out of a “Whites-only” compartment 125 years ago

Gandhi called it “the prince among the political sections of the IPC designed to suppress the liberty of the citizen”: Section 124A of the IPC

Dakshina Bharat Hindi Prachar Sabha: To improve Hindi literacy among the non-Hindi speaking people of South Indi and is headquartered in Chennai.

The Story of Indian Flag

Jallianwala Bagh Massacre: Gandhi launched a nationwide protest against the Rowlatt Acts with the strongest level of protest in the Punjab.

Gandhi applied his experiments with truth and practice of non-violence, not only at an individual level but also in the process of the global affairs. In Gandhi’s model of national and international politics, truth (satya) and non-violence (ahimsa) were brought into a mutually interacting and reinforcing relation. Therefore, as in the case of means and ends, truth and non-violence were, for Gandhi, interchangeable entities beyond cultural borders and mental ghettos.

By Gandhi in India

There were two main systems of indigo cultivation – nij and ryoti. 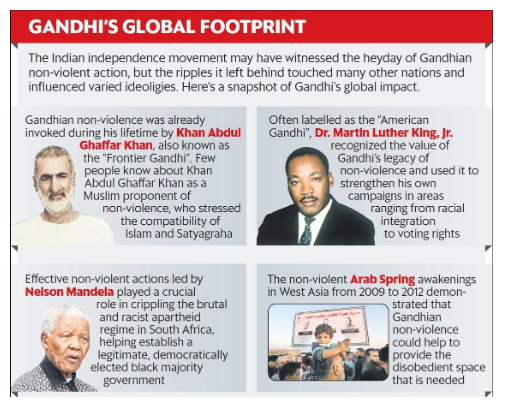 In 2018-July, Government decided to grant Special Remission to Prisoners on the upcoming occasion of 150th Birth Anniversary of Mahatma Gandhi.

HIGHLIGHTS OF THE NEWS

Pardon: It removes both the sentence and the conviction and completely absolves the convict from all sentences, punishments and disqualifications.

Respite: It denotes awarding a lesser sentence in place of one originally awarded due to some special fact, such as the physical disability of a convict or the pregnancy of a woman offender.

Reprieve: It implies a stay of the execution of a sentence (especially that of death) for a temporary period. Its purpose is to enable the convict to have time to seek pardon or commutation from the President.

A. With reference to the British colonial rule in India, consider the following statements:

Explanation: Lord Chelmsford, the then Viceroy of India, invited Gandhi to Delhi at a War Conference. In order to gain the trust of the empire, Gandhi agreed to move people to enlist in the army for World War I.

Hence Statement 2 is wrong. Statement 1 and 3 are correct.

C. In 1932, Mahatma Gandhi began a fast unto death in Yerwada Jail against:

E. Gandhiji relinquished his title ‘Kaiser-e-hind’ bestowed on him by the British for his services during the Boer War in South Africa.

F. Mahatma Gandhi undertook fast unto death in 1932, mainly because:

Explanation: Gandhi took fast unto death on the announcement of communal award and Poona pact was signed after that with agreement of Gandhiji and Ambedkar

H. Reason for Mahatma Gandhi to organize a satyagraha on behalf of the peasants of Kheda?