In Chemistry has been awarded to John B. Goodenough, M. Stanley Whittingham and Akira Yoshino for the development of lithium-ion batteries

In Physiology or Medicine has been awarded to William G. Kaelin Jr, Sir Peter J. Ratcliffe and Gregg L. Semenza “for their discoveries of how cells sense and adapt to oxygen availability”

In Physics has been awarded to Canadian-American cosmologist James Peebles and Swiss scientists Michel Mayor and Didier Queloz for revealing the wonder of the evolution of the universe and discovering planets orbiting distant suns. 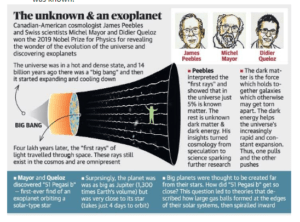 For Peace has been awarded to Ethiopian Prime Minister Abiy Ahmed Ali for his efforts to achieve peace and international cooperation, and in particular for his decisive initiative to resolve the border conflict with neighbouring Eritrea.

In Literature, has been awarded to Peter Handke “for an influential work that with linguistic ingenuity has explored the periphery and the specificity of human experience.”

The Nobel Prize in Chemistry is awarded by the Royal Swedish Academy of Sciences and is one of the five Nobel Prizes that were established by the will of Alfred Nobel, a businessman, chemist, engineer, inventor, and philanthropist.