For millions of Sikhs worldwide, the inauguration of the Kartarpur corridor was a dream seven decades in the making. Ever since India and Pakistan were partitioned with an arbitrary line drawn through Punjab, the placement of Kartarpur, where Guru Nanak spent his last years, meant that while a majority of his devotees were left on one side of the border, his last resting place was left just four kilometres on the other side.

Unlike the other major Sikh shrine at Guru Nanak’s birthplace Nankana Sahib, Kartarpur Sahib was off Pakistan’s highways and therefore fell into disuse. Those keen to see it were restricted to peering through binoculars at a border checkpost. The inauguration of the renovated shrine in Kartarpur by Prime Minister Imran Khan, and the access to the corridor from Sultanpur Lodhi on the Indian side by Prime Minister Narendra Modi, saw the fervent hopes of all those people being granted, timed with the 550th birth anniversary of Guru Nanak.

The Shrine – Gurdwara in Kartarpur

The gurdwara in Kartarpur is located on the bank of river Ravi in Pakistan. It is about four km from the Dera Baba Nanak shrine, and about 120 km northeast of Lahore. It was here that Guru Nanak assembled a Sikh community and lived for 18 years until his death in 1539

The shrine is visible from the Indian side, as Pakistani authorities generally trim the elephant grass that would otherwise obstruct the view. Indian Sikhs would gather in large numbers for darshan from the Indian side, and binoculars were installed at Gurdwara Dera Baba Nanak. The gurdwara was opened to pilgrims after repairs and restoration in 1999, and Sikh jathas have been visiting the shrine regularly ever since. Sikh jathas from India travel to Pakistan on four occasions every year- for Baishakhi, the martyrdom day of Guru Arjan Dev, the death anniversary of Maharaja Ranjit Singh, and the birthday of Guru Nanak Dev.

It is hoped that the corridor would pave the way for peace and greater progress of all people. The corridor will drastically cut down the journey pilgrims have to make from more than 200 km to just 6 km. 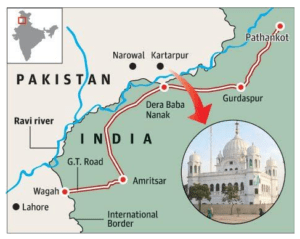 It has, in a very limited way, formally resumed people-to-people contact between the two countries. This is incredible because both countries were till recently on the brink of a full-fledged war; tensions continue to be high. As a result, cross-border contacts between both sides have been abandoned; in fact, India’s ambassador to Pakistan was asked to leave by the host country when tensions had peaked.

However, neither side has been able to build on the goodwill for the project in both countries to create an atmosphere for talks on other issues. This failure was most evident when both Mr. Modi and Mr. Khan carried out separate inauguration ceremonies, but failed to come together at the border for the launch of the project, though both leaders likened it to the “coming down of the Berlin wall”.

Delhi should recognise that the footprint of Punjab and its people goes beyond India and Pakistan — it has significant influence in many parts of the world. Prime Minister Narendra Modi could add a new layer to his diaspora diplomacy if he promotes the celebration of ‘Punjabiyat’. That might help transcend the Kartarpur exception, facilitate the long-overdue collective reflection on what binds us together in the Subcontinent and how we might overcome our current divisions. For that promise to be realised, leaders will need to walk the extra mile, both literally and figuratively.