Importance of ICT for effective governance

India needs to prepare for the next wave of digital governance

Several initiatives are being taken by the government to enhance existing governance mechanisms by leveraging advancements in technology.

Such efforts and initiatives are bound to intensify, given the growing challenges in governance and availability of technology in the country.

The need is now to converge such efforts and align them with a futuristic governance framework, a framework that has a ‘human-need centric design’. 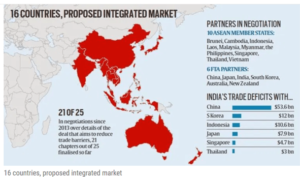 “All RCEP Participating Countries will work together to resolve these outstanding issues in a mutually satisfactory way. India’s final decision will depend on satisfactory resolution of these issues,” the joint statement by RCEP members said.

Q.4) Which of the following countries are members of Shanghai Cooperation Organisation

Q.5) Which of the following are considered as the reasons for automobile slowdown observed in early 2019

A rights-based framework to theorise poverty

Fusing traditional medicine with the modern

Kerala’s modernity and its discontents

As Delhi chokes on its air, the lessons Gabon, a West African country offers