The Prohibition of Electronic Cigarettes Ordinance, 2019

In News: In recent times, the use of e-cigarettes has become a popular alternative to cigarettes. The difference between the two is that e-cigarettes do not contain tobacco and therefore are not regulated under the Cigarettes and Other Tobacco Products Act, 2003. Rising concerns on the health risks posed by e-cigarettes have led to the promulgation of an Ordinance banning their production, export, advertisement, and storage in India. 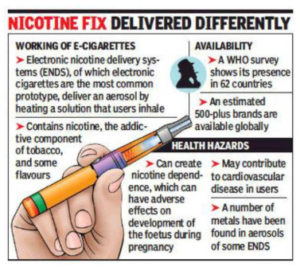 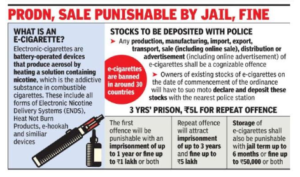 …the decision has been taken to prohibit/ban e-cigarettes including all forms of Electronic Nicotine Delivery Systems [ENDS), Heat Not Burn Products, e-Hookah and the like devices.