In News: A recent report by a public health group on pharmaceutical marketing practices has revealed widespread use of bribes and inducement by Pharma companies to the doctors in order to increase the sale of their products.

Indian pharmaceutical companies received a third of the warnings the United States Food and Drug Administration (FDA) issued for misbranding, selling unapproved medicines and violating Current Good Management Practices (CGMP) so far this year. According to section 501(a)(2)(B) of the Federal Food, Drug, and Cosmetic Act (FD&C Act) violations of CGMP by a drug manufacturer can result in its product being categorised as adulterated. Management oversight, non-conformity to standards, batch failures, contamination are some of the constituents of CGMP violations.

An unhealthy alliance between doctors and pharma firms

For doctors the Medical Council of India has a code of ethics which bars them from accepting any gifts, cash, travel facilities or hospitality from Pharma companies. However for the pharmaceutical companies there is a voluntary code known as Uniform Code of Pharmaceutical marketing practices or UCPMP which experts says is a not a very effective mechanism to check the prevailing malpractices.

What’s alarming is that there is no law to punish those guilty of the unethical practice; and the government refuses to blink. Result: patients are forced to buy costly medicines.

In 2015, the government had notified the Uniform Code for Pharmaceutical Marketing Practices (UCPMP), crucial for an industry that until now had nothing to regulate it—neither a law nor any guidelines.

The Union government still sits on a 2015 proposal to enforce a uniform marketing practices code for pharma companies, entailing stringent penalties. A year and a half ago, a draft of regulatory codes which was sent to Law Ministry to reign in unethical practices under Essential Commodities Act was rejected. Yet, the Ministry of Health in a reply to a Right of Information (RTI) report said that the draft was being discussed 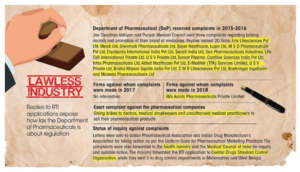 The health threat is posed to millions of unsuspecting people, who fall prey to irrational prescriptions pushing drugs that may be hazardous for health.

Rising use of antibiotics is the main cause of antimicrobial resistance, one of the world’s greatest health threats. Bacteria evolve resistance to drugs naturally over time, becoming superbugs, but mass or inappropriate use dramatically speeds up this process.

Health care isn’t just another consumer product. It is more than that. The Hippocratic ideals of putting patients first are ingrained in our culture and reflected in the regulation of medical licenses and malpractice law. But although Hippocratic ideals have long been the basis of expectations for medical professionals, they haven’t yet been formally applied to health care companies. This is a major shortcoming in an era when the actions of large health systems, pharmaceutical companies, device companies, and insurance companies can have even greater effects on patients than the actions of individual clinicians.

You get a felling that allowing this technology will create a controversy. A section in the society feels that it would be immoral to interfere with God’s creation. Moreover, such decision would also leave the poor and marginalised sections deprived of the fruits of the new technology as it is highly expensive. On the other hand, the scientific community backing this technology believes that such a ground breaking success should not be wasted on moral or ethical grounds. It has always been in the nature of human beings to innovate and invent, thereby, improving the quality of life. Gene editing would be immensely beneficial for humanity as it would open endless possibilities for improving human life and alleviate their sufferings.

What decision would you take in this regard? Substantiate your view point with suitable reasoning. (250 Words) (20) (Refer Solution)