Prime Minister Narendra Modi laid the first brick of the grand Ram Temple in Ayodhya at 12:44pm, as per the ‘muhurat’ for ‘bhoomi pujan’. He termed August 5 a ‘golden day’ and added that Ram Janmabhoomi stands ‘liberated’ today. CM Yogi Adityanath said that the temple construction is a moment to “showcase new India to the world, which does not discriminate on basis of caste and creed”.

History and Significance of the Ram Temple

1858: Puja on premises – An FIR was filed on November 30 by Mohd Salim against a group of Nihang Sikhs who had conducted rituals inside the Babri Masjid. The dispute and riots led to the British building a seven-foot-high wall to separate the places of worships for Hindus and Muslims.

1885: Case for temple – Raghubar Das, who identified himself as mahant at the chabutra in the outer courtyard, filed a suit in the Faizabad civil court against the Secretary of State for India in Council seeking permission to build a makeshift temple there. The suit was dismissed. Subsequent civil appeals too were dismissed by the District Judge of Faizabad and the court of the Judicial Commissioner. A riot in 1934 led to demolition of a portion of the structure, which the British rebuilt.

1949: Emergence of idols – Abhiram Das, a Hindu priest, claimed he had a recurring dream of Ram making an appearance under the main dome of the Masjid. In the night of December 22 that year, idols were found at the place he had mentioned. While many Hindus believed that it was a miracle, then Faizabad DM K K Nayar on the morning of December 23 informed UP Chief Minister Govind Ballabh Pant about a group of Hindus entering the site and placing the idol. An FIR was filed, the gates to the structure were locked, and the city magistrate attached the property. A long legal battle ensued.

1989: VHP’s Shilanyas – Exactly three decades before, on the same day the Supreme Court approved the construction of the Ram Temple at the disputed site, on November 9, 1989, the VHP had put the first stone for the Ram Mandir in Ayodhya.

1990: L K Advani’s Rath Yatra – The most important milestone in the BJP’s political journey. BJP leader L.K. Advani launches a Rath Yatra in support of the Ram Janmabhoomi movement from Somnath in Gujarat to Ayodhya.

1992: Babri Masjid demolition on December 6 – Frenzied karsevaks clambered up the domes of the 16th century Babri Masjid and pulled it down, again breaking the assurances given to the Centre and the state governments. The communal violence this sparked across the country left almost 2,000 people dead.

1994: The Supreme Court, in the historic Ismail Faruqui judgment, says the Babri Masjid was not integral to Islam.

The legal battle is back in April 2002: The matter was back at the courts and yet another legal battle began. A three-judge Bench of the Allahabad High Court was hearing to determine the ownership of the disputed land. The HC ordered the Archaeological Survey of India (ASI) to excavate the site and determine if it was a temple earlier.

On November 9, 2019: A five-judge Supreme Court bench led by then Chief Justice of India (CJI) Ranjan Gogoi ruled in favour of Ram Lalla, and said the entire disputed land spread over 2.7 acres will be handed over to a trust formed by the government, which will monitor the construction of the Ram Temple at the site.

February 5, 2020: The Union Cabinet approved the setting up of the Trust, with the Prime Minister making the announcement in the Lok Sabha.

The Garib Kalyan Rojgar Abhiyaan is taking action on mission mode to provide employment to migrant workers who have returned to their native villages of these 6 states namely Bihar, Jharkhand, Madhya Pradesh, Odisha, Rajasthan and Uttar Pradesh.

Aim: To provide impetus to self-reliance in defence manufacturing, and to position India amongst the leading countries of the world in defence and aerospace sectors

The DPEPP 2020 is envisaged as overarching guiding document of MoD to provide a focused, structured and significant thrust to defence production capabilities of the country for self-reliance and exports.

The Policy brings out multiple strategies under the following focus areas:

Agricultural Mechanization is one of the key drivers for sustainable development of agriculture sector which helps in increasing production by timely farm operations, reducing losses, reducing the cost of operations by ensuring better management of costly inputs. Mechanization also enhances the productivity of natural resources and reduces drudgery associated with various farm operations.

Crop Residue Burning: Paddy straw burning is currently practiced on a large scale in Punjab & Haryana to clear the fields for Rabi Crop sowing because the time window available between the harvesting of paddy crop and the sowing of next crops is very short (2-3 weeks). With an objective to wean away farmers of this region from Crop Residue Burning, the scheme of CRM (Crop Residue Management) was initiated since 2018 by Ministry of Agriculture & Farmers Welfare, wherein, farmers are provided machinery for in-situ management of crop residue through establishment of CHCs (Custom Hiring Centres). Individual farmers are also provided subsidy for procurement of machinery.

Multi lingual Mobile App “CHC- Farm Machinery” which connects the farmers with Custom Hiring Service Centers situated in their locality. This app is facilitating agricultural mechanization in the country by encouraging small & marginal farmers to take machines on rental basis for agriculture practices without them having to purchase the high priced such machines. The App has been further modified and now has been given the acronym of “FARMS-app” (Farm Machinery Solutions-app).

The disaster was preceded by a large fire at the Port of Beirut, on the city’s northern Mediterranean coast.

What is ammonium nitrate and how dangerous is it?

Ammonium nitrate is a crystal-like white solid commonly used as a source of nitrogen for agricultural fertiliser. But it can also be combined with fuel oils to create an explosive used in the mining and construction industries. Militants have made bombs with it in the past.

Experts say that ammonium nitrate is relatively safe when stored properly. However, if you have a large amount of material lying around for a long time it begins to decay. The real problem is that over time it will absorb little bits of moisture and it eventually turns into an enormous rock. This makes it more dangerous because if a fire reaches it, the chemical reaction will be much more intense.

What caused the mushroom cloud?

Ammonium nitrate has been associated with deadly industrial accidents. 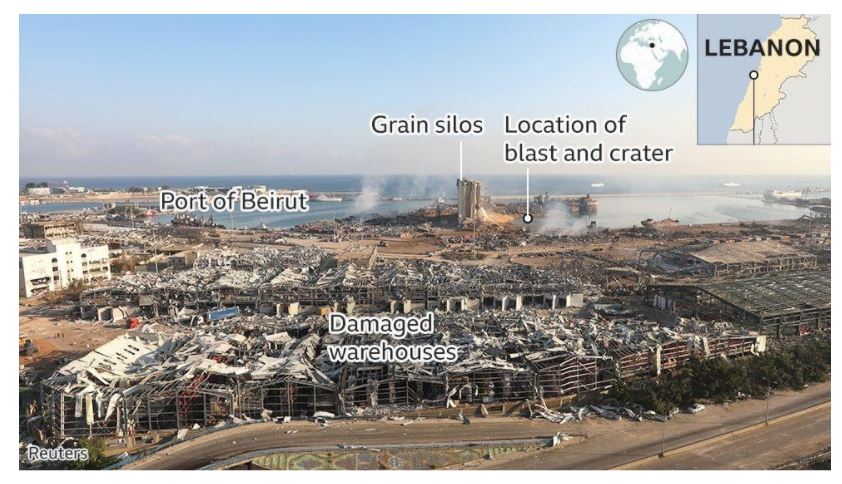 Cataract a major form of blindness that occurs when the structure of crystallin proteins that make up the lens in our eyes deteriorates, causing damaged or disorganised proteins to aggregate and form a milky blue or brown layer, which ultimately affects lens transparency. Thus, prevention of the formation of these aggregates as well as their destruction in the early stage of disease progression is a major treatment strategy for cataracts, and materials that can carry out this task could make cataract prevention affordable and accessible.

A team of scientists from the Institute of Nano Science & Technology (INST) has developed nanorods from the nonsteroidal anti-inflammatory drug (NSAID) Aspirin, a popular medication used to reduce pain, fever, or inflammation and found it to be an effective non–invasive small molecule-based nanotherapeutics against cataract.

Technology has been developed – an equipment-free fluoride ion detection and quantification in drinking water with the naked-eye. It can be operated by non-experts for household use to evade Fluorosis-based disorders.

Launch of BHARAT AIR FIBER: Introduced by BSNL as part of digital India initiates by the Government of India

IBBI amends the Insolvency and Bankruptcy  Board of India (Liquidation Process) Regulations, 2016