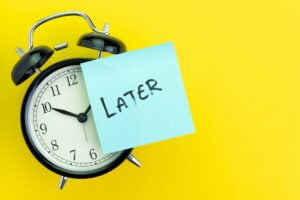 If there is any one single biggest enemy of success that takes a lion share of the blame for failures, it has to be procrastination. If you actually think about it, it is not a lack of desire or motivation to achieve something that stops people from succeeding. What stops them instead, is almost always procrastination.

It is important to understanding how detrimental a simple habit of procrastination can be to your dreams and your quality of living. On the surface, procrastination does not appear to be that harmful. It seems like a bad habit, but nothing to be totally alarmed about. After all, who doesn’t procrastinate? It is a very common problem.

Procrastination disguises itself as a perfectly justified excuse. It is a lot easier for your mind to say, “I will do this later”, as opposed to saying “I don’t think I am going to do this”. When you chose not to do something, the consequences of that action is clear. But when you chose to postpone doing something, you can never be sure of the consequences, as you can never be sure if you will complete that particular activity or not. Procrastination is the grey area of the mind you have to learn to avoid.

No activity has ever been completed in the future. Everything that has ever happened has happened in the present moment. When you chose to postpone just for the sake of postponing, you are choosing to   give in to the most common negative habit of the mind. And this can quietly but surely come to hurt you.

The easiest way to move beyond procrastination is to get into the habit of now. Instead of categorizing your activities into easy and difficult activities, categorize them into important and unimportant activities, and always be in the now to complete the most important activity at hand. Every time you are presented with a choice to either do something or push it into the future, chose to act on it now. Soon this will become a habit and before you realize, you will be out of the nasty habit of procrastinating.