Q 1. Do you think river interlinking is the most suitable way forward for water management in India? Critically examine.

As the directive here is critically examine, it is necessary to cover various angles and arrive at a fair judgment.  In the introduction explain what is river interlinking or National River Linking programme. In the main body part give both sides views regarding river water interlinking. Adding a way forward with supplementary techniques to address the issue is necessary.

The National River Interlinking Project (NRLP) is such a project. NRLP will comprise of 30 links to connect 37 rivers across the nation through a network of nearly 3000 storage dams to form a gigantic South Asian Water Grid. It includes two components, Himalayan Rivers Development Component and Southern Water Grid.

Pros of river interlinking for water management in India: 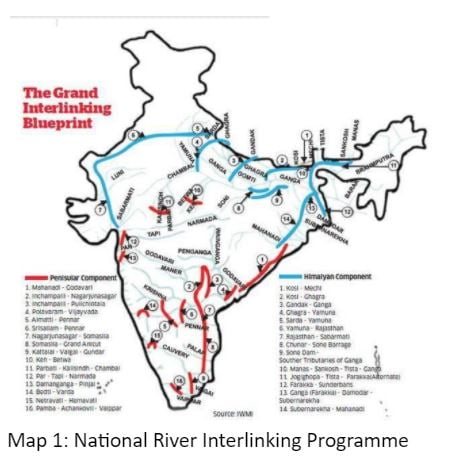 This raises questions about India’s Rs. 11 lakh crore ($165 billion) plan to transfer water from “surplus” to “deficit” basins. However, Australia’s failure of  Snowy River Scheme  where Australia ended up destroying-the river’s wetland habitat in its lower reaches is cited by the conservationist as a North star to not to give green signal to this project. Due to these reasons river interlinking can’t be the only solution to address the water management issue. Following alternative methods also needs to implemented.

Alternatives for water management in India:

With a bird’s eye view it seems river interlinking has the potential to address the water stress issue of India. However, it is necessary to look at this issue on the basis of necessity and feasibility of river-interlinking. Most suitably it should be seen on case to case basis, with adequate emphasis on easing out federal issues. Besides as a supplementary measure we can incorporate traditional water harvesting and water management techniques which will help India to have a water security.

2. Comment on India’s recent achievements on the front of border infrastructure expansion. What benefits would accrue with such expansion? Examine.

Approach – It expects students to write about recent border infrastructure expansion and how it will be beneficial in border security management in coming days.

India shares its border with seven different countries. Most of these borders are man-made and do not follow any natural barrier. India’s vast coastline and island territories also make it open to attacks and infiltration. In addition, political instability, cultural radicalism and patronage of mafia and terrorism in the few neighbouring countries make border management an important aspect to guard India’s sovereignty.

India’s recent achievements on the front of border infrastructure:

Work on critical border infrastructure such as roads and bridges has gone up by nearly 75 per cent across seven states and union territories sharing borders with China and Pakistan in the last two years, defence ministry data has showed. The creation of infrastructure would help integrate these areas with the hinterland, create a positive perception of care by the country and encourage people to stay on in the border areas leading to safe and secure borders.

3. What is the ‘Blue Flag’ certification of beaches? Explain. Why was it in news recently? Discuss.

Students are expected to write about the ‘blue flag’ certification in first part and discuss its recent significance in Indian context.

Blue Flag is awarded by the Denmark-based non-profit Foundation, Foundation for Environmental Education (FEE). The award is given to the safest, cleanest, and environment-friendly beaches of the world. Recently India became the first country in the world to receive the Blue Flag Certification for 8 beaches in a single attempt. This is a global recognition of India’s conservation and sustainable development efforts

Recently, India is the first country in “Asia-Pacific” region which has achieved this feat in just about 2 years’ time whereas Japan, South Korea and UAE are the only other Asian nations who have been conferred with a couple of Blue Flag beaches, however, in a time frame of about 5 to 6 years.

However according to the new notification, few activities and facilities would be permitted in the CRZ in order to meet the requirements of Blue Flag certification.

Although Blue Flag is the most popular eco-award, however there are certain issues which are harmful for the environment

India has now entered the bloc of 50 “BLUE FLAG” nations. The central government is planning to take this journey forward to 100 such beaches in the country in the next five years. As the ocean hosts the world’s largest connected ecosystem and provide an increasing amount of energy, food, materials to the society, development of beaches in line with the sustainable development goals will ensure healthy and productive marine environment.

4. What is the National Infrastructure Pipeline (NIP)? What are its intended benefits? Examine.

Recently, the Government has released a report of the task force on National Infrastructure Pipeline for 2019-2025. To augment infrastructure and create jobs in the country, the government task force on National Infrastructure Pipeline (NIP), which in its report projected total investment of Rs 111 lakh crore in infra projects over five years. It said that 18 per cent of the targeted investment is expected to be made in the road sector.

There are following intended benefits of NIP:

However, following challenges needs to addressed:

Availability of quality infrastructure is a prerequisite to achieve broad-based and inclusive growth on a sustainable basis. If the concerns regarding fiscal availability are addressed properly, National Infrastructure Pipeline would be a massive exercise to realise the vision of becoming a 5 trillion $ economy by 2024.

5. Examine the significance of rural infrastructure schemes for the economy.

Infrastructure plays a critical role in the economic development of any country. Presently 65% of India’s population resides in its rural areas.  If we talk about rural infrastructure in the country, then it is crucial for agriculture, agro-industries and poverty alleviation in the rural areas.

Significance of rural infrastructure schemes for the economy:

Keeping all the above factors in mind, the government of India (GoI) has initiated critical schemes for the upliftment of rural infrastructure. Such as: 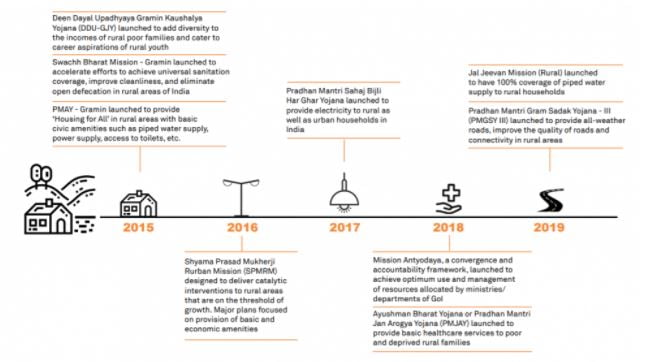 There have been several factors that have posed a challenge to development:

Several reforms that are identified as imperative in the development of Rural infrastructure are as follows:

Rural infrastructure can give impetus to overall growth and special need of Atmanirbhar Bharat can be fulfilled by bringing 69% of Indian population together with good infrastructure connectivity of all sorts.