NOTE: IASbaba’s 60 DAY questions will be posted around 10 AM. The solution will be released around 6 PM Daily.

Let us pledge to make it a big game-changer (better than last year) in the next 60 days!

Note- Download the OMR Sheet and attempt the questions exactly like UPSC Prelims. After you are done, please post your OMR in the comment section. Once the solution key is released (around 6 PM), cross-check the answers and, comment the marks (you scored) in the same comment thread. This will keep you accountable, responsible and sincere in days to come.

You can also take part in the discussion with peers.

Q.1) Arrange the following in chronological order as per the ‘Geological Time Scale’.

Q.2) Indian plate along the Himalayan Mountain ranges can be classified as what type of plate boundary?

Q.3) Consider the map given below: 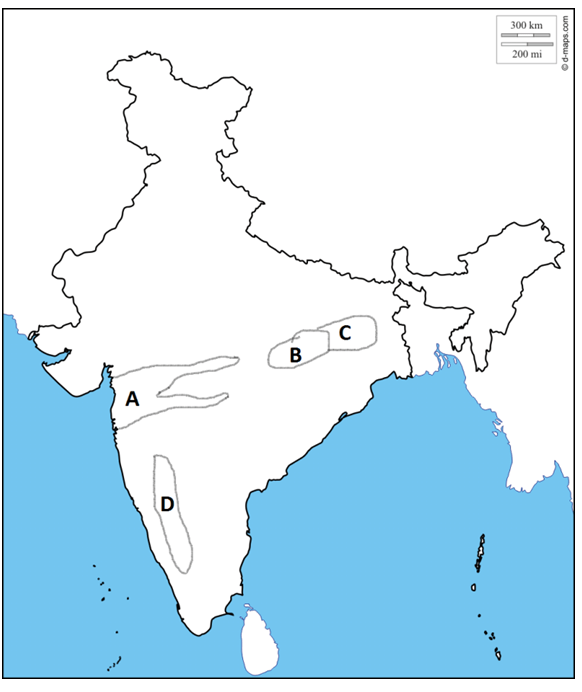 The place marked A, B, C and D in the given map are:

Q.4) With reference to Himalayas, consider the following statements:

Q.5) Arabian Sea records higher salinity than the Bay of Bengal because

Q.6) With reference to Peninsular Plateau, consider the following statements:

Which of the above statements is/are NOT correct?

Q.10) With reference to Indian soil, consider the following statements:

Q.11) With reference to Naku La, consider the following statements:

Q.12) Consider the following statements with reference to Snowline:

Q.14) Consider the following statements about the Vindhyas and the Satpuras:

Which of the following statement(s) is/are incorrect?

Q.15) Which of the statements given below is/are not true in regard to western coastal plain?

Q.16) Which among the following is called ‘Ruhr of India’?

Q.18) With reference to the Thar Desert, consider the following statements:

Which of the following statement(s) is/are correct?

Q.19) Consider the following statements about the Western and Eastern Himalayas of India:

Q.20) In which of the following areas, ‘ravines’ are present in India?

Q.21) With reference to World Trade Organization’s Agreement on Rules of Origin which of the following statements is/are correct?

Q.22) The ‘SAROD-Ports’ launched by Ministry of Shipping is related to which of the following?

Q.23) The United Nations Convention on International Settlement Agreements Resulting from Mediation is known as which of the following?

Q.25) The Leuser Ecosystem recently seen in news is located in which of the following island?

Q.26) Arrange the following States in descending order as per their ranking in 4th edition of Ease of Doing Business Rankings based on the State Business Reform Action Plan.

Q.27) The Five Star Villages scheme is launched under which of the following Ministry?

Q.29) Vyttila-11 variety of pokkali seedlings is native to which of the following region?

Q.30) The scheme of setting up of Plastic Parks with a state-of-the-art infrastructure through cluster development approach is an initiative of which of the following Ministries?

Directions for the following 2 (two) items:

Read the following passage and answer the items that follow. Your answers to these items should be based in the passage only.

There are many barriers of female employment in the course of the country’s economic development and modernization. Women’s illiteracy stands in the way of women’s employment in business and commerce, agriculture and industries, both traditional and modern.

Even on the political scene, their small representation in legislative assemblies shows how marginal women are in the whole political process. Due to immense poverty of the majority of the Asian population, the opportunity of education, participation in social and civic life are thus restricted to women belonging to the upper and middle layers of society. One factor is the decline in household industry. Since household industries constituted the largest traditional non-agricultural source of women’s employment, women were the greatest victims of the economic transformation. Within the category of household industry, those activities performed by women – such as hand weaving, oil-processing, and rice pounding, faced stiff competition from factory production. Technological changes have a dampening effect on the demand for unskilled labor. Since the majority of the women in the industrial sector are unskilled, they are the main victims of this change.

The problem of violence and atrocities against women in India is one important problem relating to women which cannot be ignored.

Women in the Asian society have been victims of humiliation, torture and exploitation for as long as we have written records of social organization and family life. Today, though women are being gradually recognized as important, power­ful and meaningful contributors to the life of men; but some of the cruel practices thrive even today. In spite of the legislative measures adopted in favor of women in our society after In­dependence, the spread of education and women’s gradual economic independence, countless women still continue to be victims of violence and extreme cruelty. The term ‘atrocities against women’ refers to as ‘a cruel and wicked act against a woman which causes her emotional or physical injury or both’.

The Bureau has identified seven crimes in the first category and four crimes in the sec­ond category of crimes. The seven crimes under the IPC are: rape, kidnapping and abduction, homicide for dowry, torture (physical and mental), molestation, eve-teasing and importation of girls up to 21 years of age, while the four crimes under the local and special laws are: commission of sati, dowry prohibition, immoral traffic, and indecent representation of women. There is a need to raise voice and fight against atrocities against women. Further, for each reported rape, many unreported rapes and for each reported eve-teasing many unreported eve- teasing cases occurs.

Q.31) What is the purpose of referring the two categories for ‘crime against women’?

Q.32) Which statement(s) is/are not made by the writer according to the passage?

Q.33) A train passes station platform in 36 sec and a man standing on the platform in 20 sec. if the speed of train is 54 km/hr, what is the length of platform?

Q.34) A man takes 6 hours 15 minutes in walking a distance and riding back to starting place. He could walk both ways in 7 hours 45 minutes. The time taken by him to ride back both ways is

What IMPACT can the ‘60 Day’ have on the final results? We will explain by taking a small example. Imagine you are sitting in the examination hall, appearing in Prelims Paper I. You have attempted 70 questions already but still unsure about a few. Then you stumble upon a question that was asked in 60 Day (and believe us, it has happened to hundreds of students countless times). You choose the right answer and submit your paper hoping for the best! Eventually, you go on to clear Mains as well as Personality Test and secure a good rank as well. When the cut off gets announced by UPSC, you realize that you have scored just one mark more than the cut off! Yes, that one mark can change your life (and it has done so to many of our students in the past). Now, imagine the kind of impact 60 to 80 marks can have! Isn’t that so fascinating to imagine?

One’s level of preparedness is always different for different subjects. Even within a subject, one’s comfort level may vary with topics. For example, one might be more comfortable in solving questions of Polity than Economics and within Polity also, one might be at ease with questions on fundamental rights than Parliament. The level of comfort and ease that one has with a subject/ topic gets manifested in the examination. However, there is no conscious effort by aspirants to micro analyze these aspects. Now, coming to the second aspect i.e. the mistakes that one commits in answering MCQs, it can be said that there are mainly four reasons behind incorrect responses in the OMR sheet. They are:

Let’s analyze them one by one:

You will realize that these problems will have different meanings for different people. For example, one might find a lack of information as the main culprit in answering wrong the questions on Culture while in Polity, lack of analytical ability is usually the culprit. The point here is that you must analyse your preparation on these yardsticks by applying them on different subjects/ topics. If one is having a headache, he/ she can’t have the same medicine for fever. Isn’t it.

This is where our revamped ’60 Day’ comes into the picture. It will give you an opportunity to micro analyze your preparation and perform better in the examination.

Now, we present you the following scales (with weightage of each scale given in the bracket) to micro analyze your preparation on a daily basis and that too subject/ topic wise:

Suppose on Day 1, questions have been framed from Polity on the topic of Constitutional History. There are 15 questions and you are able to answer 12 out of which 7 are correct and 5 are incorrect. It means you have scored roughly 11.33 out of 30. Now you have to fill on a daily basis, the following matrix to micro analyze your preparation:

Example: Suppose, the filled up matrix gets reflected in the following fashion:

Based on the total value in this matrix, you have to aim for the following measures on the scale:

Moreover, IASbaba will give a cut-off figure along with the solutions each day. If your total marks exceed that cut off along with your total N x S score lying below 20, you are on the right track and just need to keep the momentum going.

This exercise will hardly take 5 minutes of your daily time but it might do wonders for you as you will be able to gauge your strengths and limitations better.

Finally, it is up to you to take advantage of this framework. We are sure of only one thing- if you follow this program, assess yourself on the basis of the given framework and keep improving your weaker areas, success will be yours.

Importance of self – tracking:

We could have provided all of you with login id and passwords to monitor your daily performance in the 60-day program.

Instead, a simple and most beautiful way which Disqus provides is profile based commenting!

Yes, we have seen the most successful candidates who have taken the maximum benefit from this program monitoring themselves by commenting on their answers in the box given (Disqus comment). And reviewing their performance themselves once in 10 days on the progress meter.

ENTER YOUR PERFORMANCE AND GET YOUR RANK- Click Here