In News: India and China reached an agreement on disengagement of troops from the north and south banks of the Pangong Lake in eastern Ladakh. This is the first significant movement in negotiations to ease tensions in at least eight months — disengagement in Galwan valley took place in early July 2020 but it did not progress in other areas.

Six months after PLA troops came in 8 km west of the point which India says marks the Line of Actual Control on the north bank of Pangong Tso to trigger a military standoff in Ladakh, China has proposed moving its troops back to Finger 8, and return of troops by the two sides to their original locations on the south bank of the lake.

The proposal also includes moving back tanks and artillery to the depth areas on either side to reduce chances of any incident in a region where tensions are already high, and troops are battling the harsh Ladakh winter.

Under the agreement, both sides will cease their forward deployments in a phased, coordinated and verified manner in these areas.

These are mutual and reciprocal steps and any structures that had been built by both sides since April 2020 in both North and South Bank areas will be removed.

This is the second attempt to disengage frontline troops to resolve the standoff that began last May. Disengagement in Galwan valley took place in early July, but it didn’t progress in other areas. India has consistently pushed for comprehensive disengagement at all friction points and restoration of the status quo ante of early April 2020. 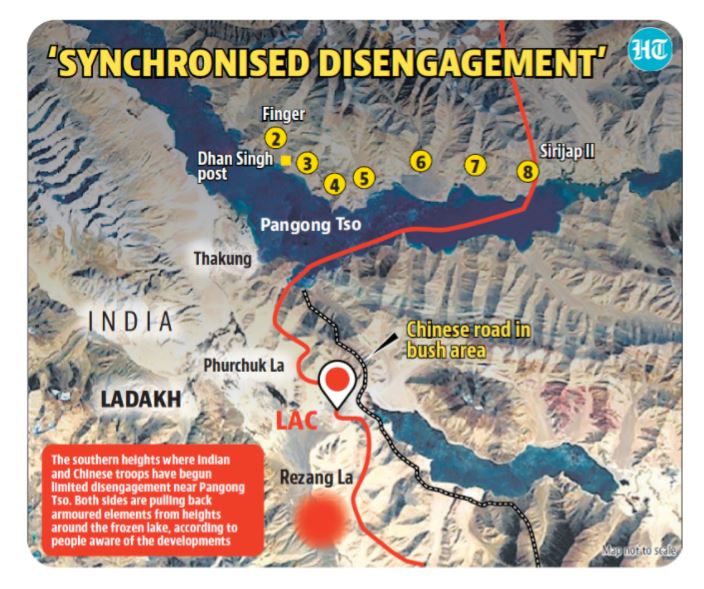 In June, 20 Indian soldiers were killed when the two sides clashed with iron rods and stones in the Galwan Valley, the first combat losses on the border in 45 years. China also suffered an unspecified number of casualties.

Why did the face-off occur?