Structural reforms are essentially measures that change the fabric of an economy, the institutional and regulatory framework in which businesses and people operate. They are designed to ensure the economy is fit and better able to realise its growth potential in a balanced way.Economies which brought structural reform are more resilient to economic shocks, achieve greater macroeconomic stability and increased productivity; and experience higher living standards over time.

Need of structural reform in India:

India has adopted path of structural reforms since the new economic policy of 1991 with liberalisation, privatisation and globalisation which was mainly an response to the Balance of payment (BOP) crises.

Therefore there needs to be new set of reforms to make Indian economy resilient in future from such catastrophic events.This will include capacity building of youth to switch between different job profiles, readying the msme sector to formalise, reducing the digital divide to avoid inequity, enabling banks and insurance sector to cater to losses arising from such events, allowing easy moratorium and restructuring of loans in future.

India had started its structural reforms in 1991 which catered to the early 2000’s period.But with the change in global dynamics after the 2008 subprime crises and the current pandemic event there is need to launch new set of reforms in each sector of Indian economy to bring it back of growth trajectory and make it resilient for future disruptions for a economically and socially stronger nation.

2. What measures have been taken to formalise the economy? What benefits would accrue if this transition becomes successful? Discuss.

The candidate needs to first define informal economy and contextualise to India.Next address the measures taken by India in this aspect and lastly write what benefits would accrue with formalisation.

Informal sector consists of units engaged in the production of goods or services with the primary objective of generating employment and income to the persons concerned. These units typically operate at a low level of organisation, with little or no division between labour and capital as factors of production and on a small scale.Majority of Indian economy is based on informal sector and therefore there is need to formalise the economy.

Status of Informal economy in India:

Measures taken for formalisation of economy: 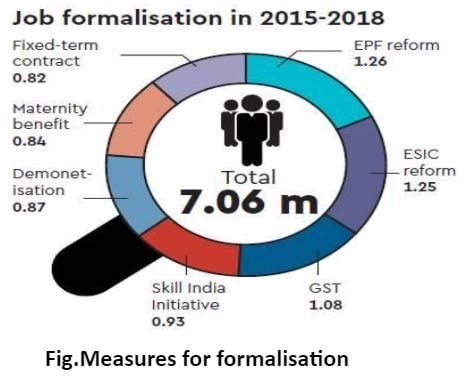 Benefits of formalisation of economy:

The informal sector employs the majority of the uneducated and unskilled labour force which, otherwise, may not find a place in the formal sector. Therefore, it is important to ensure that the transition to formal economy is a smooth, encouraging process and not a process of vitiating or punishing the informal sector. Formalisation will lead India to achieve both social and economic goals set in Sustainable development goals of 2030.

3. Has India been able to truly leverage its islands? Critically examine? What is the recent controversy surrounding the regulation of of Lakshadweep Island? Discuss

The candidate need to first introduce Indian islands.Further analyse its historical development and  potential which remains unutilised.Then address the part on recent controversy and write a balanced conclusion

India has 615 islands/islets. The majority of them, around 572 islands/islets are located in the Bay of Bengal and remaining 43 islands/islets are located in the Arabian Sea. Apart from these, there are some coral islands in the Gulf of Mannar and Khambat regions and there are some offshore islands along the mouth of the Ganga river.These islands posses potential for security, energy, tourism and strategic aspects.Recently India have constituted Islands development agency in 2017 for focused development of these islands

Status of Islands development since independence:

Even after the change in perspective over the years the islands true potential have not been utilised when compared to the neighbouring nations such as Maldives ,Singapore, and Malaysia.

Potential of Islands to Indian context:

Therefore the recent steps taken by Indian government to develop these islands is welcome and will ensure better integration of these islands and socioeconomic development.

Reasons for protests against the regulations:

Therefore the development of islands which was historically neglected have taken new pace with formation of a new island development agency and proactiveness o the administration. This forward movement needs to be continued to achieve true economic, energy, social and strategic potential of the islands of India.This will make Indian Islands global tourist hub and also ensure strategic hold over the Indian ocean region in long run.