So Here is the story for this week – Perspective ! 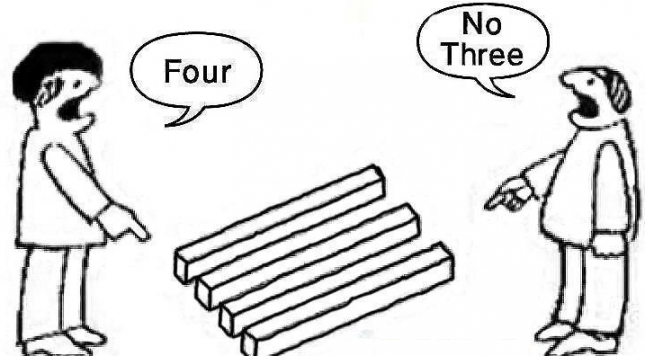 Once there was a boy who lived with his family on a farm.

They had a beautiful dog who would go down to the pond for hours every day in the spring and summer with the boy to practice retrieving various items. The boy wanted to prepare his dog for any scenario that may come up during duck season because he wanted his dog to be the best hunting dog in the whole county.

The boy and his dog had vigorous training sessions every day until the dog was so obedient, he wouldn’t do anything unless he was told to do so by the boy.

As duck season rolled in with the fall and winter months, the boy and his dog were eager to be at their regular spot down at the pond near their house. Only a few minutes passed before the two heard the first group of ducks flying overhead. The boy slowly raised his gun and shot three times before killing a duck, which landed in the center of the pond.

When the boy signaled his dog to retrieve the duck, the dog charged through the duck blind and bushes toward the pond. However, instead of swimming in the water like he had practiced so many times, the dog walked on the water’s surface, retrieved the duck, and returned it to the boy.

The boy was astonished. His dog had an amazing ability to walk on water–it was like magic. The boy knew no one would ever believe this amazing thing that he had just witnessed. He had to get someone else down there to see this incredible phenomenon.

The boy went to a nearby farmer’s house and asked if he would hunt with him the next morning. The neighbor agreed, and met up with the boy the following morning at his regular spot by the pond.

The pair patiently waited for a group of ducks to fly overhead, and soon enough, they heard them coming. The boy told the neighbor to go ahead and take a shot, which the neighbor did, killing one duck. Just as the day before, the boy signaled to his dog to fetch the duck. Miraculously, the dog walked on the water again to retrieve the duck.

The boy was bursting with pride and could hardly contain himself when he asked his neighbor, “Did you see that? What do you think?!”

The neighbor responded, “I wasn’t going to say anything, but your dog doesn’t even know how to swim.”

The boy sat in disbelief as his neighbor pointed out a potential flaw of the dog rather than recognizing the fact that what he had just done was a miracle.

People will often downplay others’ abilities or achievements because they’re unable to accomplish the same thing. Don’t let this bring you down. Just move on and keep working on improving yourself. Maintaining a positive mindset is a key part of being successful.

Furthermore, be conscious of instances in which you may be tempted to not give credit where it is deserved. Pointing out other people’s shortcomings does not make you a superior person.