Context: In a significant order, the Supreme Court has issued a slew of directions concerning rehabilitation measures of sex workers. 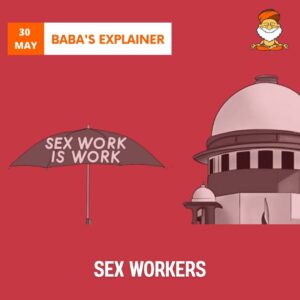 What are the slew of directions given by Supreme Court?

The bench has directed that the following recommendations of the panel be followed by all states:

The court has made it clear that these recommendations will hold the field till legislation is made by Parliament in this regard.

Supreme Court for the time being, has not passed any directions in relation to the four recommendations where Union government has expressed its reservation

SC has asked the union government to file its response to these and the other recommendations, and will hold further hearings on the matter after its summer vacation.

What is the significance of the judgement?