“India will be successful when the North East develops at par with the other developed states of India” – Narendra Modi.

India’s North Eastern region includes 8 states covering 8% of the country’s landmass and 4% of the national population representing one of the diverse cultures in the country.

The integration of Northeast India into mainstream Indian life has been on the national agenda from the very start of India’s journey as an independent nation. The region has always been seen to be somewhat alien and needing assimilation. 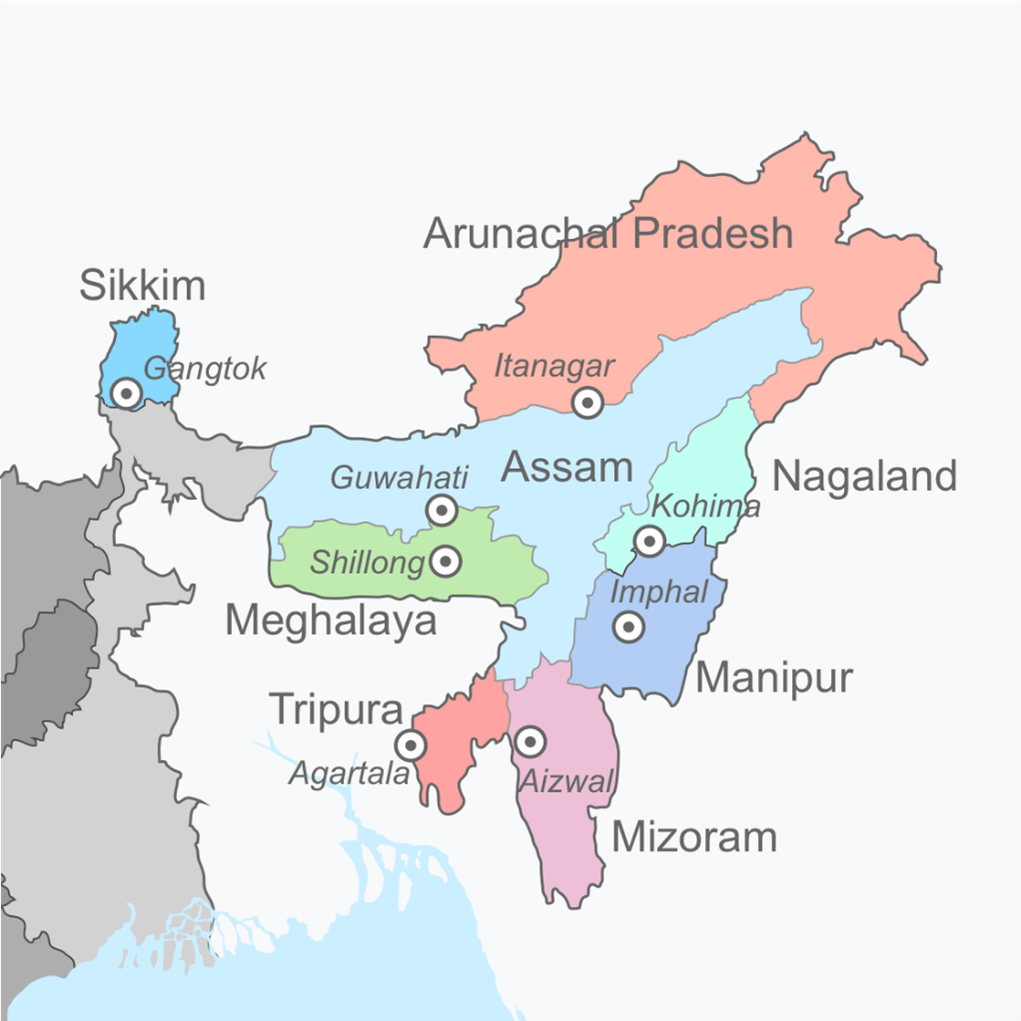 Why Northeast Indian States is considered an excluded area?

“Mongolian Fringe” — a term British India Foreign Secretary Olaf Caroe coined in a paper in 1940 — as a Crown Colony.

The British had considered leaving this as a combination of hill regions of the Northeast and Upper Burma.

Why did the crown colony plan fail?

British Assam was virtually the entire Northeast of today, excluding two kingdoms, Tripura and Manipur. In these kingdoms too, though no Inner Line was introduced, the British brought in similar administrative mechanisms separating “excluded” hills from the revenue plains.

The Crown Colony plan was ultimately dropped on grounds of administrative feasibility.

How did the States of Northeast India come into existence?

What followed the Sixth Schedule?

Other States in the region:

Amidst these, the national identity question remained incompletely resolved and insurgencies spawned and spread even in States such as Assam and Manipur.

How did the Union Government accommodate the Northeast States in India?

As India gained confidence and shed its insecurities of further balkanization after its traumatic Partition experience, the outlook towards national identity and nationalism underwent moderations, inclining towards a constitutional definition of these understandings rather than it being cultural. National integration also came to be more about the mainstream broadening to accommodate all other streams within the national territory.

Why Northeast India’s integration has still been an issue?

The northeast has several constraints which are acting as a hindrance to the regional development and mainstreaming of the society. They are:

What does the future hold – The Way Forward?

Connectivity with rest of India:

For decades, poor infrastructure and limited connectivity have acted as roadblocks hindering the socio-economic development of these states.

The plan is to build robust transportation infrastructure in the Northeast and to connect the region with the rest of the country in a seamless manner. This is in line with boosting the tourism economy of the region and ensuring that the Northeast is no longer treated as an isolated region.

The Political Landscape: The BJP, today has a strong presence in the Northeast. But what needs to be remembered is that electoral politics in the region has been less about ideology and more about aligning with the party in power at the Centre.

The Security Landscape: Political will and dynamism for propelling India’s “Act East” policy needs to be complemented with urgent measures to address two key issues — lack of “security” and “connectivity”. Addressing them is necessary to make the Northeast (NE) the launchpad for India’s interface with South East Asia.

A secure environment is a pre-requisite for giving confidence to investors to operate in the region.

Mains Practice Question –With all the efforts put in, analyze how successful the integration of north-east states has been with the rest of India.