Context: The Supreme Court will hear a review of its judgment upholding key provisions of the Prevention of Money Laundering Act (PMLA), 2002.

What was the Supreme Court ruling on PMLA?

How is a judgment reviewed?

Why is the PMLA verdict under review?

The key grounds on which review is sought are:

Amendments introduced as Money Bills: In 2015, 2016, 2018, and 2019, amendments including on bail and classification of predicate offences were made to the PMLA through the Finance Act. 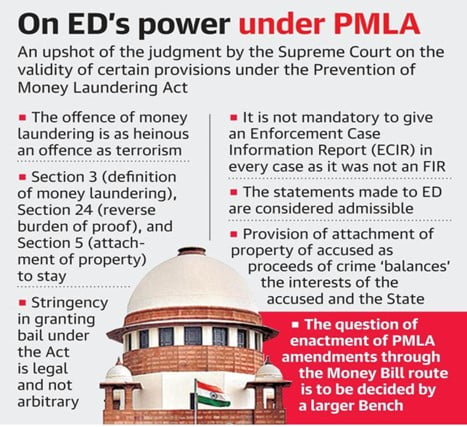 Interpretation of Section 3 of the PMLA:

Section 3 of the law defines the offence of money laundering in terms of who is punishable.

Retrospective application of the offence of money laundering: