Context: U.N. Peacekeeping chief in an interview says that Troop- and police-contributing countries need to be very much in the loop and involved in the process of making decisions on peacekeeping, and have been making a lot of efforts to improve the geographical diversity of nations providing the forces. 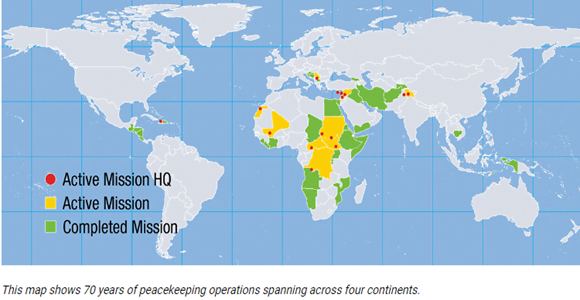 UN peacekeeping operations are not an enforcement tool. However, they may use force at the tactical level, with the authorization of the Security Council, if acting in self-defense and defence of the mandate.

UNITED NATIONS MILITARY OBSERVER GROUP IN INDIA AND PAKISTAN (UNMOGIP) is deployed in Jammu & Kashmir to supervise the ceasefire between India and Pakistan on 24 January of 1949.

Women, Peace, and Security is a key commitment of the Action for Peacekeeping initiative