In News: NATO is in the eye of the storm after one of its member nations said that a Russian missile killed two of its citizens. 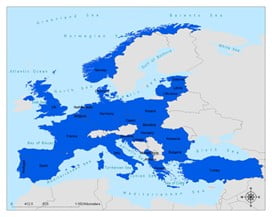