Green Tax in the aid of sustainable development

Context: Efforts are being made by Governments, civil societies, corporates, businesses and even the common people towards net-zero emissions to nullify climate change and global warming. India is in the driver’s seat in these efforts and can explore a new dimension of taxing emissions which will augment the government revenues. 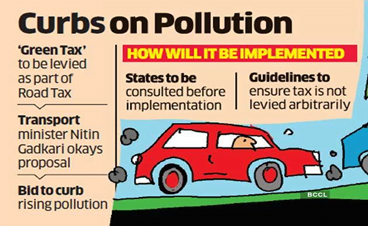 Need for a Green tax

Potential of revenue generation through green taxing in India:

Challenges of imposing Green Tax on all business:

A Green Tax could be a right step on the lines of single taxing for emissions but it poses many challenges such as passing of costs onto the customers but it would not be very significant and can be absorbed. Moreover, consumers of products and services that are environmentally unfriendly would also be made accountable to the world at large. All in all the cost has to be borne by somebody but the government is sure to be a big beneficiary.

Q.1) Which one of the following best describes the term “greenwashing”? (2022)