Technology in aid of Coffee Production

Context: A block chain-enabled trading platform for coffee that will help connect growers with roasters and traders directly is likely to be launched by the Coffee Board of India. It will ensure better realizations of prices for the growers and will also help address the traceability issue for the buyers.

About Coffee and its production in India: 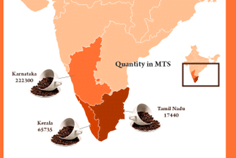 Platform will help in Price discovery

New mechanism based on blockchain platform:

Advantages of having this platform:

The platform developed by the Acviss Technologies could be a game changer for all the stakeholders from growers, traders to buyers and can give fillip to the digitalization in Agri marketing. Although it remains to see if the Coffee Board can materialize such a beneficial platform given the past records of the coffee board wherein it had failed to activate a similar block chain based e-marketplace in collaboration with Eka Plus.

About Coffee Board of India:

How many of the above are generally known as tea-producing States? (2022)