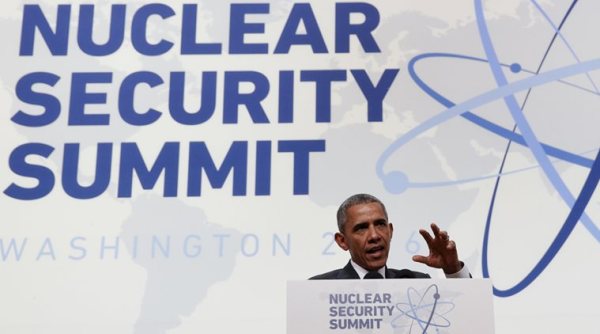 U.S. President Barack Obama speaks during his press conference at the conclusion of Nuclear Security Summit in Washington April 1, 2016. REUTERS/Kevin Lamarque TPX IMAGES OF THE DAY

A history of the Nuclear Security Summits:

Key objective of nuclear security summit: The Nuclear Security Summits have been about adoption of measures to prevent terrorist groups such as the Islamic State (IS) and al-Qaeda from gaining access to nuclear weapons, fissile or radiological material, or from attacking nuclear facilities, through an array of national, bilateral or multilateral measures.

Failure of USA to keep up its promise:

What did USA say at the fourth nuclear security summit?

This implies USA will not completely zero down its stockpile of nuclear weapons, it will only reduce the number. (by how much ? is the key over here…)

A point to note:

Will this imply an act of nuclear disarmament?

Outcome of the fourth nuclear summit:

For the communiqué and the actions plans, refer the following links:

India at the fourth nuclear summit:

India also used the summit to focus on the threat to nuclear security posed by state sponsorship of terrorist groups and the pursuit of risky escalatory policies such as the deployment of theatre nuclear weapons.

Logistics sector in India: Removing the roadblocks in transportation

The ‘toll’ on roads—

Toll roads: Way of mobilising resources for building better roads and maintaining them properly by applying the “user pays” principle

Concluded in Geneva on November 14, 1975; can be adapted for transportation across states in India

Making a hollow in the Forest Rights Act

No jobs in sight- There is a mounting employment crisis in India. The current growth model, built on large private investments, cannot address the problem.

Digital India: Its challenges and opportunities

All India Radio – Launch of Stand Up India Scheme