Hope you are enjoying Daily questions. The link for Day 29 solution is active now.

Now go back to check your answers that you posted with honest effort. Edit your answers with marks. Everyday like this you can self monitor your progress for all 60 days.

Accountability to self is the only way for success

Q.1) One of the most accepted definitions of sustainable development is “Development that meets the needs of the present without compromising the ability of future generations to meet their own needs.” This definition is given by which of the following commissions?

a) World Commission on Environment and Development

b) Environment and energy commission

Which of the above statements are incorrect?

Q.3) Heat from the earth can be used as an energy source in many ways, from large and complex power stations to small and relatively simple pumping systems. This heat energy is known as geothermal energy. Consider the following statements regarding geo thermal energy:

Q.4) Solar energy is radiant light and heat from the Sun that is harnessed using a range of ever-evolving technologies. Solar power is the conversion of sunlight into electricity, either directly using photovoltaics (PV), or indirectly using concentrated solar power (CSP). Consider the following statements regarding Solar Power Technology:

Q.5) Wind energy has a very high potential in India. Indian government has already proposed a National Wind Mission on the lines of National Solar Mission. Which of the following statements are correct Regarding Wind energy in India?

a) None of the above

Which of the above statements are incorrect?

Q.7) Carbon neutrality refers to achieving net zero carbon emissions by balancing a measured amount of carbon released with an equivalent amount sequestered or offset, or buying enough carbon credits to make up the difference. Which of the following countries are carbon neutral?

Q.8) Buildings contribute maximum to the green house gas emissions in the world. To reduce the carbon foot print of buildings, the concept of green buildings was given. Consider the following regarding Green Buildings:

Q.9) Which of the following are the result of modern agriculture?

Q.10) Which of the following statements correctly explains an Urban Heat Island?

a) A city or a metropolitan area, which is significantly warmer than the surrounding rural area, due to anthropogenic activities.

b) An island with sudden increase in urbanization activity, increasing its average temperature.

c) A volcanic island where people have settled due to population pressure on the mainland.

Which among the above is not a pioneer species?

Q.12) A Biotic interaction in which one species is harmed and other is unaffected is

Which of the above are correctly matched?

Q.16) Refer the diagrams below. Which diagram best represents the average monthly temperature changes during a year for a tundra in the Northern Hemisphere? 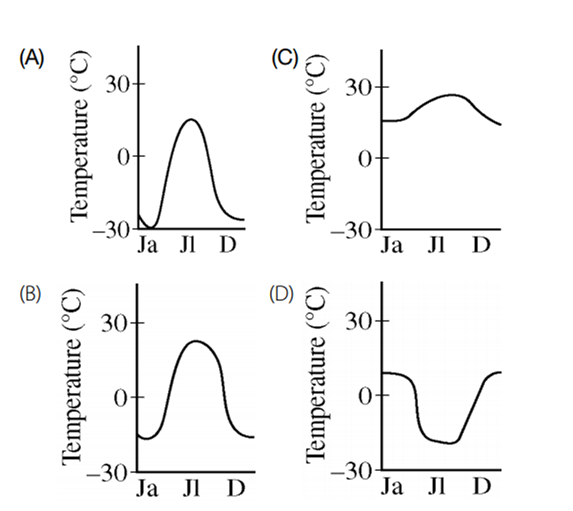 Q.17) Where do the fungi obtain nutrients and energy?

b) The primary producers only

c) The consumers only

d) All members of the community

Q.18) A lichen is best characterized as a symbiosis between which of the following?

a) A liverwort and a fungus

b) A moss and a liverwort

c) An alga and a moss

d) An alga and a fungus

Q.19) Of the following, the major cause of infant mortality worldwide is

Q.20) All of the following are likely to increase after large areas of tropical rain forests are cut down EXCEPT the

a) species diversity of the areas

b) erosion by rivers fiowing through the areas

c) rate of nutrient loss from the areas

d) average surface temperature of the soil in the areas

Q.21) Observations of lakes in areas with granitic bedrock indicate that the lakes are becoming depleted of living organisms. The primary cause is considered to be

Q.22) Which of the following is a true statement about the flow of energy in an ecosystem?

a) Smaller organisms need less energy per gram of body weight than do larger organisms.

Q.23) Which of the following is most likely the result of decreasing levels of ozone in the stratosphere?

a) A decrease in the levels of smog in major cities

b) A decrease in the rate of global warming

c) An increase in the occurrence of skin cancer in humans

d) An increase in photosynthetic activity of phytoplankton

Q.24) Weather events characterized by heavy rain, thunderstorms, and a sharp temperature drop followed by clearing are most likely related to which of the following?

a) The passage of a cold front

b) The passage of a warm front

c) The action of a stationary front

Q.25) Which of the following substances is found in the runoff of chemically fertilized lawns and is most likely to cause eutrophication in streams and lakes?

Q.26) Methane, a gas that can be trapped and used for energy, is most likely to be produced by which of the following?

a) Decomposition of organic materials in landfills

b) Burning of organic materials in incinerators

c) Heating of inorganic materials in a high oxygen atmosphere

Q.27) In the discussion of the nature of and solution to environmental problems, it is most important for students to understand that

a) science is constantly advancing, and technology will be developed to solve current problems

c) once pollution has been stopped, communities will revert to their preindustrial status

d) cultural, political, and economic issues must all be considered, in addition to scientific issues

Q.28) Which of the following hypotheses is LEAST amenable to verification by experimentation?

b) Building a new factory in a town with high unemployment is more important than preserving the habitat the factory will destroy.

d) Humans and chimpanzees share some of the same genes.

P.S- Attempt these questions within 20 minutes with full honesty and write your results in the comment box. Next day, come back and check your result. You can also discuss the important concepts and issues, in case of doubts (among peers)

All India Radio – Vice President Visit to Morocco and Tunisia

1. The proposed Geospatial Bill which seeks to regulate map creation and sharing needs to be deliberated and implemented soon in order to address the internal security woes that emanate from the nexus of cyber space and terrorism. Analyse.