Easing entry of FDI: Government has taken a bold step in liberalising the foreign direct investment norms in nine key sectors (used to account 11 per cent of the total FDI received by India)— opens up the country to the global world

Ease of Doing Business staying true to its name: Boosting the economic growth

Big mind-set shift: The move to prescribe a small negative list for FDI with most sectors under the automatic route

Present: allowed 100% FDI under the automatic route in green-field pharma (projects built from scratch) and up to 100% FDI in brownfield pharma projects under the government approval route

Changes: allowed up to 74% FDI under the automatic route for investments in brownfield pharmaceutical projects with investments beyond 74% under the approval route

Present: companies opening wholly-owned stores in India were required to comply with the local sourcing norms of 30% within five years of their first store opening 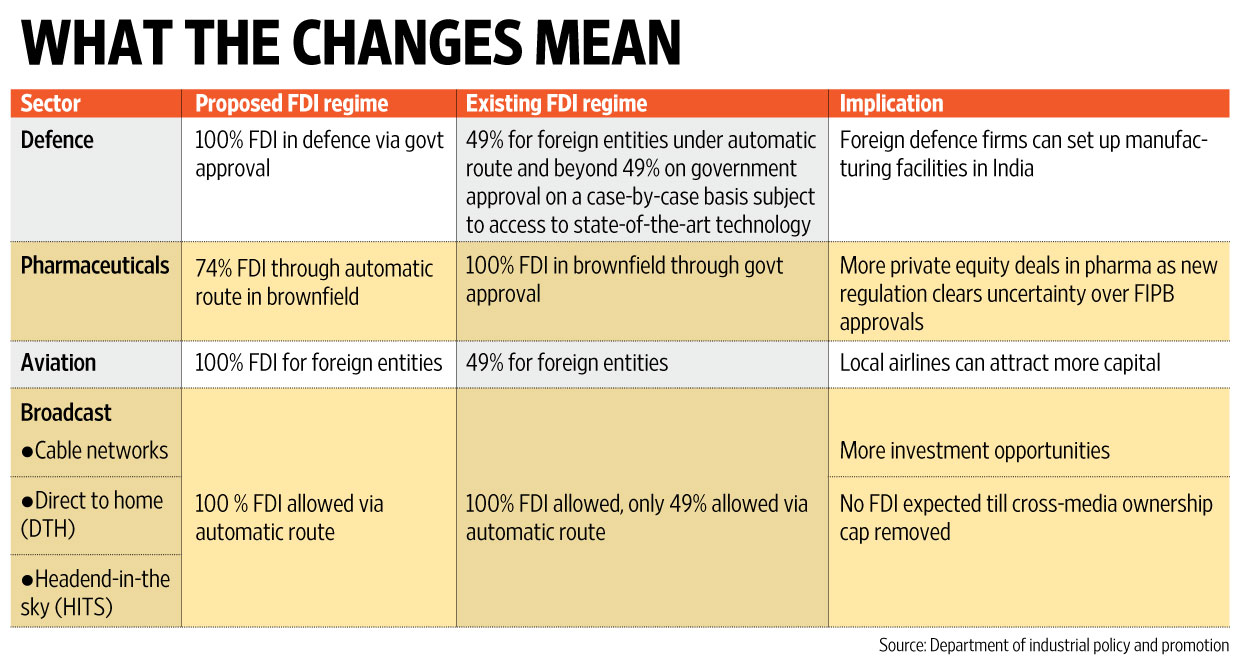 Revisiting the role of Rajya Sabha

The Parliament of India consists of President, Council of states (RS) and House of People (LS).

At present Rajya Sabha has a strength of 245 members (States – 229; UTs – 4; Nominated – 12). Every second year one third of its members retire and fresh elections are conducted for vacant seats.

Rajya Sabha has been created with the following objectives.

The vision of founding fathers of our constitution can be traced in Constituent Assembly (CA) debates. Following are the views and ambitions put out by various leaders or the way in which they saw this institution.

Whether Rajya Sabha has lived up to the expectations?

In several occasions Rajya Sabha proved its merits in Indian polity, where it has acted as an important platform of resistance to the majority rule in Lok Sabha. But also the performance of this institution has been criticized for many reasons which include –

Some instances of resistance to the legislation of LS can be remembered here.

Such instances may lead to a perception that, the electoral victory to the lower House may entitle a party to rule but not necessarily govern unless it reaches out and engages with the central concerns and interests embedded in the polity.

What Powers Rajya Sabha have?

Following are some of the exclusive powers of RS

In 2006, Supreme court upheld the removal of domicile requirement mandated by RPI Act 1951. This is seen as a great hit to the mark of diversity that was the hall mark of this house.

How Rajya Sabha should be?

Observing the sorry state of affairs in the recent elections in which saw the money game and dirty politics, there are genuine worries about credibility of this institution. Hence it is felt that, the nature and role of RS should be revisited, rather than merely think it as the parking lot for those who cannot ensure their election from a popular constituency.

Banking revival must be a priority

FDI liberalization is one part of the puzzle

Five charts on the state of India’s housing sector

The permanence of temporary workers

Kabul’s doors are closing on Pakistan

1. Feasibility of Simultaneous Polls – I