The future of the Panchayati Raj Ministry under the NDA regime continues to look bleak.

Several officials at the Ministry feel that the Panchayati Raj Ministry would soon be closed down and turned into a department under the Ministry of Rural Development. 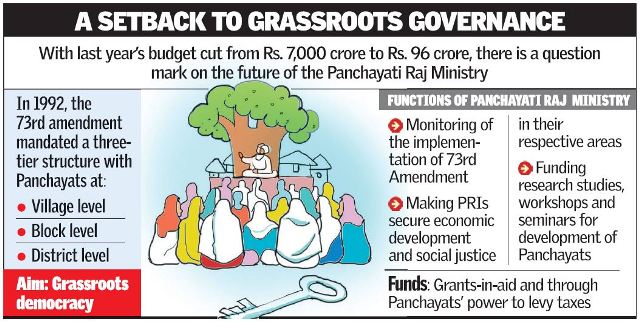 Congress leaders criticized the BJP’s intention to turn the ministry into a department, and alleged that by recent cuts and government unable to utilize huge funds for the promotion of Panchayats, the NDA is killing the Panchayati Raj institution.

However, recently there are several de-democratizing moves:

This de-democratisation of local self-government will be aggravated if a Cabinet Minister for Panchayati Raj is not available to advocate and promote the cause with Chief Ministers and his counterparts in the States.

In addition, the 73rd amendment, incorporated as part IX of the Constitution, is the joint responsibility of the Union and the States, calls for high-level coordination to promote and protect the provisions of the longest and most detailed amendment ever carried out to the Constitution.

Importance of the 73rd Amendment

It was passed virtually unanimously in December 1992 as representing the consensus among Central and State stakeholders. This consensual method must be persisted with by

These are among the key activities undertaken by the Ministry.

Providing such an all-India perspective will be seriously diluted or even entirely lost without an independent Ministry for the subject.

Moreover, merging or subordinating panchayat raj under rural development amounts to a grossly inadequate reading of the Constitution, in particular the Eleventh Schedule that lists the proposed jurisdiction (“powers, authority and responsibilities”) of national-level panchayati raj.

The Eleventh Schedule contains a wide range of entries, covers virtually the entire gamut of development and welfare in rural India ranging from schemes such as –

Recommendation: A 23.55 per cent increase in overall emoluments for employees

Is this trend welcome— Yes; Would limit the inflationary impact of the pay revisions— The 6th Pay Commission had recommended a hike of 20 per cent which was doubled by the time it was implemented and eventually amounted to about 54 per cent. It was immediately followed by a period of higher expenditure and higher inflation

More money in the hands of people—

Inflation— Will have a relatively mild impact on the overall inflation 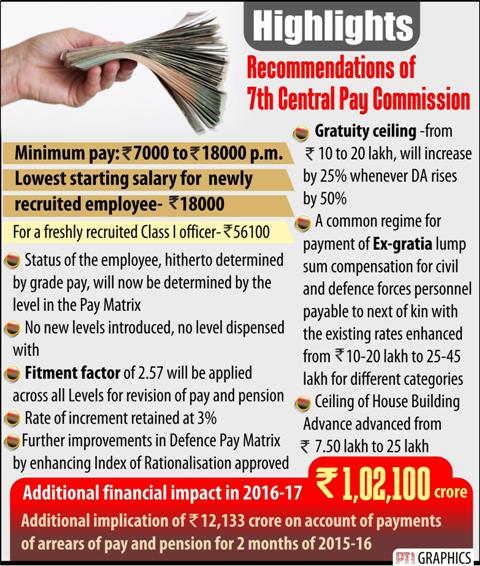 Why we need to talk about a basic income

Time has come for ‘Move India’