India’s urban population is expected to reach 600 million by 2031. However, much of this growth will not be in the core city but on its peripheries.

Population growth will not be in the core city. It will mainly be concentrated in semi urban or rural areas surrounding or adjacent to the core city – a phenomenon called ‘urban sprawl’. 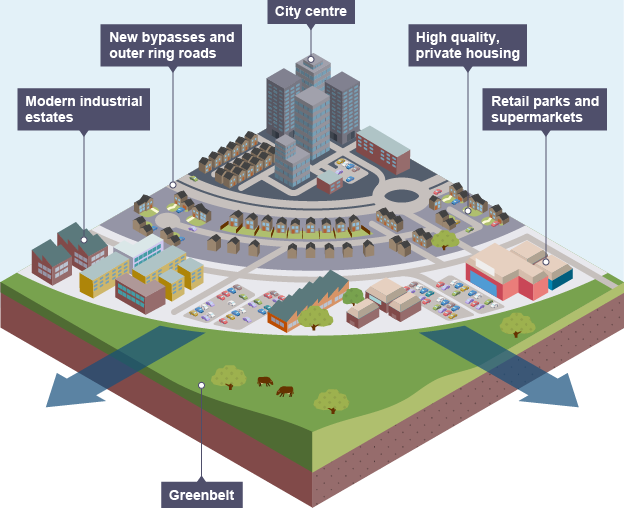 However, this ‘urban sprawl’ phenomenon poses many economic, ecological and institutional challenges.

These areas are turning more dystopia rather than Utopian

“Utopian” describes a society that’s conceived to be perfect. Dystopian is the exact opposite — it describes an imaginary society that is as dehumanizing and as unpleasant as possible.

While the area of the corporation grew by almost four times, its institutional capacity to respond to the needs of the newly added areas remains weak.

What should the state’s response be to such a phenomenon?

Initially, the state’s response was to discourage urbanization and contain the outgrowth of cities. While there are many benefits in keeping cities compact, urban expansion has become inevitable.

“The key question hence is not how to contain urban expansion, but how to respond to the challenges posed by it”.

Instead of merely amalgamating peri-urban areas with the city or giving real estate developers a free rein over these areas, a better approach is to plan for the future by identifying areas for growth and taking steps to ensure that these areas are first provided with basic urban infrastructure and services.

We need an institutional framework that adopts vibrant urban governance and planning processes to address the challenge of increasing urban expansion.

Hence, each level of urban governance—ward, zone, city and region—needs to be fortified. A useful framework for multi-scale urban planning is provided under the Union government’s Model Urban and Regional Planning and Development Law, which provides for planning at state, metropolitan and local level.

A question of human rights

A woman has right over her body and its integrity

Abortion decision is not easy

Right of a disabled foetus?

A tricky debate on abortion

Involvement of players in the administration

A River Runs Through It

How we cooked our goose at WTO