The Global TB Report 2016, recently released, has revised the estimates for the tuberculosis (TB) burden in India upwards. The country has 27 per cent of the global burden of incident tuberculosis and 34 per cent of global TB deaths.  As per the 2015 estimate, the number of TB deaths has doubled to 4,78,000 — making TB one of the leading causes of death in India.

As a result the World Health Organisation (WHO) has  decided to have the the first United Nations General Assembly session on the disease on lines similar to HIV-AIDS wherein the member states adopted a political declaration to fast-track progress in combating the HIV-AIDS epidemic.

Lack of political will has been cited as the primary reason by WHO to hold the special assembly session. There is a need to mobilise the government machinery effectively and efficiently. As per WHO, the inclusion of  Minister of Health only has not proved to be very effective and hence it highlights the need to include Minister of Justice and Minister of Finance from the nations with high disease burden such as South Africa, India and Russia. 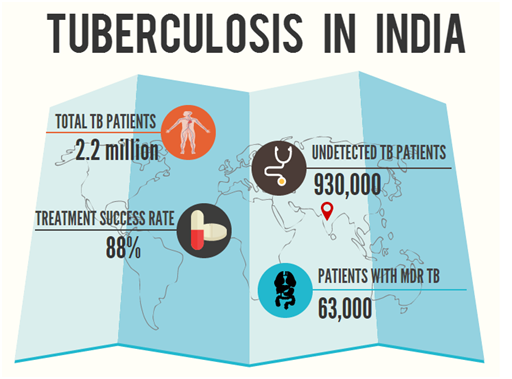 Reasons for the rising crisis

The number of deaths caused by TB and the incidence rate had been consistently dropping from the historical highs globally, but there has been a recent increase uptick that is much larger than previously estimated. In addition to the failure of political machinery, the other major reasons for this are as follows:

India’s Initiatives – Past and Present

RNTCP was originally started in 1997 and then upgraded to be implemented for the period 2012-2017. It has the following components:

Project Nikshay is a web-based solution for monitoring the effectiveness of RNTCP. The app attempts to make the notification process simpler to reach more patients and doctors.

90% reduction in incidence, mortality and catastrophic health expenditure by 2035. This has to be ensured by reliable data and evidences.

Bedaquiline is being introduced at six tertiary care centres across India and will be given to patients with MDR-TB.

A revolutionary rapid molecular test which detects Mycobacterium tuberculosis and rifampicin drug resistance, simultaneously. This test is fully automated and provides results within two hours. It is a highly sensitive diagnostic tool and can be used in remote and rural areas without sophisticated infrastructure or specialised training.

Diagnosis: The rising menace of TB  can be solved by early recognition of people having TB symptoms and put them on appropriate first line of drugs and there by eliminate it in first instance. The national TB programme has failed in identifying the people who show early symptoms.

Private Sector: The private sector has a very crucial role to play  in checking the the rise of TB. Strict guidelines need to be followed to report cases of TB to government and private hospitals needs to be penalised for failure to report early TB cases to government. This will enhance the accountability of the private players.

Technology: Technology has to be introduced and utilized in the most effective manner to ensure early access and monitoring.

Citizen Awareness: There need to be in place awareness program that let people know as to what constitutes early symptoms of TB and measures to be taken in a timely manner.

In news: It’s been a month since surgical strikes happened across LOC on terrorist launch pads. This has resulted in continuous firing from the other side of LOC and rising militant attacks which has claimed more lives of Indian soldiers. This brings forward the question if what could have been in government’s mind to declare such strategic operation.

Pakistan has to act

Certain results which was not expected (and not appreciable)

Case for extending the quota