BRICS was originally set up with an objective of achieving economic pre-eminence for the group over a period of 50 years. However, only 15 years down the line, the vision looks quite askew. The grouping does not seem very close to its initial objective. The reasons for this lie on the individual constraints as well as the challenges attached to make a grouping like this function effectively.

The challenges which these nations face are: 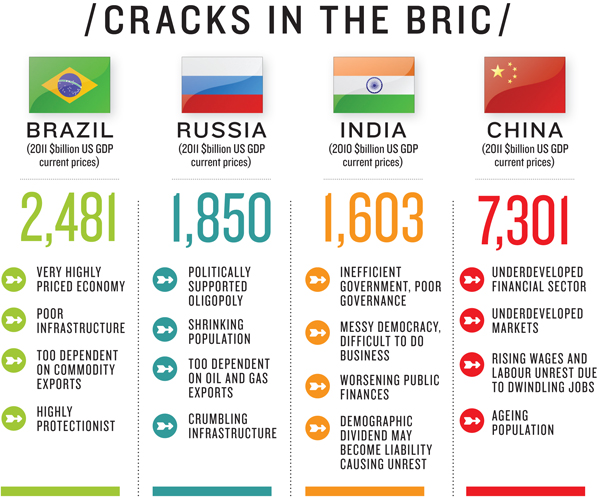 BRICS recognises the importance of wider global partnerships and it indicated intent to develop other avenues of mutual economic assistance. However, it has faced the following challenges:

The BRICS initiatives will bear fruits and show impact if they get an impetus from the combined economic capacity and evidence of economic cooperation of BRICS. The results from the latest summit declaration against terror will remain uncertain given the funding patterns for terror.

Various Indian initiatives could have been effectively implemented and would have been progressive if a more important role regarding BRICS was separately handed over to a group including the NITI Aayog, the Department of Economic Affairs of the Ministry of Finance instead of just the Ministry of External Affairs.

The 2017 edition of the World Bank Doing Business Report shows very little change from 2016 in the relative standing of BRICS countries. Though the index of doing business has a limitation of confinement of data collection to the largest city in each country, still there has not been much improvement.

There is lot of potential which can be tapped if only policy makers can get past the wilful blindness. The members of BRICS need to display the statesmanship required to rise above political differences and see the advantages of mutual cooperation.

Creation of All India Judicial Services- a road towards judicial transformation

For decades, the judiciary has been asked to do something about judicial recruitments, but it always stops short of taking an initiative in the formation of an AIJS. The Prime Minister and the Chief Justice of India have raised red flags about the problems that plague the courts. Hence, there is no time better than now to start doing something about these problems.

The AIJS is an attempt to ensure that younger judges are promoted to the SC and HCs. In the existing system, recruits join as magistrates in the subordinate judiciary and take at least 10 years to become district judges. The committee of secretaries had earlier recommended enhancing the quota for recruitment to the higher judiciary through the proposed AIJS to 50%.

Attracting the talent and improving the judiciary

Debates on formation of AJIS

Each of these grounds was dealt by the LCI’s 116th Report on the “Formation of an All India Judicial Service”. If 116th report was implemented:

In long term, uniformity in selection processes and standards which is expected to be offered by AIJS has many advantages.

Piecing together an encounter

Mcr-1 isolated in India, a further chapter in antibiotic resistance

Engaging with the enemy

Who’s choking New Delhi? No, it’s not the car makers