After a long time since the purchase of Sukhois from Russia in the late 90’s, a new deal for 36 combat aircrafts has been singed in an Inter-Governmental Agreement (IGA) between India and France. It is a spearhead for the new generation power of the Indian Air Force.

The competition for the Medium Multi-Role Combat Aircraft (MMRCA) under which this aircraft was first selected was scrapped. But the government chose the same aircraft which Indian Air Force chose.

This is a breather for the Indian Air Force as it is facing depleting fighter strength. Now arises a situation where India needs traditional combat aircraft and need them in hurry. This is because the squadron strength is down to 33 squadrons. It needs to be built around 42 squadrons as it is the committed squadron stand.

Indigenous efforts on Tejas is moving but it is going very slowly and to acquire 100-200 aircrafts will take long time. Hence, there was a need for IAF to look for another type of aircraft.

The initial contract was for 126 aircrafts. But got cut down to 36. Thus, it gives two squadrons of aircraft. But there is a clause for 18 more aircrafts also and it is hoped that as the time goes by, the air force will exercise that option to get the third squadron.

There exists a precedent for it too. The Mirage 2000 in 1985 were initially bought worth only two squadrons but later on the strength was augmented and raised the third squadron.

These two squadrons will be spearhead for the Indian Air Force formations. Generally they will be used for long range precision attack missions.

They can defend themselves while they are embarked on missions which take them deep into enemy territory.

The basic cost of the aircraft is about €91 million or about Rs. 680 crore and little over Rs.1600 crore per aircraft for the whole deal. As per the defence sources, the present agreement has many components, which are better that the original deal and the best part is the weapons package.

The weapons package includes Meteor radar guided Beyond Visual Range (BVR) missile considered the best in the class with range of over 150 km and Scalp long range air to ground missiles, with a range of 300 km, will help maintain the IAF’s air superiority as they have no equivalents in the region.

During kargil war in 1999, Indian air force had a BVR capability of only 50 kms.

The deal includes the aircraft in fly-away condition, weapons, simulators, spares, maintenance, and Performance Based Logistics support for five years. (this means that 75% of the fleet will be airworthy at any given time.)

Dassault will begin aircraft deliveries after 36 months and complete in 67 months. 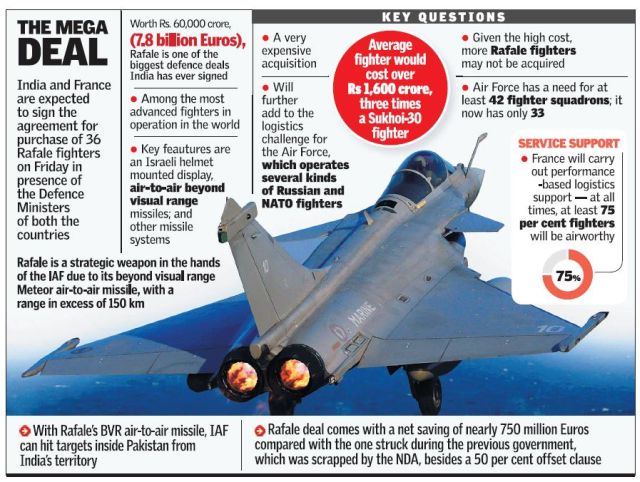 The Mig series needs replacement as they are with IAF from 1970s-80s generation. The system also takes 7-8 years to acquire and replace the defence procurement and for various political reasons, there has been paralysis in last few years in this sector. Bofors deal in 1980s has inflicted sufferings on all wings of armed forces. However, this paralysis is being faded out slowly. Air force still needs 400 more aircrafts as they have to replace the Mig 21 and Mig 27. Over the few years, it will replace Mig 29 and Mirage 2000. (5-10 years of life left)

India’s is now one of the most diverse air forces, with Western and Russian- origin aircraft with Indian and other systems incorporated in them. The IAF has been attempting to narrow the diversity to optimise utilisation and bring down the cost of operations.

In the years to come, the indigenously built Light Combat Aircraft Tejas and the Fifth Generation Fighter Aircraft from Russia will join the force, adding to the diversity. While the Rafale deal is a welcome step, it is high time India made procurements based on a long-term integrated plan.

New plans: The present government is pro-active in taking quick decision on filling the gaps of other 350 aircrafts. Now the government is planning for 200 aircrafts in a bid to upgrade military hardware and arrest a fall in operational strength.

However, the government has said that India is ready to the fighter planes from foreign manufacturers – as long as the jets are made in India and with a local partner.

1. Sometimes, even the media can become a menace for internal security. Do you agree? Substantiate. What are the possible ways to plug the shortcomings of media? Discuss.