Missing children is not a problem restricted to any specific state or part of India but has its arms spread all across. Various shocking numbers related to child related crimes are given below. This highlight the magnitude of this problem.

The number of missing children has been on a rise for a while now. The reasons for the same are as follows:

The setting up these portals and helplines are a very positive development but greater awareness, sensitisation and specialized manpower are needed to ensure that these measures provide best results in curbing the problem if missing children

The National Crime Records Bureau (NCRB) has reported an increase in the incidents of human trafficking year on year. This is one area which needs urgent attention because of its connection with missing children. As per reports, at least 67,000 children in India went missing between 2013 and 2014 out of which 45 percent were minors who were victims of trafficking for prostitution.

India is the third-largest economy in the world, with annual spending of over Rs. 6 trillion on healthcare on its 1.3 billion population. Currently, it represents a USD 40 Billion industry (figure as on 2009 Source: IDFC Securities Hospital Sector November 2010) where hospitals account for nearly 50% of pharmacies (25%), insurance and medical equipment (15%) and diagnostics (10%).

Yet, it is faced with a triple disease burden

The healthcare system in India 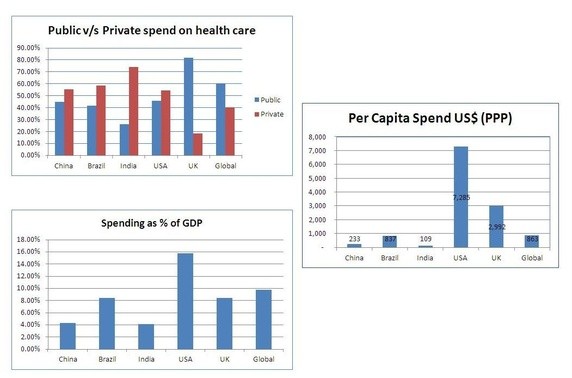 Government as an active shaper

Many countries have adopted these principles and applied to their own sociocultural context as they deemed appropriate. On doing so, these countries have shaped and organized an effective provider institutions over time where healthcare related hardships and impoverishment are being almost entirely eliminated

Designing an effective health system of this type is an uphill yet achievable journey. In India, each state represents a different social, economic and cultural environment, and will need a customized approach towards its health systems’ redesign.

In the 1960s, countries such as Thailand, Brazil, and South Korea had health statistics similar to or worse than India’s in 2010 but transformed the status quo over four decades.

It is clear from global experiences that for any country that has achieved successful reform of its healthcare system, these three core design principles have played an outstanding role and thus there is no fundamental reason why each Indian state cannot use these guiding principles to aspire to build a strong health system.

A year of living dangerously

Smallness at the border

Where’s money for a big-spend Budget?

All India Radio – Energy Crisis in India and Hydropower Projects

The Big Picture – Can Media Platforms be Alternatives to the Parliament?