Government came out with PM Garib Kalyan Yojana where black money can be declared to government at 50% tax rate (30% tax, 10% penalty and 33% Pradhan Mantri Garib Kalyan cess on tax). 25% of the declared income will be locked in for four years under PMGKY and given back without any interest on it. 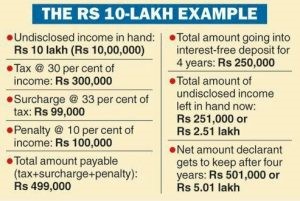 PMGKY is another opportunity to declare the black money and convert it into white after initiation of Income Declaration Scheme (IDS).

This shows that government is serious about tackling black money and is providing people opportunity to disclose it with minimum punishment.

Demonetisation is a good measure to unearth black money as most of it was in form of Rs. 500 and Rs. 1000. It was hoped that with demonetisation, more such income will be declared after IDS. However, the reality was different. Various money laundering activities were observed during the initial period of demonetisation. People were depositing their black money in others’ bank accounts, converting money into gold etc. People became scared that if they come out on their own with bulk of their demonetised notes, they may face criminal penalties.

Hence, keeping such sentiments in mind, government gave another opportunity to disclose income and be a part of progressive India.

However, government has observed that hoarding of new currency could not be stopped and also, reports of fake currencies have emerged from few pockets. Thus it might not be possible to completely do away with black money being generated and imported.

The income disclosure schemes have higher rates than normal income tax. They also add additional revenues to the government in a fiscal year. But, nowhere a person honestly paying taxes should feel that he is not in an advantageous position by paying regular taxes. Thus, whenever such income disclosure schemes are brought up, it should be noted that the highest tax rate is 30% and penalised tax rate is 50% so that honest don’t start dissuading tax.

Hence, the tax rates are not high if they are paid honestly.

How to stop black money generation?

Many people have misused Jan Dhan Accounts and siphoned off money in illegal ways. They all are being monitored under IT scanner. Those caught foe depositing money in other people’s account illegally will be charged under money laundering act and face jail term.

The money collected under PMGKY will be invested in rural infrastructure including roads, electricity etc. it is important to bring rural India in foreground and make it part of inclusive growth. The 2011 census says that 6.4 lakh villages need better roads, electricity, healthcare, education etc. to bring in development. It is for the first time in 70years that government has thought of putting tax structure for rural development. Schemes like PM Swarojgar Yojana, Gram Sadak Yojana also get a boost with money coming from such scheme.

Thus, the developments in rural India will connect it to latest developments of urban India and make advancement in health, education, IT more reachable to them.

The citizens should consider paying taxes as their fundamental duty and be a part of developing India and reduce gap between urban and rural India.

The Big Picture – Developments in Nagaland