1. What are the locational factors for Paper Industry? Is India well placed in terms of paper manufacturing? What are the challenges associated with paper industry in India? Examine.

Even though this question is specific, let’s discuss some general rules of industrial location according to geographical theory. It is not important for you to remember the name of the theory but it will guide you to write your answer in a correct manner even if you don’t know about the specific industry. 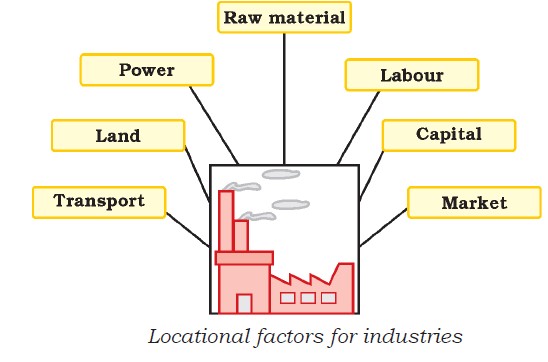 According to a geographical theory, the location of an industry is largely influenced the transportation cost of raw materials and finished product.

If an industry is weight gaining industry, i.e. the net weight of final product increases, then the industry is located near the market. Eg. Automobile, heavy machinery etc.

Before approaching the answer you need to identify and mention in the answer what type of industry is there in question according to weight. For ex. Here Paper is a weight losing industry and hence it will always be placed close to its chief raw material – soft wood or bamboo.

Several other factors which you all have mentioned are – cheap labour, energy, suitable government policies, interlinking industries like chemical industries etc.

A map is a very important part of a locational answer. So there should always be one map. 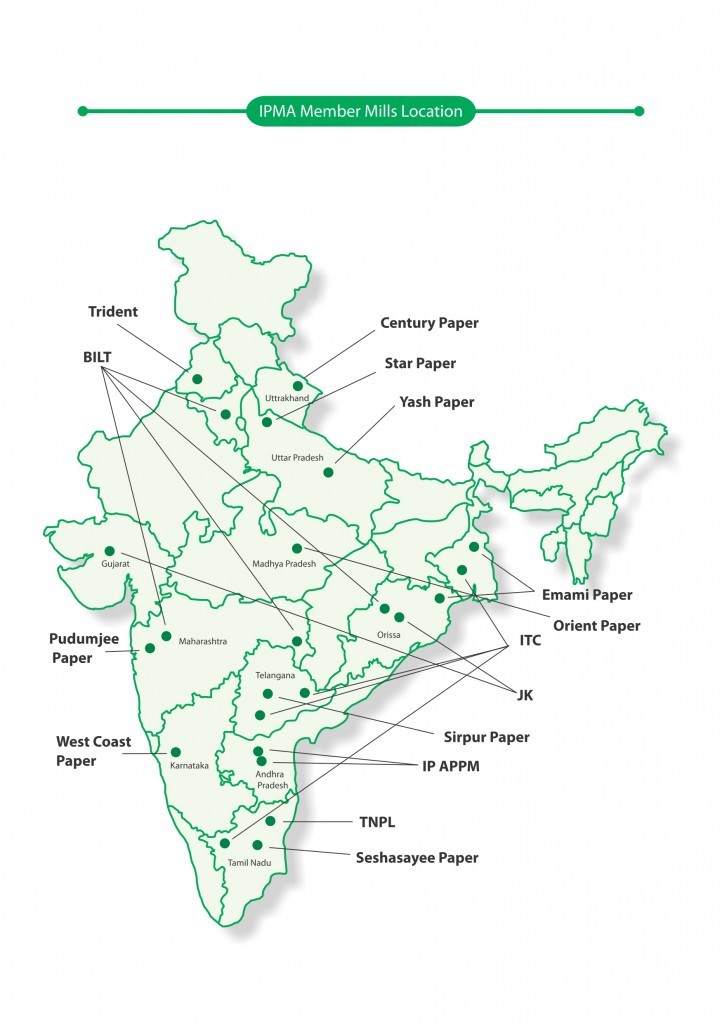 (More points can be added in this section.)

2. Discuss the conditions favourable for hospitality industry. Identify various regions in the world including India where there is high concentration of hospitality and related services.

Various regions where there is high concentration of hospitality & related services:

Contributing 7.5% to GDP, and providing massive forex reserves, this industry is being encouraged by Government through various schemes such as Incredible India, Athiti Devo Bhava campaigns, Make In India etc.

3. The automobile industry has witnessed major changes in the past two decades. Do you agree? Analyse.

Automobile industry has been the backbone of modern trade and commerce, which itself has undergone many changes over the past two decades.

Changes in the automobile industry:

4. The conviction of tainted politicians bears testimony to the strength and independence of judiciary in India. Discuss. The same, however, stands in sharp contrast with the huge pendency of cases in the judicial system. Do you agree? Comment.

A lackadaisical and limping judiciary has far more serious consequences for society than the harm it inflicts on individual litigants. It is rule of law that distinguishes us from pre-historic barbaric societies. The very foundation of civilised society rests on justice. Today, corrupt elements in government, business, politics flout the law with impunity and without fear of punishment. The authority to punish lies with the judiciary. The police, the CBI and even the much-publicised Lokpal can only accuse a person. Finality and closure in a case comes with the judgment from the court.

Recent instances of conviction of tainted politicians by the Judiciary of India (you can provide examples of Sasikala, Om Prakash Chautala, Lalu Prasad Yadav conviction) has sent a clear message to the corrupt politicians and bureaucrats that, however, rich and influential they may be, they cannot escape from the clutches of law if they indulge in corruption and other crimes. It has also boosted general public’s confidence on judiciary.

However, in the current system, where almost 30 million cases are pending, it takes anywhere between 12 to 15 years for a judgment.  Judicial ineffectiveness is to a great extent responsible for the increase in crimes like rape, murder, looting, cheating and so on.

Speedy justice is not only our fundamental right but also a prerequisite for maintaining the rule of law and delivering good governance. In its absence, the judicial system ends up serving the interests of the corrupt and the law-breakers. Failed attempts in the past to secure this right have, over the years, led to erosion in people’s faith in the judicial system, signs of which are visible in the growing vigilantism.

Our Constitution, being the source of every law that governs us, is not a self-executing document. There has to be a mechanism to enforce, in letter and spirit, all that is enshrined in it. In the absence of an effective mechanism, the Constitution is in danger of being reduced to a piece of fiction.

The need of hour is to appoint new judges, to have fast track courts for serious offence and to have law reforms (so that people can not misuse the loopholes). The conviction of few politicians is a positive step but at the same time, judiciary, legislative and executive need to coordinate to address the pendency of cases and ensure the punishment for the culprits.

It has been always said that in India, corrupt politicians are never punished. There have been certain examples in recent times, when conviction of tainted politicians resulted into punishment and stopped them for fighting any election or to acquire any position in executive. The conviction of Lalu Prasad Yadav, Shashikala, Om Prakash Chautala has stopped them in fighting elections. After the conviction of big leaders, it has boosted general public’s confidence on judiciary.

At the same time, the number of actual convictions are very few. The cases are taking long time for taking final decision. For the conviction of Shashikala, the case was regarding inappropriate wealth generated between 1991-1996 Similarly Lalu Prasad Yadav’s fodder scam is also two decades old. This shows the slow speed and large pendency of cases. We have more than 30 millions cases pending with only 21000 judges to hear them. With such a speed, people are not having any fear of punishment. In most of the cases, the case can be dragged for many years in judicial hierarchy and later on finally the tainted person dies before the result of actual case.

The need of hour is to appoint new judges, to have fast track courts for serious offence and to have law reforms (so that people can not misuse the loopholes). The conviction of few politicians is a positive step but at the same time, judiciary, legislative and executive need to coordinate to address the pendency of cases and ensure the punishment for the culprits.

5. How effective is the policy of branding government initiatives through film and sports celebrities? Explain by taking suitable examples.

Research and survey has proved that branding government initiatives through film and sports celebrities and advertisementing with celebs as brand ambassador has greater appeal to the consumers and has been effective for fighting social issues.

This is because, in India, many people have celebrities as their role model, they are ideal icons for youth and masses in general. So masses would like to follow them, try to emulate their lifestyles and thoughts, keenly adhere to their advice out of love and respect.

The policy of branding government initiatives through film and sports celebrities has succeeded in targeting general audience and has value added for some social awareness campaigns.

Governments from time to time have roped in film celebrities and sports stars to endorse govt initiatives to make greater awareness, more penetration of policies even in hinterland, to reach these schemes more closer to common man as in this way people are quickly drawn towards the context of scheme by their role models and they talk about it, follow it and gradually avail themselves of the benefits of the schemes.

The Indian government has had a lot of campaigns like ‘Kuposhan Bhagao’ – for eradication of malnutrition, DOTS campaign for Tuberculosis and Polio Free India. But, as and when Amitabh Bachchan came on TV talking about “Do boond zindagi ki” and started creating awareness it was a success. It created an awareness and awakening among the people about the Polio Ravivar – Polio Sunday – campaign. The ad was in all regional languages and key words of the advertisement hammered as reminders “5 saal ke neeche har bachcha har bar” (Any child below 5 years every child every time, for polio drops).This is perhaps one of the best examples of perfect implementation of the celebrity endorsed public awareness ad-campaign.

Actress Vidya Balan became the brand ambassador of sanitation campaign of the government of India and would promote the construction and use of toilet in rural India. The government directs people through advertisements on television to construct toilets in their houses. The ad promotes necessity for proper drinking water and sanitation and spread awareness. The ads are largely focused towards urban India for construction and use of toilets. To grow sanitation habits, hand washing, personal hygiene and managing waste among all.

According to UNICEF-WHO Joint Monitoring Program Report 2010, nearly 60 per cent of India’s 1.1 billion people still practice open defecation and close to 58% of all open defecations in the World is in India. So the celebrity involved in the campaign has a social responsibility through this ad. The concepts of the advertisements are based on rural backdrop.

This programme was s launched from Panipat in Haryana and Bollywood actress Madhuri Dixit was roped in as the brand ambassador of this campaign. The issue of decline in CSR is complex and the scheme addressed the issue within the broad framework of survival, protection, education of girl children and eradication of female foeticide.

The ad aims to generate awareness and improving the efficiency of welfare services meant for women.

Most of the Indians are having role models from sports (mainly Cricket) and film fraternity. Traditionally government promotes its scheme by giving advertisement in newspapers and radio. Now a days, television, ad-banners and social media has become crucial for marketing. Hence, government is doing a positive step by branding schemes through film and sports personalities.

There are many examples, when famous personalities have been part of government initiatives and it resulted positively.

The branding of government initiative will benefit in long run but government needs to ensure to choose the right celebrities to promote the schemes. The celebrities should take this promotion as noble cause to help our nations instead of only for commercial interests.