India being a diverse landmass with a huge forest area faces competing challenges and priorities. It is significant to uphold the tribal rights and include them in ecological conservation. An exclusionary policy is detrimental and not in line with spirit of the Forest rights act.

The National Tiger Conservation Authority (NTCA) recently ordered that there would be no tribal rights under the Scheduled Tribes and Other Traditional Forest Dwellers (Recognition of Forest Rights) Act, 2006 (FRA) in critical tiger habitats.

In India a balance between environmentalism and development is a basic necessity. Strengthening the FRA and eliminating instances that marginalize people in the name of conservation will require greater policy attention. Rights of the vulnerable and marginalised community like the tribals especially because they are voiceless is significant.

The report also noted that this was the largest leap made by any country in the top 50, thereby making India, with its rich and diverse cultural heritage and natural beauty, a prime candidate to lead the so-called Asian century in travel and tourism. 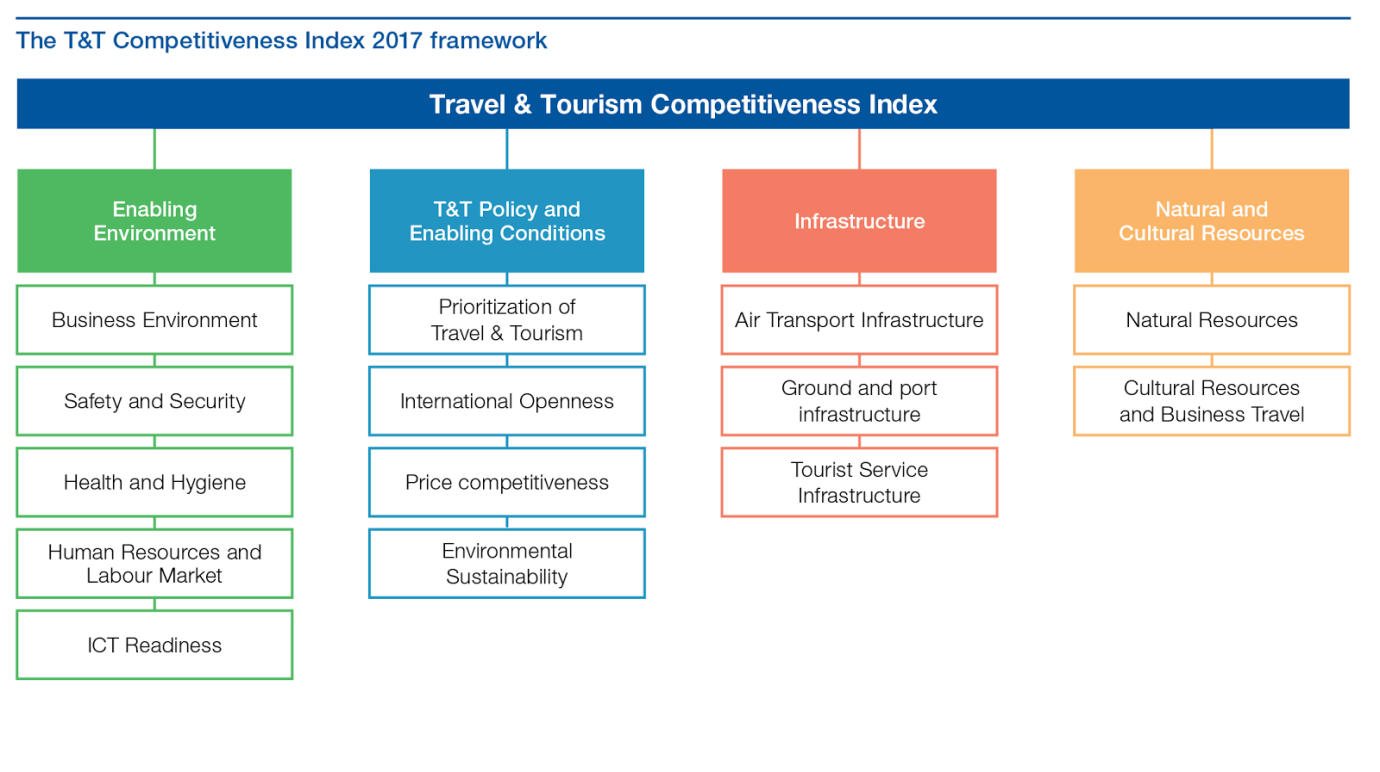 Assessment: So much for potential—but will India deliver? What are the issues? Why India’s tourism potential still largely untapped?

India’s performance in this regard tells a complex story.

On the one hand, foreign tourist arrivals have been on an upward trajectory at least since the turn of the century.

But when compared with other countries, India’s performance leaves much to be desired.

Europe’s dominant position on the list can be explained through the Schengen agreement, which allows citizens of member states to travel freely across international borders.

The US too has a visa-waiver agreement with most European Union countries as well as a handful of others for easy access.

But non-Schengen states like China—or, for that matter, Turkey (39.4 million tourists in 2015), Mexico (32.1 million) and Russia (31.3 million) have significantly higher tourist numbers than India.

However, while overall revenue from tourists in India is low because of fewer visitors, the average revenue per tourist is actually quite high.

This is because a large chunk of the tourists visiting France are other Europeans with Schengen privileges on short trips from across the borders. But while such tourists add to the numbers, they don’t always spend a lot of money.

In contrast, when a French or German tourist takes a long-haul flight to India for what is ostensibly a well-planned holiday, they tend to stay longer and spend more money.

For India, this is not as much a success story as much as it is an indication of a missed opportunity: When they are here, tourists are clearly willing to spend; but they are simply not coming here in adequate numbers in the first place.

India continues to allure international tourists with its vast cultural and natural resources with a ranking of 9th and 24th respectively. In terms of price competitiveness advantage, India is ranked 10th.

India is ranked 55th, up by 14 places in terms of international openness, which has been possible through stronger visa policies. Implementing both visa-on-arrival and e-visa has enabled India to rise through the ranks.

The key reasons for India’s jump in the Travel and Tourism Competitive Index 2017 should be attributed to the pro-active steps taken by the Indian Government in terms of the development of tourism infrastructure and easing of entry formalities for tourists by introducing the e-visa facilities.

Problems such as cumbersome visa regulations, bad travel infrastructure, poor sanitation, collapsing law enforcement systems and concerns about women’s safety. On each of these counts, India ranks poorly on the WEF index. 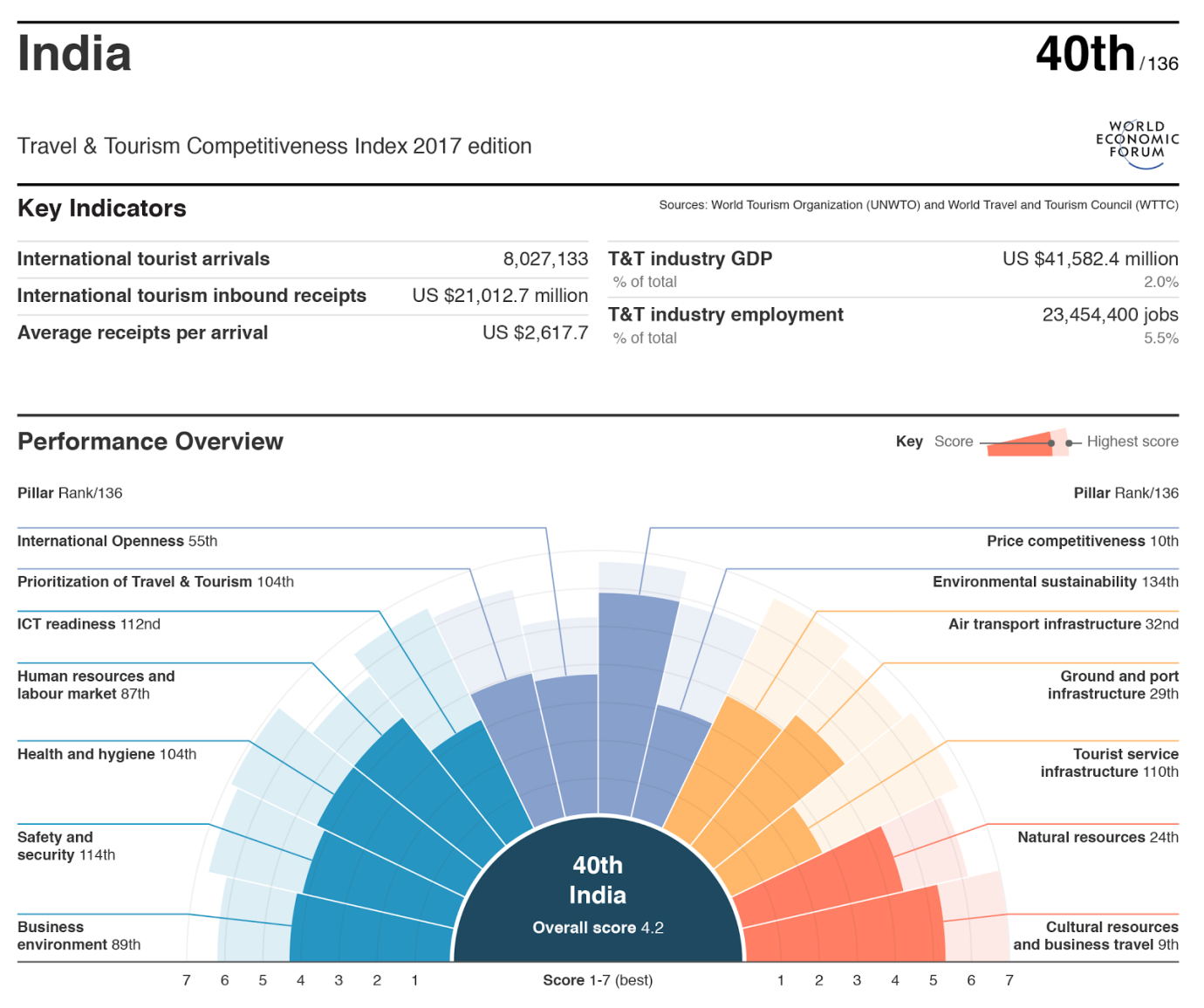 Other factor is majority of visitors to India are business tourists (who expectedly are high-spenders and takes five-star route). It is worth questioning whether India is getting its fair share of budget travellers especially since it is otherwise one of the most affordable travel destinations? Are middle-class tourists, who want a certain degree of comfort and hassle-free travel but cannot afford to go the five-star route, staying away?

If true, that is another challenge for India as it will have to prepare for the changing profile of the international tourist. As the WEF report notes, foreign travel is no longer a luxury enjoyed only by wealthy Westerners. The lowering of trade barriers and the rise of the middle class in many emerging economies mean that North America and Europe, which have dominated the travel markets till now, may give way to international travel from Africa, Asia and the Middle East.

Currently, India receives the maximum number of tourists from the US, followed by Bangladesh, while regionally, Western Europe and North America make up for a large chunk of the country’s foreign tourists—at 23.42% and 18.62% in 2015, respectively. South Asia tops the list with 24.25% but that is to be expected given that it is India’s neighbourhood.

What is of concern though is that other regions that are expected to send out tomorrow’s tourists don’t seem to have India on their radar.

The silver lining here is that all these regions, except Eastern Europe, have been sending more tourists to India than before. The government should be cognizant of the fact that a lot more needs to be done on the home front. It has to start by liberalizing the visa regime which is expected to improve the numbers quickly. But that’s only the first step. Making it easier to visit India won’t do much when being a tourist in India is replete with problems.

A solution in search of a problem

The Blind Men Of Niti Aayog