Monetary policy is a crucial economic policy tool for the economy. It controls credit flow and hence regulates growth. Inflation targeting is the main idea of the policy with the new Monetary Policy Framework agreement signed. The first monetary policy statement in the new financial year has important signals for the government.

Following its decision to shift from an accommodative to a neutral monetary policy stance in February no change in policy stance was expected from the RBI.

Fiscal policy and monetary policy have to go hand in hand. Especially with the new framework and wide ranging consultations monetary policy will be accommodative. But the crucial concerns raised by the policy should be heeded to and populism should not be the sole driver of politics. Good politics can sustain with good economics only.

Last January, Prime Minister Narendra Modi introduced a new crop insurance scheme with the aim of bringing 50 per cent of the country’s farmers under insurance cover in three years.

Narendra Modi led National Democratic Alliance government had claimed that – “The new Crop Insurance Scheme is in line with One Nation – One Scheme theme.  It incorporates the best features of all previous schemes and at the same time, all previous shortcomings / weaknesses have been removed. The PMFBY will replace the existing two schemes National Agricultural Insurance Scheme as well as the Modified NAIS.”

Highlights of the scheme: 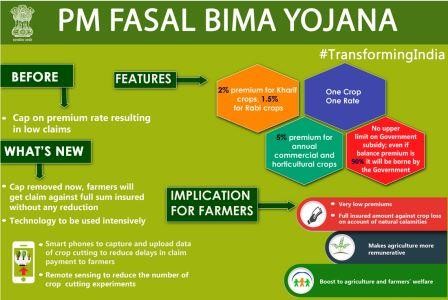 Assessment: The below article assesses the performance of Fasal Bima Yojana

As we read above, bringing down the premium rates substantially in the new scheme, the government had targeted covering 50 per cent of farmers in three years.

As per official data, in 2015, only a fifth of the country’s farm land was under crop insurance.

The limited risk coverage under these policies was a dampener, say experts. In mNAIS, the premium was capped at 8-12 per cent of sum insured to limit the government’s subsidy outgo.

So, in crops where actuarial rates were higher, the insurance company reduced the sum insured proportionally and many a time it was not sufficient even to cover the farmer’s cost of production.

In the Pradhan Mantri Fasal Bima Yojana, the cap on premium has been removed.

Kharif 2016 was the first season of Pradhan Mantri Fasal Bima Yojana. A release of the Ministry of Agriculture in December says 366.64 lakh farmers (26 per cent of the total) were covered under crop insurance, an increase of 18.5 per cent from kharif 2015. The area under insurance coverage increased 15 per cent and the sum insured jumped 104 per cent. This is good progress for the first year. However, numbers from Agriculture Insurance Company (AIC) show that the increase has mainly come from farmers who had an outstanding crop loan.

Experts say that PMFBY if implemented properly across the country would mitigate farm distress to a large extent especially when the erratic climates have become a norm rather than exception.

These loopholes are to be addressed along with making steps to improve the insurance coverage.

Friendship is a flowing river: Sheikh Hasina writes for The Hindu

Is India a racist country?

The banality of evil

Working out the true impact of demonetisation

India is not moving to counterforce doctrine

The economics of happiness

The road ahead for Indo-Bangla relations

The Big Picture – Is Aadhar Data Prone to Misuse?