1. Agricultural subsidies not only distort the market but also have serious implications for the environment. Examine.

o Market distorting nature of agricultural subsidies:
1. Subsidized rates of agricultural inputs has various ramifications on free market economy.
2. Fertilizer industry has been debt ridden since a decade, the amount entitled to these companies are seldom sufficient to clear the debts.
3. Production units are inefficient owing to lack of capital to induct cleaner technologies. These give rise to environmental damages.
4. Urea black marketing also distorts the market prices. Black marketing to Nepal and Bangladesh is detrimental to our financial system.
o IMPACT ON ENVIRONMENT:
1. Availability of agricultural inputs at subsidized rate has resulted in its misuse.
Fertilizers, especially UREA when made available cheaply has resulted in overuse, which degraded soil quality, and in return affected the output productivity. Low productivity of Punjab in wheat can be attributed to above cause.
2. Subsidized irrigation pumps and electricity has affected the ground water levels severely.
3. Shift in agriculture towards production of cash crops has caused land degradation in vast areas, sugarcane, rice and wheat are produced in areas which are geographically not fit for the cultivation.

2. Do you think replacing the existing public distribution system and other benefits for the BPL families with a Universal Basic Income (UBI) will be a fiscally prudent decision? Critically analyse.

Replacing the public distribution system with Universal basic income may not be fiscally prudent. Reasons being:
i. It will take a huge chunk out of GDP, more than what the current distribution systems engulf.
ii. This will be a cause of worry especially when there are various other areas such as Education, Defense, Infrastructure, which will need more fund allocation with time.
iii. Government might push to open up the economy to more FDI and also float debt instruments to as to garner more resources to meet the requirements. All these in turn will make Indian economy more vulnerable to external shocks.
iv. UBI also has high chances of triggering inflation. With more liquidity, considering the size of Indian economy, it will be immensely volatile to minor shocks resulting speculative inflation.
v. With government, having control over lesser resources it will be more difficult to control the situation in case of rapid swing of prices.
vi. Implementation of UBI will further draw India away from its FRBM targets of reducing the fiscal deficit as a percentage of GDP, within a controllable range

3. That technology can empower is a well established fact. However, the penetration of technology into the agricultural sector is an unfinished agenda. Do you agree? Examine.
“The penetration of technology into the agricultural sector is an unfinished agenda.”
This is the key line in the question. Now when we see the word technology these days, the only aspect we think about is IT and communication. Most of you have restricted yourself in this domain.
There are several factors for lack of technological penetration.
Historical: Redistribution of land provided land to the farmers, but the size of the land holding is very small. Also it is being reduced because of hereditary laws of the country. So advanced technology cannot be used. Also for a small farmer it won’t be economically viable.
Institutional: Lack of proper financial facilities. Farmers are still dependent on money lenders for basic loans. How can they invest more money on technological advancements?
Lack of awareness old mindset also prevents them from taking new approach.
Lack of RnD: Lack of research and development in agricultural field has also been a drawback. Many countries has opted for automisation of many agricultural process, while we are still stuck with manual labour which is more time and energy consuming.
Infrastructure: Basic hard infrastructure required for technological advancements is not present. Roads, electricity, storage facility, back end and forward end linkages etc are not present.
Digital communication, internet, as well as proper banking facilities are not available.
Illiteracy: There is high level of illiteracy in the rural areas (Not all farmers are illiterate as mentioned by some of you.) because of which they are unable to adapt to new methods. Moreover, they are also unable to fully utilise the internet facilities.
The above mentioned factors are the importance reasons why the technology has not penetrated to the extent it should have been.
Note: In the conclusion mention some of the schemes and programs started by the Government to address this issue.
Best Answer : Ashoka

Technology also played a significant role in Green revolution as that was evident in introduction of heavy machinery like tractors, thrashers etc in production. But still deep penetration of technology in agriculture is missing. Technological advent in following sectors can finish the remaining agenda-
1. Irrigation:- India still practices flood irrigation through canals, wells and tank irrigation. Technologically sound micro irrigation practices like Sprinkler systems and Drip irrigation could save not only water but the fertilisers rquirement also.
2. Renewable enegy: It can replace old infrastructure with cost benefits for example solar pumps. It can reduce burden of agricultural extension services of farmers like electricity bills. Thus helping to achieve mission of doubling the farmers income.
2. Agricultural research and education:- with technology national agriculture research and extension services could be upgraded. Research and development works in agricultural sector is in dismal state. It has to be promoted with technological edge.
3. Soil health:- Health of soil could be improved if technical education is imparted to farmers. Soil Health cards are significant steps in this regard.
4. e-markets:- e-NAM is an effort to connect farmers to national market to sell their produce. They would be knowing prices in different mandis. It could remove farmers exploitation from intermediaries and would help in farmers income rise.
5. Digital empowerment:- All above integration of farmers with technology could be possible in a smooth manner if farmers are digitally empowered. Digital india mission contains significant provision for it. 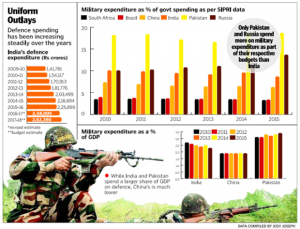 For assessment of the budgetary allocation to the defense sector and whether it is inadequate, refer the below links:

5.The Indus Water Treaty remains a major irritant in Indo-Pak relations. Do you agree? Examine the issue and associated developments in the recent past.

You should mention about the recent news related to Indus water treaty. Also give details in brief.

Your conclusion should be a balanced one which should say that this treaty is one of the most successful one and it should not be considered unfair due to current conditions. Efforts should be made to utilize it fully by Indian side.

India need to look all aspects before taking any paradigm shift change regarding existing water treaty because it will affect our relation with other neighbor nations and position as global major power.

The Indus Waters Treaty is a water-distribution treaty between India and Pakistan, mediated by the World Bank (then the International Bank for Reconstruction and Development). The treaty was signed in Karachi on September 19, 1960 by Prime Minister of India Jawaharlal Nehru and President of Pakistan Ayub Khan.

Since the ratification of the treaty in 1960, India and Pakistan have not engaged in any water wars. Most disagreements and disputes have been settled via legal procedures, provided for within the framework of the treaty. The treaty is considered to be one of the most successful water sharing endeavours in the world today.

However, there is breeze of irritation between Indo-Pak relation on following points:-

-> In a world burdened by burgeoning populations and faced by declining water resources, water is likely to trigger conflict. For India and Pakistan, too, fed as they are by the common Indus river watershed, water is a serious issue.

-> The Indus river, having its source in Indian Kashmir and flowing through Pakistan, is the primary freshwater source for the latter. Where India certainly had its own ambitions for the profitable development of the Indus-basin, Pakistan felt acutely threatened by a conflict over the main source of water for its cultivable land.

-> Pakistan’s objection against the reservation on our developing of Kishanganga Dam on the Neelum river, even though an international arbitrator has recognized India’s right to go ahead with the project as long as the water level in the reservoir is not below minimum.

-> In aftermath of the 2016 Uri attack, India reviewed the treaty and its provisions and proposed several changes.

Despite several issues of irritation, both the countries with new dams and irrigation canals, the Indus and its tributaries could be made to yield the additional water each country needed for increased food-grains production.