1.Frame a short citizen charter for the Public Distribution Department of a state along with vision and mission statements.

A good citizen’s charter should contain the following things:

the image given below shows how a Citizen charter must look like. 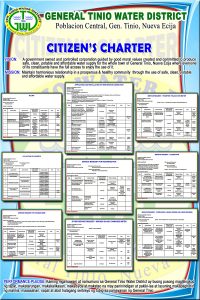 2.What is work culture? How does good work culture improve productivity of a workplace? Discuss.

Organizational culture is a system of shared assumptions, values, and beliefs, which governs how people behave in organizations. These shared values have a strong influence on the people in the organization and dictate how they dress, act, and perform their jobs. Every organization develops and maintains a unique culture, which provides guidelines and boundaries for the behavior of the members of the organization.

The seven characteristics of organizational culture are:

The permutations and combinations of these characteristics gives a unique culture to an organization.

A good work culture is required for following reasons:

(More points can be added to this.)

1)By emphasising on the organisational beliefs and principles, it seeks to influence employees and align them with it. Thus:

3) Prevents a dictatorial approach to decision making. Employees are involved in the decision making process(PARTICIPATIVE DECISION MAKING IN LEADERSHIP). this leads to :
a)Lower employee turnover

4)Provides certainity and clarity about what the organisation aims for. This is vital in increasing dynamism in the external environment, and helps employs deal with uncertainty better.(Uncertainiity=demotivation=lower productivity)

Organisational culture is being increasingly emphasised by the current govt through its various initiatives like:

1)Emphasis on a SMART police.

2)Top level messaging on the emphasis of citizen centricity in administration.

3)The tough stance and action on graft and corruption

4)Increased accountability(PMES,etc) along with removal of non performing employees(recent compulsory retirement of some bureaucrats)

3.Service delivery is not an end itself. It must result into measurable outcomes. Discuss in light of the public service delivery mechanism in India.

Delivery of various public goods and services is one basic responsibility of the State. Though with expansion of the market many services are available in the private sector but some of the core services will continue to be delivered by the State only, because of nature of such services.

The State has a very important role to play in making available some essential public goods and services (henceforth to be called services only), which ensures certain minimum level of wellbeing to everyone in need of those. Financial and other resources under command of the State are always limited and, therefore, the services are to be delivered efficiently and effectively to ensure desired level of wellbeing to all the citizen and within as  short time as possible.

Generally, the focus is what the delivery system perceives what has been delivered and not what the citizen receives in meeting their needs. Assessing that requires change in mind set in developing citizen-centric way of looking at things and to see the success through them and in terms of outcome leading to better wellbeing of the citizen.

The bureaucracy has failed in transforming itself by developing right attitude and responsiveness towards the citizen and in perceiving that they have obligation in reaching various public services to the citizen as their right.

State interventions in transforming the society have, therefore, not achieved desired results when seen from the point of view of the outcome for the citizen.

Delivery of services to the poor needs special mention because of their dependency on public services for survival and coming out of the vicious cycle of poverty and poor human development. Quality of delivery of such services is adversely affected by the low level of awareness of the service recipients, particularly their inability to assess the quality of service delivered in absence of knowledge about what is their entitlement and there is lack of empowerment to articulate their grievances.

Delivery of services continues to fail in such cases because of poor responsiveness of the service providers, who have been conditioned in the current bureaucratic environment of controlling and patronizing various welfare measures for the poor. Also, the institutional mechanism is such that they can continue to ignore the grievances of the poor. Experiences from other developing countries also show that service delivery to the poor normally fails leading to substantially worse outcome for the poor. Thus they continue to gain the least from economic development programme, have poor educational attainment and  health outcome (in spite of having programme for universal coverage for health and education) because of services failing to reach them as well as other determinants of service outcome which affect them badly. Services may not reach the poor due to difficulty in accessing services including their failure to bear the implied cost, even for receiving free services.

In order to improve this, a service model was proposed by World Development Report 2004. It has five features namely, delegation, finance, performance, information about performance and enforceability.

The report also identifies four broad roles by different actors in the chain of service delivery, which are:

The accountability of these four actors in the PD system can ensure measurable results once the service is delivered.

Go through the following link to understand the PD System in India in Detail.

Best Answer: No best Answer for this

4. What is your opinion on the recent controversies surrounding Goa and Manipur Governments? Discuss.

Goa and Manipur contravercy revolves around the recent appointment of Chief ministers in both the states by the governor. Where even after a majority share or being single largest party,the Chief minister was appointed from other party.

Those in favor of the appointment

Those opposed to appointment

The issue in Manipur and Goa also highlights the dominance of political party an the centre using power equations to create its own government at state level.This also neglects the minority voice which are in significant numbers  in these two states.

The foundation of Indian democracy in based on respect for peoples mandate and respect of democratic principles instead of a power tussle between legislators.It is the responsibility of constitutional functionaries to abide by the democratic ideals and abstain from setting a bad precedence for future government formation.

5. Many steps have been taken by the government to regulate the funding of political parties and bring transparency. Are these provisions adequate? Examine.

Election financing in India comprises funding received by political parties and expenditure incurred by the candidates during elections, these are regulated by multiple laws such as Representation of Peoples Act , Income Tax act , FCRA etc. Despite having multiple regulatory mechanisms lack of transparency in the whole process is resulting in corruption and black money.
.
Problems in election financing –
1.Lack of Transparency – Various reports showed that majority of funds received by parties are declared as by anonymous donors and many parties do not file income tax declarations on time.
2.Corporate Funding – Despite having tax exemptions, many corporates does not reveal their contributions to secure their relationship with other parties.
3.Foreign Contributions- Recent amendment to FCRA allows political parties to receive contributions from foreign companies, there by leaving a scope of external influences.
4.Expenditure – While their are restrictions on the amount that can be spent by a candidate, allowing other party men/relatives of the candidates to spend without restrictions is resulting in ‘money politics’

5.) The EC limit of 70 lac and 28 lac per candidate for LS and Leg Assembly elections are extremely low and need to be changed.

Write a suitable conclusion citing further reforms like making every donations public as done in US,Political parties under the ambit of RTI,State funding of elections as recommended by Dinesh Goswami committee etc.