The fresh skirmish at the tri-junction of India, Bhutan and China is part of on-going border tensions. The stand-off continues with both sides raising the temperature gradually.

The border dispute has again raised the spectre of Chinese encirclement. It comes close on the heels of India’s boycott of the ambitious Belt and Road Initiative (BRI) summit in China. The recent dispute highlights the fraught and schizophrenic nature of the India-China relationship. China recently increased its fleet presence in the Indian Ocean Region.

Doklam standoff: What is different this time?

It is much more complicated for following  reasons:

There is enough space for both India and China to grow. Any sort of stress emerging from issues like BRI, NSG membership, Masood Azhar issue shouldn’t be used as an excuse to create a border skirmish. Its time a strategic dialogue is initiated between the two nations so as to recalibrate the relationship between India and China. It is time for a new “modus vivendi” between the two countries.

Almost three centuries ago India was the richest country dominating the world economy with textile exports. However, lapses in our policies and certain decisions in those years allowed the British to rule upon us. As a result of the colonisation, India was exploited for the benefit of countries progressing as a result of the Industrial Revolution.

As a result of the above, India has never been able to secure a similar global standing as it did three centuries ago.

India’s textile sector, covering everything from fibre to garments, has the second-largest employment after agriculture. Textile sector has the potential to double this employment in the next seven years as per the vision document of the union textiles ministry.

Economic survey 2017 had also highlighted the importance of textile sector with regard to generating jobs that are formal and productive, having potential for broader social transformation and generating exports and growth.

It is a sector which not only provides livelihoods to millions of households, but is a storehouse of traditional skills, heritage, and a carrier of heritage and culture too. Artisans, weavers, handloom workers are custodians of designs and skills which they have been inheriting and bequeathing for ages.

This is also a sector which is undergoing a huge churn due to automation, digital printing and the relentless rise of e-commerce. All these three developments threaten to completely change the face of this industry.

Hence the below article assesses what should be India’s strategy to ride this disruptive wave and advocates for the need of national textile policy document, on the same lines of the national telecom policy of 1999, which was a game changer, and led to the upsurge of India’s telecom revolution.

Since then there has been no well-articulated policy for the entire textile sector that shows the proportion of attention and support given to mill fabrics (both private and national corporations), power looms and handlooms, or the government’s vision towards their balanced development of each.

Bangladesh’s garment exports exceeded India’s in absolute terms back in 2003. Today it exports more than $35 billion worth of garments, twice that of India. Even late starter Vietnam overtook India in 2011, and now exports garments worth $32 billion. 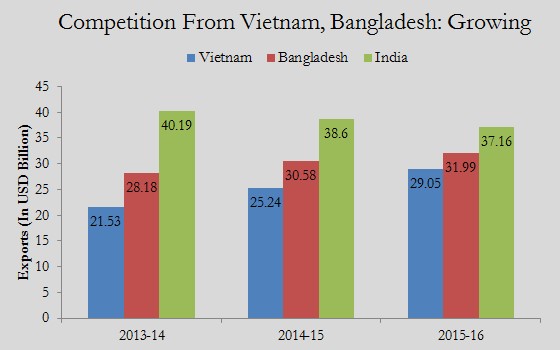 Their growth in exports has been at 20% per year, against India’s 8%. In overall textile trade globally, India has a share of merely 5%, against China’s 39%. In the sub-segment of synthetic fibres, India’s share is just 2%, against China’s 66%.

Therefore, a coherent and holistic national textile policy on the lines of national telecom policy can give a much fillip to Telecom Sector and avoid the risk of losing to countries like Vietnam and Bangladesh. 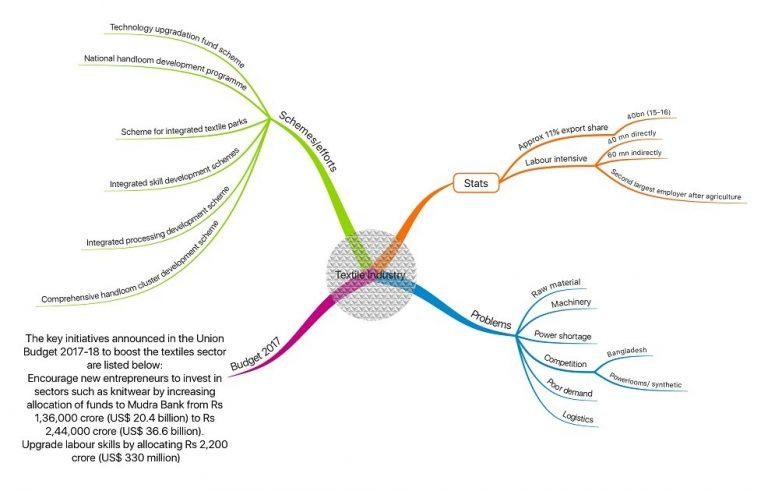 Textiles, along with agriculture, construction and tourism, has large-scale job creation potential. It is a sector dotted with small and medium enterprises, which make up 80% of the units. It is ideally positioned to be a poster child for Make in India. But it needs a national policy and implementation plan, which can address these challenges: changing consumer and fashion trends, a significant demand for investment and modernization of machinery, massive skill upgradation, meaningful export incentives, a fibre-neutral tax policy, a big digital push in design and automation, and lastly, meeting the needs of the e-commerce phenomenon.

The demonisation of Aadhaar card

A vacuum in the valley

1. What are thunderstorms and tornadoes? How do they form? Explain.