Indian Parliament: Evaluating the performance of the 70 year old institution

It is almost 70 years since independence. As an institution, Parliament is central to the very idea of democracy and was assigned a pivotal role in our Constitution by the founding fathers of the republic. Yet, so many decades later, it has neither evolved nor matured as it could, might or should have. If anything, slowly but surely, it has diminished in stature and significance. Indeed, it is now more a symbol than the substance of a vibrant democracy that has taken deep roots among our people.

Role of Parliament and Key Issues:

It is responsible for legislation—laws of the land—by which people govern themselves.

Parliament must ensure accountability of governments—on policies or actions—to the people.

It would appear that governments are more accountable to people at election time than they are to Parliament in session. The examination, analysis and evaluation by Parliament, so essential for invoking accountability, are not quite there.

The only means, it seems, are questions asked by MPs, many of which are pedantic, unclear or on behest. For searching or probing questions, governments do their best to provide as little information as possible in answers.

Engaging in discourse and debate over national issues:

It should engage in discourse and debate on issues that concern the nation and the citizens. How has it fared in performing these roles?

ADR reports that 34% of the MPs in the 2014 Lok Sabha faced criminal charges, as compared with 30% in 2009 and 24% in 2004. The ADR data also show that, across parties, candidates facing criminal charges were more than twice as likely to win as compared to those with a clean record.

Reasons behind decline of Parliament:

There are two reasons for this decline.

1) Parliament does not meet or work long enough. 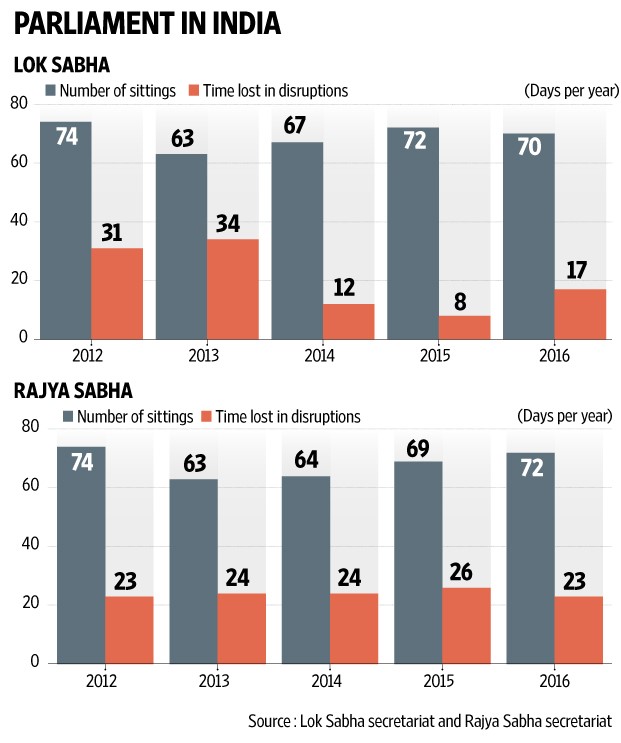 2) Institutional constraints on performance of MPs:

Almost 70 years after we began life as a republic, there is a clear and present danger that we could be the world’s most vibrant democracy with the world’s least effective, and perhaps most dormant, Parliament. It is time for MPs in India to reclaim their rights in Parliament as representatives of the people.

Gender identity: Beyond male and female, the right to humanity

In India the transgender persons are deprived of the fundamental rights available to the other two sexes, i.e. male and female.

“The transgender people, as a whole, face multiple forms of oppression in this country. Discrimination is so large and pronounced, especially in healthcare, employment and education, leave aside social exclusion. Now, it is time for the society and especially policy makers to recognise the rights of transgenders as a separate category and to extend and interpret the Constitution in such a manner as to ensure a dignified life for them.”

Our society often ridicules and abuses the transgender community and in public places like railway stations, bus stands, schools, workplaces, malls, theatres, hospitals, they are sidelined and treated as untouchables, forgetting the fact that the moral failure lies in the society’s unwillingness to contain or embrace different gender identities.

“Social justice does not mean equality before law on paper but translating the spirit of the Constitution, enshrined in the Preamble, the Fundamental Rights and the Directive Principles of State Policy, into action, whose arms are long enough to bring within its reach and embrace this right of recognition to the transgenders which legitimately belongs to them.”

All this can be achieved if a beginning is made with the recognition of transgenders as the third gender. By doing so, the State is not only upholding the rule of law but also advancing justice to the class, so far deprived of their legitimate natural and constitutional rights. It is, therefore, the only just solution which ensures justice not only to transgenders but also to society as well.

Supreme Court’s judgment, on April 15, 2014 in the National Legal Services Authority vs. Union of India case (or NALSA jusgement), asked the government to take steps for the welfare of transgender persons and to treat them as a third gender for the purpose of safeguarding their fundamental rights.

The Bench gave a series of directions to Centre and State governments for enforcement:

In April 2015, when the Rajya Sabha passed a private member’s Bill protecting and providing rights for transgender persons, it looked like a welcome anniversary celebration of the landmark NALSA judgment, or the National Legal Services Authority vs. Union of India judgment.

However, the Transgender Persons (Protection of Rights) Bill, 2016, which attempts to bring the community into the mainstream – is still pending in Parliament.

The Bill seeks to define and provide recognition to transgender persons, prohibit discrimination against them, ensure inclusive education, create a statutory obligation on public and private sectors to provide them with employment and recognises their right to “self-perceived gender identity”. It also seeks to issue a certificate of identity to transgender persons, provide for a grievance redressal mechanism in establishments and to establish a National Council for Transgenders.

The Bill makes the government responsible for chalkingout welfare schemes and programmes which are “transgender sensitive, non-stigmatising and non-discriminatory”. Noting that it is a crime to push transgender persons into begging or bonded or forced labour, the Bill recognises the rights of transgenders persons to live with their families, not to be excluded from such households and enjoy and use the facilities of those households in a non-discriminatory manner.

However, the Bill has number of loopholes:

The Bill states that a person recognised as ‘transgender’ would have the right to ‘self-perceived’ gender identity.  However, it does not provide for the enforcement of such a right.  A District Screening Committee would issue a certificate of identity to recognise transgender persons.

On top of it, the Bill reinforces injurious stereotypes about transgender persons as being part male and part female.

Although the Bill is put forward in high spirits, yet it lacks few provisions like no National/state level Commission, no special transgender courts, no self choice of gender,etc which if addressed could give it more teeth to bring about a change in the society. Moreover, the most important thing is to change the mindset of the society which is the root cause of such discriminatory and abusive attitude towards the transgenders.

It’s not help its work

The Islamic state after Mosul

Is CBI the handmaiden of the government?

The 30-year itch in India-China ties

All for some chicken feed