India and Australia ties and importance of Indo-Pacific region

India and Australia have several commonalities, which serve as a foundation for closer cooperation and multi-faceted interaction, on lines similar to what India has developed with other Western countries.

The relationship has grown in strength and importance since India’s economic reforms in the nineties and has made rapid strides in all areas – trade, energy and mining, science & technology, information technology, education and defence.

With India being the emerging democratic superpower of Asia and Australia with its matured economy, gives more scope for the relationship between India and Australia to be developed and strengthened further.

The shared history with Australia, coupled with the shared democratic values and a strong interest in a secure Indo-Pacific region, provides India with a firm foundation upon which we can confidently pursue future engagement activities in support of joint interests. 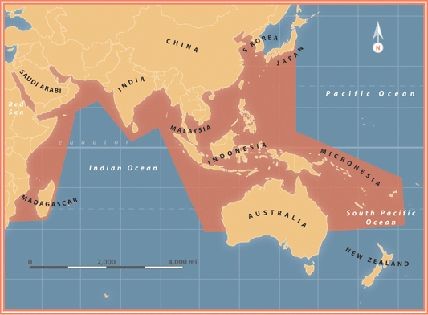 The existing post-World War II (rules-based) order has formed the basis for the extraordinary economic growth we have seen in many parts of the world, and more recently in Indo-Pacific region.

Democratic principles and practices where leaders are accountable and the rights of citizens are respected, sound foreign affairs and  engagement between nations – are essence of this international rules-based system.

However now this rules-based order is under pressure. Strategic competition is leading to unilateral action. Rising nationalism is leading to a narrower conception of national interests, and a more transactional approach to negotiations.

Both India and Australia view that there is a need to build and strengthen international institutions that promote cooperation and manage competing interests in fair and transparent ways, in order to maintain regional and global stability.

Both the countries are determined to strengthen regional prosperity by maintaining an open, integrated regional economy, underpinned by liberalised trade and investment.

Economic growth is transforming the Indo-Pacific region, which is becoming the global strategic and economic centre of gravity.

By 2030, the Indo-Pacific region is expected to account for 21 of the top 25 sea and air trade routes; around two-thirds of global oil shipments; and one third of the world’s bulk cargo movements.

With the region being very important, improving security will be crucial. Under these circumstances the two countries should focus on a greater defence engagement.

India and Australia need to increase our bilateral cooperation and our collective efforts with other like-minded countries. Together we can shape a future region in which strong and effective rules and open markets deliver lasting peace and prosperity — free markets and free people.

As Asia emerging as a pivotal point for global countries in 21st century, both the countries hope to develop a broad-based strategic partnership which covers the economic, political and security dimensions and to achieve this it is prerequisite for both countries to move beyond their comfort zone and learn how to work with each other in new and different ways.

Good governance is basic to all reforms and changes in society. Given the significance of the bureaucracy in India’s development, some of the major changes need to be incorporated in order to improve the bureaucracy’s efficiency and performance.

The PMO has instructed the department of personnel and training to prepare a proposal for middle-rung lateral entry in ministries dealing with the economy and infrastructure.

In 2005, the second Administrative Reforms Commission (ARC) recommended an institutionalized, transparent process for lateral entry at both the Central and state levels.

A newly independent India had pressing concerns about the need for socioeconomic development, the demands of Central planning and the imperative of holding together a new nation subject to internal political pressures. The Constituent Assembly debates make it clear that the civil services were seen as a tool—by Vallabhbhai Patel, for instance—for achieving these objectives. Their creation and functioning thus gave rise to a tribe of generalist administrators whose economic effectiveness was sometimes subordinate to other concerns.

Seven decades later, those dynamics have changed. Some concerns, such as the need for having bureaucrats act as binding agents, no longer exist. Others, such as socioeconomic development, have transmuted to the point where the state’s methods of addressing them are coming in for a rethink.

And new concerns have arisen, such as the shift from the uniformity of centrally planned economic policy to the diverse demands of competitive federalism. The importance of economic effectiveness has risen concurrently.

In a 21st century economy, a quarter century after liberalization, that means the need for specialized skills and knowledge to inform policy-making and administration is more important than ever.

The first ARC had pointed out the need for specialization as far back as in 1965.

The Surinder Nath Committee and the Hota Committee followed suit in 2003 and 2004, respectively, as did the second ARC.

It is both a workaround for the civil services’ structural failings and an antidote to the complacency that can set in a career-based service.

The second ARC report points out that it is both possible and desirable to incorporate elements of a position-based system where lateral entry and specialization are common.

Other areas of reform:

India’s civil services need reform. There is little argument about this. Internal reforms—such as insulation from political pressure and career paths linked to specialization—and external reforms such as lateral entry are complementary, addressing the same deficiencies from different angles. In order to bring in the reforms, there are some supporting conditions that are necessary: First, political commitment for the reforms is essential. Second, the involvement of IAS officers in the change process from the very beginning can accelerate the process.

‘We are slow to adopt science for conservation’

No common ground on the Doklam plateau

Get real on Swachh

In Valley, no magic bullet

There’s no sting in audit committees

RSTV- The Big Picture: Institutes of National Excellence: Do they need Autonomy?