Introduction:
Empowering women to engage in productive employment is critical to achieving not only this SDG but is also pivotal to economic growth, poverty eradication, reducing child mortality, improving maternal health, and attaining universal primary education.

Gender as a new growth driver:

Challenges in closing the gender gap:

Eliminating the obstacles faced by women in economic participation:

Fiscal and financial reforms that eliminate gender gap can play a vital role.

It can increase women’s contribution to productivity growth, job growth, and improve advancement practices that promote talented women into leadership and managerial roles.

National Sample Survey (NSS) data for India show that labour force participation rates of women aged 25-54 have stagnated at about 26-28% in urban areas, and fallen substantially from 57% to 44% in rural areas, between 1987 and 2011.

Women disproportionately face financial access barriers that prevent them from participating in the economy and from improving their lives. Access to credit can open up economic opportunities for women, and bank accounts can be a gateway to the use of additional financial services. However, women entrepreneurs and employers face significantly greater challenges than men in gaining access to financial services.

Keeping the soil healthy is a challenge 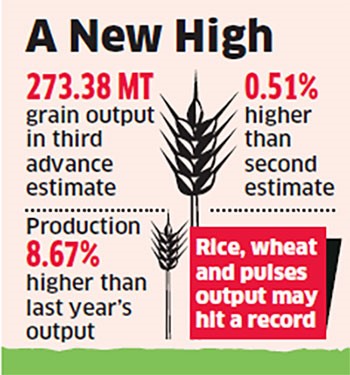 However, this does not automatically imply that all is well on India’s agricultural front.

Therefore, declining soil fertility has become a major threat in agricultural productivity and agro-economic scenario. India is under serious threat of losing its food surplus status in the near future. According to estimates, the demand for foodgrain is expected to increase from 192 million tonnes in 2000 to 355 million tonnes in 2030.

If we do not take this disturbing trend into account and start acting now, our country might be saddled with vast swathes of land rendered infertile.

Enhancing sustainable food production through improved soil health is not just the job of the Government and cultivators. The agrochemical industry also has a responsibility to invest with renewed vigour in biological products that can rejuvenate soil health organically.

At the same time the need of the hour is to educate farmers about what they can do to improve the health of their nutrient-depleted soil by following practices such as crop rotation, and using organic manure boosters such as cow dung and dried leaves.

It is also pertinent to educate them about the judicious use of agrochemicals and attain a fine balance between chemical and organic products — both of which are critical to India’s food sustainability goals.

The elephant in the room

No logic in extending length of patents

MOTIVATION: UPSC Prelims Results, 2017 – Get Over It! (Both Qualified and Non-qualified Aspirants Should Read This)