1. What are thunderstorms and tornadoes? How do they form? Explain.

Thunderstorm are local weather phenomenon which is characterised by cumulonimbus cloud, heavy precipitation and is always accompanied by thunder and lightening

Three basic ingredients are required for a thunderstorm to form: moisture, rising unstable air (air that keeps rising when given a push), and a lifting mechanism to provide the upward push. Conditions favorable for the formation of thunderstorm are regions where cold and warm airmasses meet, or, where air is forced to move upwards off of an obstacle like mountains etc.

Thunderstorms have three stages in their life cycle: The developing stage, the mature stage, and the dissipating stage.

Developing stage: The developing stage of a thunderstorm is marked by a cumulus cloud that is being pushed upward by a rising column of air (updraft). The cumulus cloud soon looks like a tower (called towering cumulus) as the updraft continues to develop. There is little to no rain during this stage but occasional lightning. 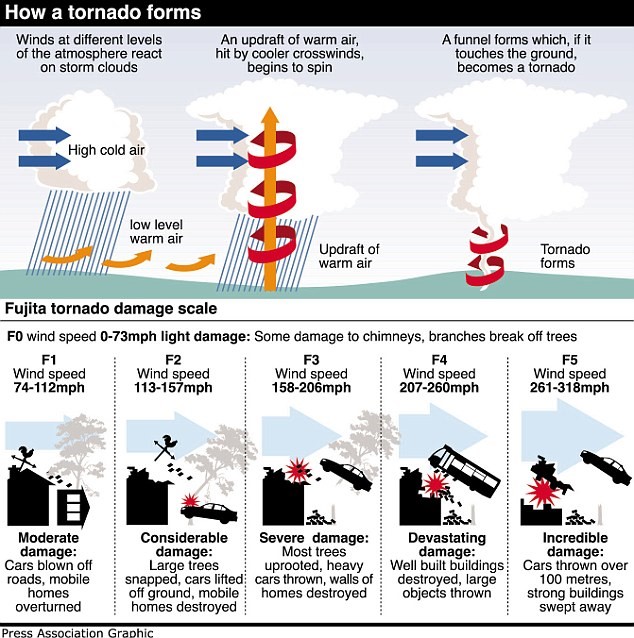 A tornado is a violently rotating column of air that extends from a thunderstorm to the ground. It is a vortex of rapidly moving air. A tornado forms when changes in wind speed and direction create a horizontal spinning effect within a storm cell. This effect is then tipped vertical by rising air moving up through the thunderclouds.

Winds within the tornado funnel may exceed 500 kilometers per hour. High velocity winds cause most of the damage associated with these weather events. Tornadoes also cause damage through air pressure reductions. The air pressure at the tornado center is approximately 800 millibars (average sea-level pressure is 1013 millibars) and many human made structures collapse outward when subject to pressure drops of this magnitude.

Wind shear is the most important factor that plays into the creation of tornadoes. When there is wind shear, sometimes these winds begin to roll into a horizontal column of air.

Once you get a strong updraft of air being transported from the ground to the atmosphere, that column of air becomes vertical. That is when a storm usually develops in this scenario.

2.Discuss the onset, progress and retreat of monsoon in India. Why there are breaks in monsoon? Why do they occur?

Monsoon is the seasonal variation of the wind. It results into rain in length and breadth of India.

During April and May when the sun shines vertically over the Tropic of Cancer, the large landmass in the north of Indian ocean gets intensely heated resulting into intense low pressure in the northwestern part of the subcontinent. Since the pressure in the Indian Ocean in the south of the landmass is high as water gets heated slowly, the low pressure cell attracts the southeast trades across the Equator. These conditions help in the northward shift in the position of the ITCZ. The southwest monsoon may thus, be seen as a continuation of the southeast trades deflected towards the Indian subcontinent after crossing the Equator.

The southwest monsoon sets in over the Kerala coast by 1st June and moves swiftly to reach Mumbai and Kolkata between 10th and 13th June. The monsoon may burst in the first week of June in the coastal areas of Kerala, Karnataka, Goa and Maharashtra while in the interior parts of the country, it may be delayed to the first week of July. As these winds approach the land, their southwesterly direction is modified by the relief and thermal low pressure over the northwest India. By mid-July, southwest monsoon engulfs the entire subcontinent

The triangular peninsula of India breaks the monsoon into two – 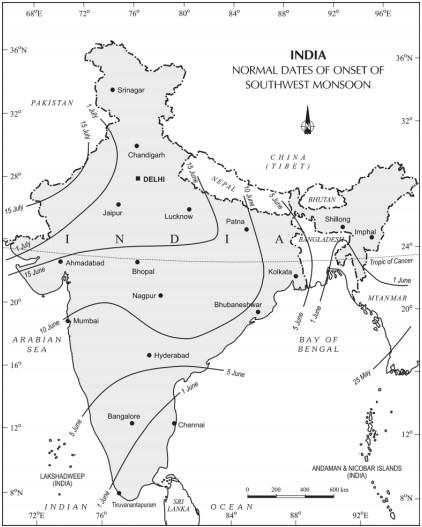 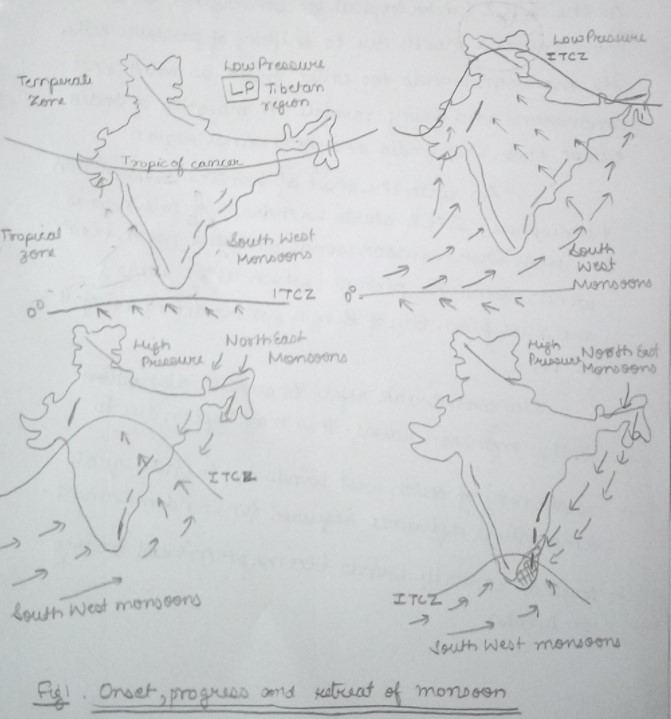 The months of October and November are known for retreating monsoons. By the end of September, the southwest monsoon becomes weak as the low pressure trough of the Ganga plain starts moving southward in response to the southward march of the sun. It is because of high pressure in Tibetan high (weakening ITCZ & snowfall in Tibet region) and creation of trough or LP in Indian Ocean (warmer) that the wind reverses its direction and starts flowing as north-eats trade wind bringing rain to Coromandel Coast area, WB, etc. This process is more gradual than on-set. It begins in NW states of India by early September and completely retreats by mid-October.

Break in the monsoon:

During the south-west monsoon period after having rains for a few days, if rain fails to occur for one or more weeks, it is known as break in the monsoon.

Thus monsoon as a phenomenon remains a complex one.

3. Vegetation of a region adapt to its climatic conditions. Illustrate with the help of suitable examples. 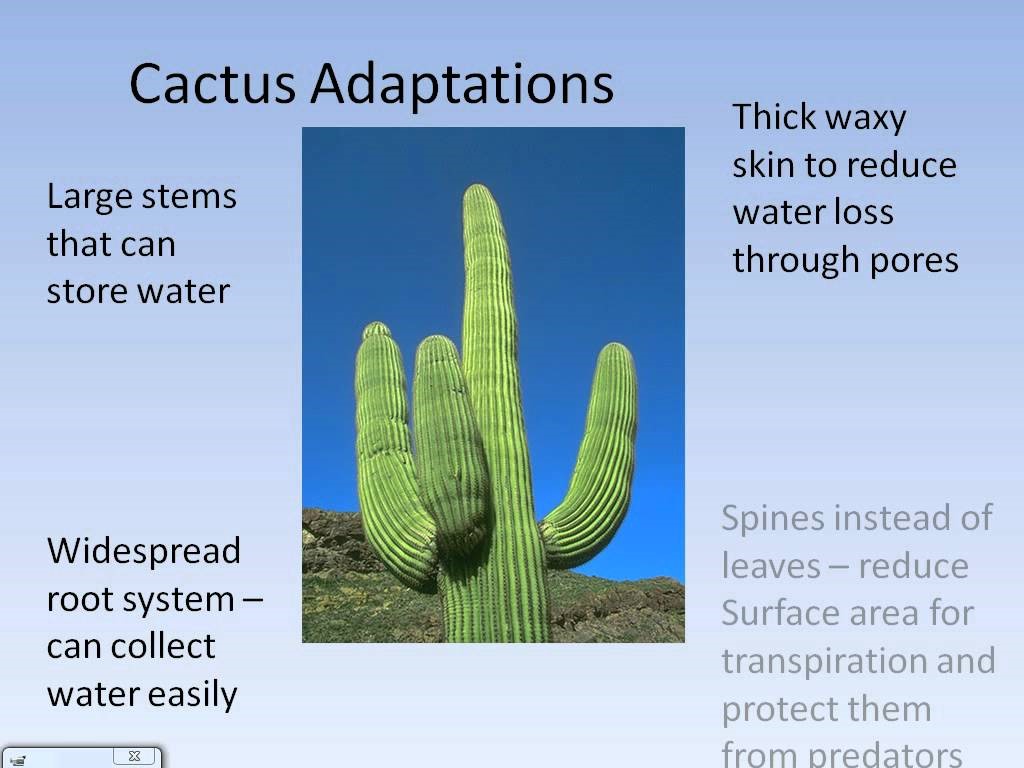 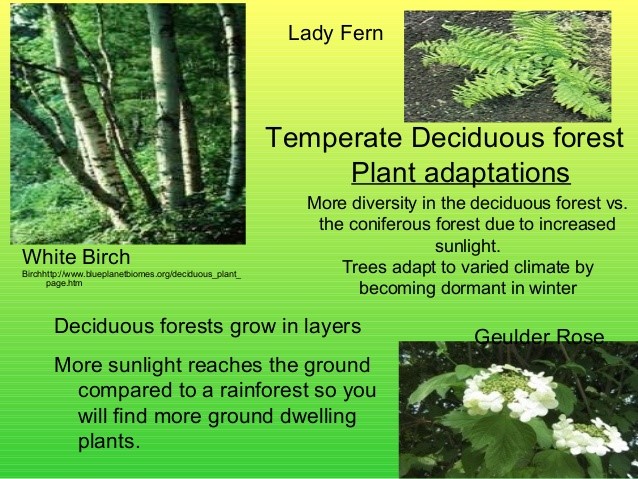 4. Discuss the advantages of GST. How does GST help in unifying the market in the country? Explain.

GST is a comprehensive, multi-stage, destination based tax levied on every value addition which is aimed at implementing a unified tax system throughout the country – One Nation One Market One Tax.

GST has been touted as the next revolution in Indian economy after the LPG reforms of 1991. It is an effort to unite the entire country under a single system of indirect taxation.

– Easier tax system: IT interface as easy as operating a facebook account, No direct interaction with tax officials==>Saves time, money and less corruption

– Uniformity in tax structure throughout the country

– Removal of cascading and hidden costs

How will it help in Unifying Market?

It will help in unifying Indian market since-

1) All the goods and services will be given at same price in all the states.

3) Online filing- simple online procedure to file return which can be done easily across the length the breath of India.

4) It is expected that the introduction of GST will increase the tax base but lowers down the tax rates and also removes the multiple point This, will lead to higher amount of revenue to both the states and the union.

5) Removing the trade barrier since no octroi tax, it will speed up the business and transportation.

Thus the uniformity in taxation across the country will help in unifying the market. Bringing petroleum under the ambit of GST in later stage will further consolidate this unification.

GST is the amalgamation of various central and state indirect taxes to have one India one tax. This is believed to be a game changer as it will unify the Indian market.

1) Cascading effect- which is tax on tax, GST will remove this hence bringing down the cost.

5) It will make the Indian market more competitive than before and create a level playing field between large & small enterprises and ease of doing business.

6) GST will ensure boost to exports. When the cost of Production falls in the domestic market, Indian Goods and services will be more prices competitive in foreign markets.

It will help in unifying Indian market since-

1) All the goods and services will be given at same price in all the states.

2) Defined treatment for e-commerce hence no hidden agenda unifying the market.
3) Online filing- simple online procedure to file return which can be done easily across the length the breath of India.

4) It is expected that the introduction of GST will increase the tax base but lowers down the tax rates and also removes the multiple point This, will lead to higher amount of revenue to both the states and the union.

5) Removing the trade barrier since no octroi tax, it will speed up the business and transportation.

GST is the biggest fiscal reform of the decade curtailing it shortcoming like centre state consensus, min no. of slabs etc will boost India’s growth.

Radicalization is a process by which an individual or group adopts extreme political, social or religious ideals that reject or undermines the status quo.

Radicalization in J&K has three dimensions regional, ethnic and religious.

There is no greater medicine to overcome distrust and distress than development urgent need to implement initiatives like NAI ROSHINI, improve employability of youth by skills training, provide jobs so that the spirit of KASHMIRIYAT (peaceful co-existence) can be restored in the valley.

While militancy in Kashmir has been a problem since the 1980’s, the current round of tensions has seen disturbing new trends: This radicalization of the youth in particular jeopardizes the national security as:

While a permanent solution to Kashmir may take some time, efforts are needed to ensure inter alia counter messaging, and employment opportunities, to wean the youth away from militancy.