In news: A national anti-naxal strategy meet was held by the Union Home Minister. It included of chief ministers of Chhattisgarh, Jharkhand, Odisha, Bihar, Maharashtra, Telangana, Uttar Pradesh, Madhya Pradesh and Andhra Pradesh. Also, secretaries of the central ministries, chief secretaries and director generals of the respective state police of the LWE-affected states along with the union ministers in charge of Ministries of MoRTH (Ministry of road transport and highways), Railways, Civil Aviation, MoRD (Ministry of rural development), Power, New and Renewable Energy and Telecom were present.

Need for the meet

In March and April alone, two big attacks had been done in Sukma where CRPF lost 37 men.

After demonetization, the government thought that the backbone of naxalism had been broken. But there were two back-to-back attacks which inflicted heavy loss of lives of the soldiers. This shows the lack of proper policy approach by state government, central government, technical feasibility of forces dealing with them, utilization of ground and electronic devices in the operations.

When Union Home Minister visited to pay last respect to the martyrs, there it was decided to bring in the meeting. 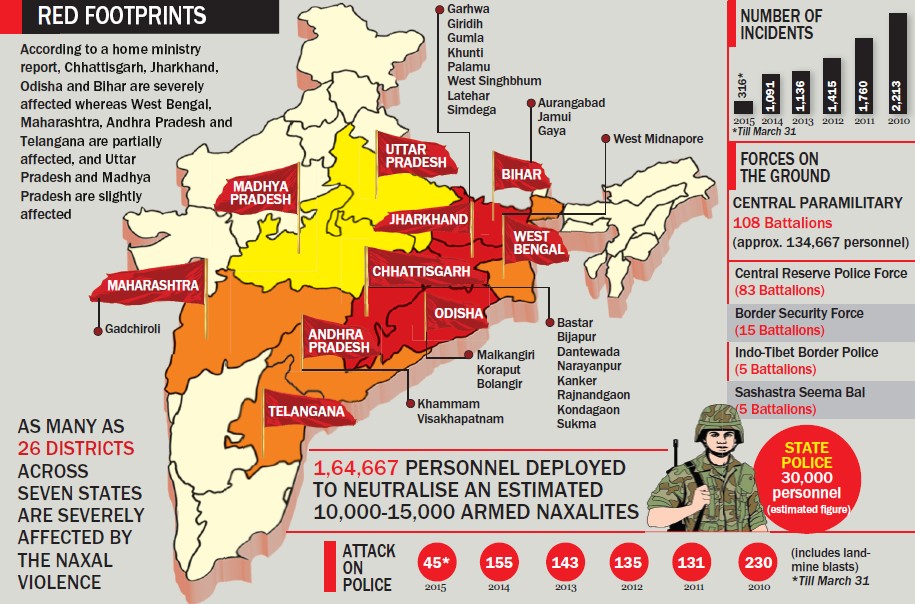 For the naxal affected states like Chhattisgarh, Jharkhand, Andhra Pradesh and Telangana, there is need of short term, medium term and long term policies need to be formulated at different levels and it lies in the SAMADHAN strategy. It involves

Apart from this, there is need of good leadership for the security forces, especially the need for unified coordination and command.

Use of latest technology in dealing with guerrilla warfare or jungle warfare. The terrain is extremely treacherous, heavily forested and the local population knows the lay of land, much better than outside forces. In such a situation, more than the technological aid, the use of local intelligence and help can be of more usefulness.

India has drones and UAFs of Israel and USA to gather tactical intelligence over naxal areas in Chhatisgarh and Odisha. The National Technical Research Organisation (NTRO) which has based in Raipur for two years for operating the UAVs. There are various helicopters on call for helibound operations. The problem is how to utilize them in operations.

The terrain is very difficult as far as government troops are concerned excluding the trained troops of state police. The CRPF being a central organization is not well aware of the geography. Here they can us drones to find out their challenges ahead. So when they are in operation, they can come to know the intelligence and location of Naxalites. But there is information supplied in real time which creates further challenges.

The pivotal thing in the fight against naxalism is that the concerned state should take the responsibility and duty of any operations undertaken. It is should not be by the central paramilitary forces to go there for operations but mainly in aid to the state government force.

The union minister must impress upon political leadership of the respective states that their own law and order enforcement agencies- police, Indian Reserve Battlaiion, state special IRB must own up the anti-naxal operations and strategy.

While the political direction is clear from Home minister’s side and CM’s side, somehow the civil administration and state police are not taking up the challenge with the kind of spirit required to deal with such forces. In sukma belt, the lack of state government participation in tackling the situation seriously is hampering the cleaning up of area. After the clearance of the area by security forces, there is a need to hold the ground for the development to take place. It can happen when the civil administration comes into place. Thus, it is a coordinated affair of the district authorities and police to act to act together with adjacent states and their districts. The state concerned should have coordination with air force, BSF, ITBP, CRPF and NTRO and go fully offensive in bastar, sukma to remove the Naxalites stopping the development.

The bosses of the civil administration and police were also present. The top officials have to take back the message from this meeting and implement on the ground. The offensiveness and the spirit to fight against the naxal should continue.

MOTIVATION: What is More Powerful than Your Self-Doubt?